He was built to excel!

The American Quarter Horse is an American breed of horse that excels in so many ways that it's just hard to know where to start. They are just amazing horses.

The American Quarter Horse got its name from its ability to out-distance other breeds of horses in races of a quarter mile or less. Some have been clocked them at speeds up to 55 mph.

This wonderful breed of horse has shown an amazing ability to adapt to different training methods, riding and working conditions, outside influences, and an assortment of different situations. This has allowed this breed to be used in other occupations such as using them in "dude ranches" for trail riding by people who have never been on a horse, to being used by many urban mounted police units during Occupy protests and riots.

Part of the reason that they do so well is their disposition. The breed as a whole has an even temperament. This makes them a great animal for both the novice and the veteran rider. It is the reason that the American Quarter Horse is by far the most popular breed in America.

But don't think that American Quarter Horses are only for Cowboys, they are also shown in English disciplines such as dressage and driving - as well as many other equestrian activities like say being good hunter jumpers.

Back in the late 1700s, the Colonists came across a horse breed that combined the English horses with the Chickasaw breed. The Chickasaw horses were direct descendants of the Arabia and Barb horses that were brought into the Southeast United States by the Spanish Conquistadors.

What they had was a small, sturdy horse that was quick and nimble and showed signs of superior intelligence and a willingness to work. As flat track horse racing became popular, this fast small horse, achieving speeds of up to 55 miles per hour over short distances soon dominated the quarter mile track. It was properly named "The Quarter Miler" or "Quarter Horse."

As the breed continued to gain popularity, its gentle nature led it to be used as a riding horse. Its adaptability soon had it working on early farms. But because this breed has a natural instinct for working cattle, it excelled in ranching.

When pioneers and settlers started coming West in the 1800’s, these settlers encountered horses that descended from the Spanish stock Hernán Cortés and other Conquistadors had introduced into the vice-royalty of New Spain. Today this area is called the Southwestern United States and Mexico.

These horses of the West included herds of feral animals known as Mustangs, as well as horses that were domesticated by Native Americans, including the Comanche, Shoshone and Nez Perce tribes. Of course the Nez Perce tribe is famous for saving the Appaloosa.

As the Colonial "Quarter Horse" was crossed with these western horses, the pioneers found that the new cross-breed horse had innate "cow sense," a natural instinct for working with cattle. This made the "Quarter Horse" extremely popular with cattlemen on ranches.


As with most activities undertaken by the early cowboys, the duties performed by them and their horses, quickly turned into competition. That in turn set the stage for rodeo riding, and the quarter horse excelled at calf roping, team roping and barrel racing. Today, the American Quarter Horse is still the horse of choice for rodeo events.

The main duty of the ranch horse in the American West was working cattle.

Even after the invention of the automobile, horses were still irreplaceable for handling livestock on the range. Because of that fact, major Texas cattle ranches such as the King Ranch, the 6666 (Four Sixes) Ranch, and the Waggoner Ranch played a significant role in the development of the modern American Quarter Horse.


The skills needed by cowboys and their horses became the foundation of today's rodeo, a contest which began with informal competition between cowboys and expanded to become a major competitive event throughout the West.

As I said before, still to this day, the Quarter Horse dominates the sport both in speed events and in competition that emphasizes the handling of live cattle.

But, back in the early days, sprint races were also popular weekend entertainment and racing became a source of economic gain for breeders as well. As a result, more Thoroughbred blood was added back into the developing American Quarter Horse breed.

And yes, the American Quarter Horse also benefited from the addition of Arabian, Morgan and even Standardbred bloodlines.

Then in 1940, the American Quarter Horse Association was born at a meeting in March in Fort Worth, Texas.

It happened when a group of 75 horsemen and ranchers from Texas decided to dedicate an organization to preserving the pedigrees of their ranch horses. They decided to form the American Quarter Horse Association (AQHA) with the intent of preserving the breed.

Since the American Quarter Horse formally established itself as a breed in 1940, the AQHA "Foundation" stud book has remained open to additional Thoroughbred bloodlines via a performance standard.

Foundation bred Quarter Horses are a distinct part of our American heritage, which can only be maintained by the careful selection and line-breeding of the legendary lines.

These lines are irreplaceable and are being carefully maintained and promoted by AQHA members.

His conformation was as good as it gets, the Poco Bueno line is that of the true American Quarter Horse.


When you put Poco Bueno in a cutting arena - he became a blur of lighting-fast speed. As a 4-year-old, in 1948, Poco Bueno started his performance career as a cutting horse, and his amazing ability helped him to quickly acquire an impressive record - and a legion of fans. He was the first quarter horse to be insured for $100,000.00.
﻿﻿﻿﻿﻿﻿﻿﻿

There is a reason for my fondness of Poco Bueno, he was the pedigree that my horse Murphy whose AQHA registered name was Tivios Lacey originated from. I lost Murphy last year, and yes, I'm still not over losing him.

Murphy's conformation was outstanding. It was helped by the fact that his lineeage also included Poco Tivio - who was known for both his conformation and his cow sense.

Poco Tivio was a true cow horse. He was the first foal of Poco Bueno and one of the first horses to bring the blood of King to the West Coast. He became a legend in his own time and left us with the legacy of his ancestors. PocoTivio was a pure cow horse.

My boy Murphy was a great example of what the American Quarter Horse lineage looks like when it is carried on.

﻿﻿﻿﻿The resulting offspring is registered in the "appendix" of the American Quarter Horse Association's studbook, hence the nickname.

Horses listed in the appendix may be entered in competition, but offspring are not initially eligible for full AQHA registration. If the Appendix horse meets certain conformational criteria and is shown or raced successfully in sanctioned AQHA events, the horse can earn its way from the appendix into the permanent studbook, making its offspring eligible for AQHA registration.

﻿﻿For some, like me, who argue that the continued infusion of Thoroughbred bloodlines is beginning to compromise the integrity of the breed standard, favor the earlier style of horse, some have created separate organizations to promote and register "Foundation" Quarter Horses.

With the internationalization of the discipline of reining and its acceptance as one of the official seven events of the World Equestrian Games, there is a growing international interest in Quarter Horses. Countries like Japan, Switzerland and Israel that did not have traditional stock horse industries have begun to compete with American Quarter Horses in their own nations and internationally. 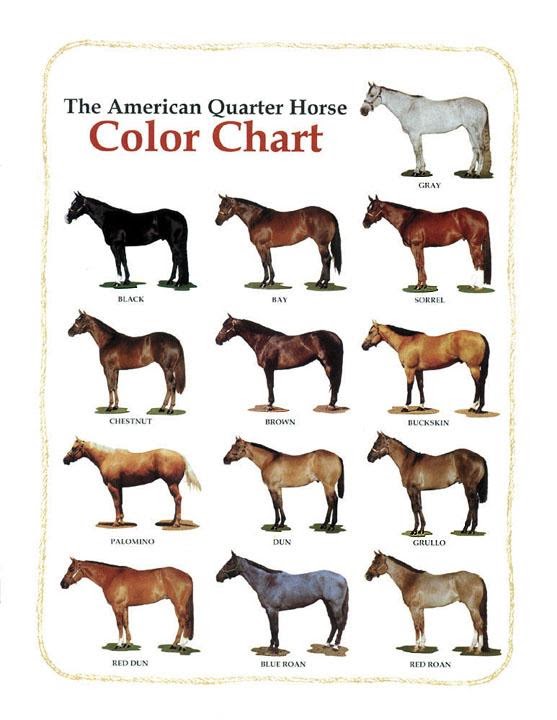 In the past, spotted color patterns were excluded, but now because of the use of DNA testing to verify parentage, the registry accepts all colors as long as both parents are registered.

The American Quarter Horse is known for its small, short and refined head and straight profile as well as a strong, well-muscled body, a broad chest, and powerful rounded hindquarters.

Standing between 14 and 16 hands, they are bred with two main body types in mind: First we have the "stock type," which is more compact and muscular yet extremely agile, and then we have the "racing type" that are usually taller with smoother muscles typically trained for running quarter mile races.

One common denominator is that all Quarter Horses have speed, power and are more than willing to please their owners. It's their stamina, endurance, and temperment that make them the cowboy's choice. And for a working cowboy, a good quarter horse is worth it's weight in gold.