The Great Cowboy Strike Of 1883 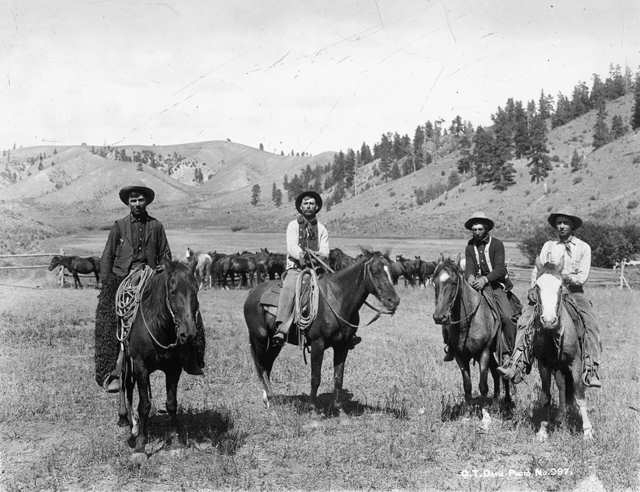 A reader from Australia has written to ask the curious question. She wants to know if cowboys had Labor Unions in the American Old West?

Well, I have to be honest and say that this made me sort of laugh at first. I laughed because I figured that the last folks who would have ever want to start a Labor Union for themselves would be cowboys. But frankly, I found out that I was wrong.

Though the era known as the "golden age of cowboys" is the 1880s, America has always had cowboys in one way or another. The first American cowboys were those hands in Florida. They can trace their lineage to the 1600's Spanish Vaquero. The cowboys in the West, those originated from the Spanish and Californio Vaquero traditions prevalent throughout the West didn't come about until much later.

As for ranches, the Spanish had ranches in North America long before the arrival of the Brits and other Europeans. Mexicans had cattle ranches long before the European settlers in Texas or California ever did. Fact is, Americans cattle ranching has only been around for a little more than 200 years.

Cattle ranching in our nation has established itself as a huge part of our American culture, A cattle rancher owns the ranch and the cattle. Ranchers hire workers. Today those workers can be anything from breeding specialists and nutritional in cow/calf operations to barn managers and mechanics to keep the machinery going.

It's true, modern cattle ranches are full-time operations with a number of duties having to be preformed. These days, besides the normal ranch work of branding and tagging, giving vaccinations, and being aware of calving and feeding, facilities need to be managed, fences and outbuilding need to be maintained, there's hay and grain storage that needs to be monitored and replenished, pastures have to be rotated and monitored, transport trucks and trailers need to be maintained, and the list of duties goes on.

Things were different in the 1800s in that they were not so complex.  But even though that was the case, one of the things that has not changed is that cowboys worked for ranchers then and they do today. And yes, just as with any employee/employer relationship today, cattle ranchers themselves were not always the easiest bosses to get along with back in the day. In fact some were condescending individuals who treated those working for them horribly.

It is said that some ranchers treated their men no different than slave labor with below normal wages, hard work, and little sleep. Those ranchers were known to skimp on food and even bunkhouse needs. Many of the bunkhouses were known to leak in the rain, be freezing in the winter, act as sweatboxes in the stiflingly heat of summer, all while the beds were lice infested.

During the heyday of the cattle boom from 1867 to 1887, it's said a cowboy could work for the ranch that treated him the best. In those days, cowboys were pretty much able to pick and chose who they wanted to work for simply because the need for hands was great at the time. But later when the cattle boom was starting to go bust, that was when things turned sour and life for a cowboy became miserable on the ranch.

The romantic notion of cattle ranchers treating hired hands well is very much a storyline fabricated in Hollywood. While there were many ranches that did treat their hands very well, a large number of ranches treated cowboys harshly and with very little respect. It was typical for a lot of ranches for a number of reasons. The number one reason is because cowboys in the 1880s were plentiful.

So why were some ranchers great to work for while others weren't? Well, the primary reasons for that had to do with economics and in some cases who owned the ranch. In the West during that time, a large number of ranch owners were investment companies and corporations located back East. And yes, a great number of ranches were owned by Europeans.

Westerners didn't have control of the ranching industry in the West at that time. And along with taking control, those companies and corporations had an unfriendly way of treating their employees. And as far as many ranches were concerned, especially those owned by European Cattle Barons, cowboys were more like subjects and they the rancher was royalty. It's true, many of the ranches owned by Easterners and Europeans saw themselves as being superior to cowboys. They saw cowboys as a lower class of people.

Remember, the first cattle drives started in 1867. But within less than 20 years, there would be a beef glut. Initially cowboys were needed by the score. And with the closing of of open ranges and the end of cattle drives, less and less cowboys were needed. By the end of the cattle boom in the late 1880s, it's said that there were thousands of cowboys out of work. And for those working, the conditions were pretty bad in most cases.

Because of this, a number of the cowhands gathered together to form a Labor Union. They even went on strike. They did because they wanted better wages, better working conditions, and be compensated for their expenses. The first major national Union was the Knights of Labor. It was the Knights of Labor Union that a number of Texas and Kansas and even Oregon, Montana, and Wyoming cowhands joined.

The Knights of Labor, officially known as the Noble and Holy Order of the Knights of Labor, was the largest and most important labor organization in America in the 1880s. The Knights promoted the social and cultural uplift of the workingman while rejecting Socialism and Anarchism which may other labor Unions would adopt around World War I. For me, I find it interesting that the Knights of Labor are said to have fought for an eight-hour day while promoting the ethic of Republicanism.

Today it is better known as the Cowboy Strike of 1883.

In West Texas during that time, a large number of ranch owners were investment companies and corporations from back East. And yes, a large number of ranches were also owned by Europeans. It is said that the folks from back East and those in Europe actually gained control of the ranching industry in the West at that time. Along with taking control, those companies and corporations had an unfriendly way of treating their employees. And as far as some of the Easterners were concerned, cowboys were merely employees. As for the Europeans, they saw cowboys as peasants.

Along with looking at hired hands as strictly employees, many of the traditions held in place for years were then being dismissed. For example, on some ranches, bunkhouse doors were left unlocked so that an out of work cowboy through could have a place to rest and maybe grab a bite to eat. In exchange it was said that he's perform an few odd job such as mending a fence, or chopping wood. Well that stopped.

Another example is that it was customary to allow a cowboy working on a ranch to have the option of taking part of his pay in calves, usually unbranded "mavericks." They were allowed to even run small herds on their employer's land.

As some folks might not know, "mavericks" are unbranded range cattle. They were usually calves that had become separated from their mothers. Traditionally, these were considered the property of the first person who brands it. And yes, for many a cowboy these cattle were seen as the foundation of a ranch of their own in the future.

Well because the mavericks were seen as company property, the cattle ranchers put a stop to that immediately. Those ranch owners were only interested in expanding their holdings and increasing their profits. And to the surprise of many at the time, another huge change that took effect was that ranchers started to insist that cowhands work only for wages and be treated no differently than any other laborer.

Of course as anyone who has worked on a ranch can testify, ranching requires long hours and many skills even back then. Most cowboys in the early 1880s were paid on average about $40 a month. There were problems with that since ranching is an ongoing operation, as it is even today.

So now, some speculate that the problems between cattle ranchers and working cowboys may have had been because of the class systems which were prevalent back East and in Europe. Some say it was a notion on the part of cattle ranchers that they were superior to those they employ. But for whatever reason, the ranchers created a great deal of discontent among the cowboys in the region. Yes, so much discontent that a large number of cowboys decided to strike.

One source states that it was seven ranches. Another source states that the 2½-month long strike was against five ranches. Some have said those ranches were the LIT, the LX, the LS, the LE, and the T Anchor. Either way, in late March of 1883, cowboys a number of ranches drew up an ultimatum demanding higher wages and better working conditions.

They submitted it to the ranch owners. And yes, it's said that 24 cowhands signed it, There piece of paper set March 31st as their strike date. The original organizers of the strike actually established a small "strike fund." They also spread the word to other ranches to persuade other cowboys in the area to honor the strike.

Reports on the number of people involved in the strike ranged from 30 to 328. Actually, the number changed as men joined and deserted the walkout. And since it's said that timing is everything, it was the wrong time for a "Cowboy Strike".

With a full month remaining before the spring roundup, ranchers had plenty of time to hire out-of-work cowboys to replace the striking cowboys. But even though that was the case, the strike did changes a few things as some ranches put on a few more permanent hands instead of seasonal hands, some increased wages, some cleaned up the bunkhouses, and some ranches were said to have put on better chuck for their hands.

As for the strikers, most of the ranches effected by the strike simply fired the strikers. Of course, most of the effected ranches even went a step or two further than that and created a "Blacklist" to blackball some cowboys who they saw as agitators. Since most ranches belonged to Stockman's Associations there in Texas, for many years many of these Associations kept lists of names of cowboys who had been "Blacklisted" or "Blackballed" from working as a hand.

Many of those names were those of cowboys who were the organizers. Most of the blacklisted cowboys were also those who made threats to new hires, replacement cowboys, and even ranch managers. Many of the cowboys listed would never work as cowboys again in that area and were forced to move on. They either found work as cowboys somewhere other than Texas, or simply found other occupations as a result of being "Blacklisted."

"The Great Cowboy Strike of 1883" as it was known at the time was actually pretty small. It is said to have involved large corporate ranches. Yes, most with strange ideas of how to treat those they employed.