"Just Following Orders" Is Not A Defense 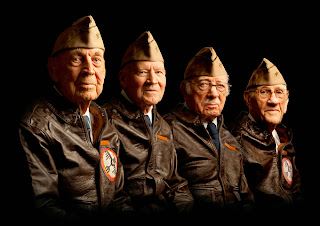 On October 11th, it was reported that the remaining Doolittle Raiders will gather in Dayton, Ohio, for a final time next month.

The revered World War II heroes will lift their goblets, sip their 117-year-old cognac and say good-bye to a decades-old tradition of gathering with their comrades to reflect on their contribution to American history.

“It’s bittersweet,” said Wes Fields, who has served as the Raiders’ security guard and escort for decades.

He will attend the toast at the National Museum of the Air Force on November 9th.

“You want to be involved in it, but in a sense you don’t because you dread it. It’s coming to an end,” Fields said.

It was the first retaliation after Pearl Harbor, and while the physical damage to Japan was minimal the raid was a tremendous boost for morale back home.

Nearly every year since the raid, the men had gathering for a reunion —the last of which was held in Fort Walton Beach earlier this year.

As part of the tradition, they hold a toast before a set of 80 goblets engraved with each Raider’s name.

After the toast, they overturn the goblet of any Raider who passed on that year.

They will open the famed bottle of Hennessy Very Special cognac from 1896, the year Jimmy Doolittle was born.

They will lift their goblets, sip their 118-year-old cognac and say goodbye to a 71-year-old tradition of gathering with their comrades to reflect and remember their contribution to American history.

Lt. Col. Robert Hite, 93, likely will not attend because of his health.

So now you ask, what does this have to do with just following orders?

As a Marine, I swore an oath to defend my country and the Constitution of the United States.

If at any time I believed that what my Officers or NCOs ordered me to do was an "Unlawful Order," an illegal order, then I was obligated to not follow that order.

The defense "I was only following orders" is not accepted as a valid defense against prosecution when a Marine is involved in illegal activity and a "reasonable man" would know the orders were illegal.

So what are illegal orders?

As a Marine, I had to respond to orders promptly - and I did exactly that. As a Marine, I was taught to "Do it, then Bitch" - that is if you had some sort of beef about  what you were being "ordered" to do.

What if I were ordered to risk your life or endanger the lives of others by doing something that I knew full well was outside of combat SOP (standard operating procedures) - or outside of approved training?

I can tell you right now that as an Instructor, yes some of these situations did in fact come up.

What if my orders meant that I would violate your rights, or the rights of others guaranteed to all Americans by the very Constitution that I swore to protect and defend?

What if your orders assault your sense of right and wrong, as say in the case of those troops at Abu Ghraib prison who went along with the program and simply followed unlawful orders by torturing those prisoners?

So now, think of this.

Just this week, President Obama ordered barricades to be set up as he imposed security with K-9 units in riot gear to keep heroes like Doolittle's Raiders away from their memorials.

Those memorials do not normally have security or barricades, and they certainly do not belong to the President of the United States.

During the shutdown, President Obama wanted to inflict as much discomfort on the American people - so Obama did what it took to keep Americans away from their memorials and national parks.

He tried to do this at Mount Rushmore, the Grand Canyon, and wherever Federal Parks were located throughout the entire United States.

Yes, when Obama throws a fit and wants to inflict pain upon the American people he certainly knows how.

Not only is Obama criminal for doing such a thing, those who followed his orders are as guilty as he is and should be tried in a court of law.

Their crimes, the heads of these National Parks, is the same as those who blindly following orders that enabled the Nazi regime to come to power and the death of millions.

Besides Nazi Germany, and yes I've already mentioned Abu Ghraib prison, World History has many examples of people "just following orders" at the cost of life and liberty.

Blindly following orders, unlawful, illegal orders, especially when you know it is wrong, is about as anti-American as can be. It is also criminal and those who were the lackeys who did such a thing should be tried for it - jailed if possible but being fired is a must!

And yes, now that I see the stooges in the National Parks Service doing it - I can't help but wonder what other government agency would follow orders they know is wrong and only meant to inflict pain on their fellow citizens?