Are The Feds Hoarding Ammo? 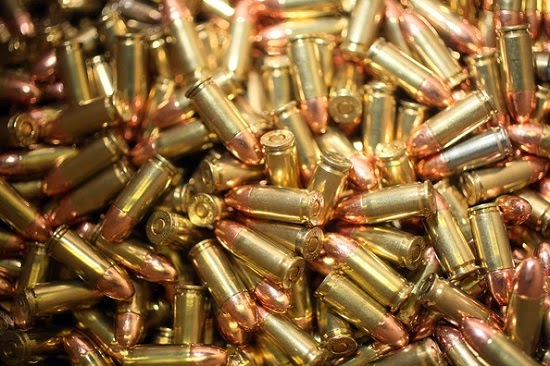 In a dictatorship, those in power must always find a way to stop the people from having a means to fight their oppressors.

Would the President of the United States use government agencies to create an ammunition shortage to deprive Americans of a way to defend themselves?

Would Obama use his cabinet departments in a plan to install gun control on Americans by buying up the available ammo?

Many believe the Obama administration is saying, "Sure you still have the right to keep and bear arms -- but without ammo!"

He is doing this by using government agencies to spend parts of their operational budgets to buy huge quantities of ammunition in an effort to keep ammo out of the hands of the public.

Can anyone answer the questions:

1) Why does the Department of Homeland Security (DHS) needs 1.6 Billion rounds of rifle and pistol ammunition?

2) Why does the Department of Homeland Security (DHS) needs 25 Million rounds of shotgun ammunition over the next 5 years?

Homeland Security’s stockpile of weapons and ammunition grows larger, yet now recent reports indicate the DHS is soliciting bids for 25 million rounds of shotgun ammunition over the next five years.

Last February, the U.S. Department of Homeland Security posted a solicitation to federal suppliers for a potential purchase of 1.6 Billion rounds of ammunition.

The agency said that agents in training fire a lot of bullets, and DHS gets a better price if it buys in bulk.

That answer did not satisfy those who believe that the DHS was preparing employees in case of an armed insurrection against the federal government.

The reason that their answer was not believable is the amount of ammo obtained by the DHS -- it was enough ammo to wage both the Iraq and Afghanistan Wars for 20 years.

Why do they need that much ammo?

While the potential use of such ammunition is ambiguous, the overwhelming amount of ammunition being requested is not.

This is hardly the first such solicitation made by the agency in recent months.

So far in 2014, DHS has reportedly amassed a huge reserve of long-range artillery shells.

Why does the DHS need artillery shells?

Some estimates place the total stockpile of ammunition at more than 2.5 Billion rounds, a large percentage of which consists of devastating hollow-point bullets.

The Bundy Ranch standoff revealed the propensity of at least one federal agency to bear arms against American citizens.

Bureau of Land Management officers engaged in a standoff with the Cliven Bundy, using force against several members of his family, in their effort to collect a debt.

It was obvious from that incident that the DHS is not the only agency with military weapons, ammunition, and agents and officers ready and willing to fire upon American citizens.

Yes, Nazi Germany would be proud of those Feds who would follow orders and assault our citizens just as they did back in the 1930s on a consistent basis. After all, the Obama administration understands the use of fear to get things done.

Of course the Bundy situation also motivated hundreds of passionate patriots to respond in kind, resulting in the agents’ retreat – at least temporarily.

Facing an entity with billions of rounds of ammunition, and Agents willing to follow orders and attack civilians would be an entirely different proposition.

While it might ignite a Second Civil War, the nation as we know it will never be the same afterwards.

Documentation proves virtually any of the federal government’s many agencies – including the Department of Education and the U.S. Postal Service – are engaged in collecting ammunition.

While there is no indication these bullets are being amassed for use against U.S. citizens, the sheer number of rounds combined with recent exhibitions of federal force is enough to cause concern among already wary Americans.

Next, let's look at the United States Post Office buying up ammo!

What gives here? The Post Office is supposedly broke and in need of funds, yet it is using parts of its operations budget to buy up ammo?

So how can they do this yet keep asking Congress for more and more money to stop from going broke?
And yes, as if the U.S. Postal Service didn’t already have enough to worry about, now it has opened itself up to scrutiny concerning its stockpiling ammunition as part of a broader Obama Administration plot to deprive Americans of our liberties by making ammo scarce.

On April 14, Newsmax.com reported that the USPS was seeking to buy a large amount of ammunition on the heels of similar purchases by the Social Security Administration, the U.S. Department of Agriculture, and the National Oceanic and Atmospheric Administration.

"The problem is, all these agencies have their own SWAT teams, their own police departments, which is crazy," he said. "Do we really need this? That was something our Founding Fathers did not like and we should all be concerned about."

While no one is disputing that, the question remains unanswered: Why Millions of rounds for training? And if not for training, why does the Post Office need so much ammo?

While Liberals claim their answers are perfectly acceptable explanations, Conservatives are not swallowing the lie.

Conservatives simply won't be persuaded to accept the lie, and instead believe that the Obama administration is using government agencies to amass vast quantities of ammo to keep the American public unarmed.

While some believe the government is building an arsenal for a war against the American people, others believe that this is simply a way of de fato disarming American gun owners.

In essence the Obama administration is saying, "Sure you still have the right to keep and bear arms -- but without ammo!"

Now, let's talk about the Pentagon destroying $1 Billion Worth of ammunition.

On April 28, 2014, it was reported that the Obama Administration’s love of wasteful spending is, perhaps, only equal to their hatred for all things firearm-related.

For the last few years, multiple sites have reported about the federal government’s purchase of millions of rounds of ammunition.

But, while these other agencies are buying up ammo, the Pentagon announced that it now has plans to destroy $1.2 Billion worth of ammunition simply because they do not keep adequate purchase records.

According to a new report from the Government Accountability Office, the Department of Defense does not keep proper inventory records, so because of poor record keeping -- they claim that they cannot ascertain which rounds are viable and which rounds may have degraded since purchase.

“There is a huge opportunity to save millions, if not billions of dollars if the [Pentagon] can make some common-sense improvements to how it manages ammunition. Despite years of effort, the Army, Navy and Air Force still don’t have an efficient process for doing something as basic as sharing excess bullets. This Government Accountability Office (GAO) report clearly shows that our military’s antiquated systems lead to millions of dollars in wasteful ammunition purchases.”

Sounds like sense, and yet it came from a Democrat.

Reports label the waste as being valued at about $1.2 billion, but it could be more. The services have inventory systems for ammunition that cannot share data directly despite working for decades to develop a single database.

Only the Army uses the standard Pentagon format; “the Air Force, Navy and Marine Corps operate with formats that are obsolete.”

The services hold an annual conference to share information about surplus ammunition and swap bullets and other munitions as needed.

Data about ammunition left over after the meeting disappears from the books, resulting in an unknown amount of good bullets headed to the scrap heap.

The Army, although required by regulation, had not reported annually on its missile stockpile until last month, shortly before the GAO study was to be released.

The report illustrates the obsolete nature of the Pentagon’s inventory systems for ammunition.

A request for ammunition from the Marine Corps, for example, is e-mailed to the Army.

Believe it or not, then the e-mail is printed out and manually retyped into the Army system because the services cannot share data directly.

No kidding! Not only is this time consuming, but it can introduce errors — by an incorrect keystroke.

The result of this destruction of ammunition not only signifies the presence of an absurd, redundant bureaucracy, but might also signify a concerted effort by the government to drive up the price of ammunition by making it scarcer.

Just days ago, the U.S. Postal Service announced that they are looking for distributors to sell them assorted small arms ammunition.

They have full authority to be armed. Standard issue is the .357 Sig 125 grain bonded jacked hollow point pistol ammunition. These agents investigate allegations of Social Security fraud and respond to threats against Social Security offices, employees and customers.

While they cannot stop sending SSI checks to dead people or other unworthy recipients, we can all feel safer since each one of their agents now has almost 600 rounds of his or her very own.

This month alone, the Department of Homeland Security requested another 450 Million small-arms rounds and now 25 Million shotgun rounds. And honestly, who knows why they feel they need to have as much ammo as the US Army, Navy and Marine Corps combined?

Not to be outdone, the FBI recently requested 100 million rounds. Yup, One Hundred Million rounds!

And really, why so much ammo with violent crimes at a 35 year low? I know "training".

And yes, believe it or not, the National Oceanic and Atmospheric Administration got in on the action and requested 46,000 rounds. Really? Why does a weather service need ammunition? the reasons remains unclear.

Republican Rep. Jason Chaffetz , recently noted that the DHS is purchasing enough ammunition to allow for each person to use roughly 1,000 more rounds of ammo per person than the U.S. Army.

"It is entirely … inexplicable why the Department of Homeland Security needs so much ammunition," said Chaffetz.

According to a new survey conducted by Rasmussen Reports on April 15th and 16th, almost 40% of likely U.S. voters now fear the Federal Government while another almost 20% are not sure if they should or not.

Many believe that this government agency plan is an Obama Administration plan to enact a sort of form of Universal Gun Control on the American public.

The reason that many see this as intentional is that the byproduct of these ammo purchases means that there will be less ammunition on the shelves of stores for the general public.

Less ammunition in the hands of civilians means higher costs for those lucky enough to find ammunition.

And yes, by allowing the out of control spending by the Obama administration within these agencies, remember that they are spending parts of their annual budgets to make these huge ammo purchases, we the taxpayers are essentially funding this artificial ammo shortage created by Obama to screw us.

That's the way I see it!