Uncalled for Criticism of the movie "ALOHA" 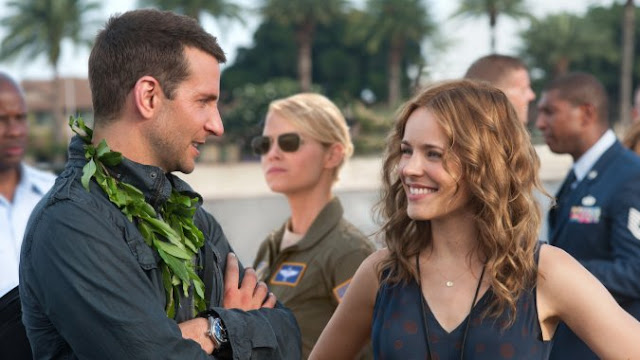 First off, I loved the movie "ALOHA".


So with that, I usually disregard what film critics have to say. And yes, thankfully that is the case with the movie "ALOHA". I say thankfully, because if I had listened to them I would have missed out on a pretty good film.

Many years ago, I learned not to listen to Hollywood film reviewers and other assorted film critics.


It had to do with a movie that Hollywood jumped head over heels over, but frankly was probably the worse movie that I had ever seen up to that point in my life. The movie won an Academy Award or two, but bombed at the box offices here in the states. It did better overseas where crap passes for art all the time.

As for this film, yes it has a story-line that the viewer has to keep up with -- but frankly so do many wonderful classics.

The movie stars Bradley Cooper, Emma Stone, Rachel McAdams, Bill Murray, and others for a very well rounded cast. The only laughable casting choice in the film is Alec Baldwin who plays an Air Force 4 Star General. That is a stretch even for Hollywood!

I give the movies 5 stars for its script and what is done on screen by the cast of great actors. They are wonderful.

Cooper's character is a former Air Force pilot turned celebrated military contractor who returned to Hawaii, the site of his greatest career triumphs. He is there to help jump start a project and for his local political connections.

As soon as he arrives, he re-connects with a long-ago love who has a surprise or two and has been meaning to talk to him. And yes, while there, he reluctantly falls for the hard-charging Air Force fighter pilot who actually volunteered to be his watchdog while he's there.

The movie has also come under fire for featuring Emma Stone’s character as one-quarter Hawaiian because Miss Stone is a blonde haired beauty.

Well, just for the record, I went to High School with such a young woman. Her father was half-Hawaiian and half-Portuguese descent. Her mother was a blonde haired German woman who her dad married while stationed in Germany after World War II.

My blond classmate was stunning by any standard, and she had beautiful blond hair and blue eyes. By birth, yes she was also one quarter-Hawaiian blood. And yes, if I remember right, she was picked on mercilessly by other Hawaiians until she fell in with the wrong crowd. Film Critics report that Miss Stone's character is half-Asian, which of course demonstrates the fact that film's critics don't know the difference between being Hawaiian and Asian. Or they simply missed her saying that she was one quarter-Hawaiian a few times in the film . And yes, she always stated it as a point of pride.

Those critics should go to Hawaii, because anyone there can point out the difference for them.

After seeing the movie tonight, I don't understand the PG-13 rating given to "ALOHA".

Because there was no nudity, swearing, fight scenes, shots fired, car chases,  plane crashes, or an entire state breaking in half and sliding into the ocean like the very silly action-heavy movie "San Andreas," I don't know why "ALOHA" was rated PG-13.

While I do not go to the movies as much as I did many years ago, "ALOHA" was a refreshing romantic comedy with a number of twists. It was not the standard pat script that is pushed out with different actors and backdrops but always the same story.

No, the star met up with his ex-girlfriend but they did not run off together because they were better than that. And no, he did not sell out when it looked as though he would. Yes, he did the right thing and learned from it. Yes, the girl got the guy in the end -- or the guy got the girl in the end. But frankly, there was a lot more going on here. The characters do find themselves, some find closure and redemption, and yes enlightenment takes place, happy endings consume those who deserve it, good guys win, and bad guys lose.

Do I recommend people going to see t his movie because I am from Hawaii and have a special spot for some of the things that were mentioned that I hold close to my heart about Hawaii?

I found it interesting that the character that Bradley Cooper played needed the "mana," the healing power which can exist in places, objects and people, to help right himself.  In the Hawaiian culture, the "mana" is the spiritual energy of the islands for locals -- especially those who have ties to the land. Growing up in Hawaii, I was taught the Hawaiian belief that there is a chance to gain "mana" and lose "mana" in everything we do. An old Hawaiian man once told me that "mana" is also something that we carry with us.

From what I saw in the film, that is exactly what took place with Cooper's troubled character.

Reports to sour folks on going to see this movie range from it being called "pro-military" to "too White" to it being insulting to Native Hawaiians, part Hawaiians, Asians, and locals in general.

And yes, some Hawaiians even disapprove of the use of the word "aloha" for the film. The word "aloha" in the Hawaiian language means hello and goodbye. But "aloha" also means love, affection, peace, compassion, and mercy.

Believe it or not, some of those people actually say that titling it "ALOHA" is a disrespectful misappropriation of their culture and simplifies a word that's rich with meaning. I don't know who came up with that, but it seems a stretch.

Besides, with some tweaking here and there, they could have filmed it in Samoa, or Fiji, Tahiti, Cook Island, or any of a number of places. So instead of being angry at the use of the word "aloha" which is also used in Hawaii on all sorts of products.

Fact is, there is an Aloha Radiator shop, Aloha Plastic Surgery, Aloha Distillers, Aloha Hot Dogs, Aloha Sushi, Aloha Telecom, Aloha Petroleum, Aloha Appliances, Aloha Cleaners, and hundreds of other businesses in the Honolulu area alone. Yes, businesses and products named "Aloha this" and "Aloha that" are all over the place in Hawaii.

And yes, when I was a kid, there was a bar named Aloha Lounge which was just down the street from my grandafter's bar Kolohe Lounge right there in Kaimuki.

For the record, the Hawaii Film Office is a state agency that promotes the industry and administers permits and tax credits. If Hawaiian actors do not want to be in movies, especially one's that at least address some of the Native Hawaiian sovereignty concerns even in a fictional manner, then I would hope that the Hawaii Film Office would stop using taxpayer money to get films and television shows made in Hawaii.

I am sure Hawaii has their fair share of out-of-work Native Hawaiian actors. I would think that like most other occupations there these days, that their high unemployment / high welfare rolls include actors and musicians. While it pays not to work in Hawaii because residents there receive the highest welfare benefits in United States, I would think actors would want to act.

Many of us left our homes in Hawaii having to move to find employment in California and other states on the mainland. Like my father did in the 1970s,  I did the same after going home to Honolulu after getting out of the service. So for there is actually people there angry about using the Hawaiian word "aloha"? Give me a break!

As for those critics who are offended because Hollywood uses Hawaii for its exotic backdrop but goes out of its way to exclude the very people who live there? Allow me to give you some advice, don't depend on others for your livelihood. Write your own scripts, and go make your own movies with a cast purely made up of local talent.

If you truly believe that it is an insult to the diverse culture and fabric of Hawaii to make movies there unless they have a cast made up of all locals? Well then, write your scripts, find the backing, and make your movies.

But beware of what you do, because like a local play or a local band from any state anywhere -- you will probably only appeal to locals there and not a wide audience.

"ALOHA" has landed in sixth place this weekend to bring in $10 million at 2,816 theater locations in the United States.

I really don't know if a bunch of locals making a movie in Fresno, California, or Reno, Nevada, or Austin, Texas, or Baltimore, Maryland, could get people into over 2,800 theaters nationwide to run their film starring unknown actors who might be great in local plays but are not Hollywood material.

I went to see "ALOHA" because Bradley Cooper was in it. For me, he was the movie's draw after I saw his work in "American Sniper" which I loved.

As for the movie "ALOHA" itself, away from the horseshit criticisms, if you want to see a good romantic comedy, a fine flick, one that will make you feel good at the end then go see "ALOHA".

In the last 2 years, I have gone to 3 movies. One was a comedy about parenthood, "American Sniper," and now "ALOHA".

Yes, I can honestly say that I'm turning into a real Bradley Cooper fan. He certainly does a great job in "ALOHA".

And frankly, what is there not to like about Emma Stone and Rachel McAdams. Besides being beautiful women, they are both outstanding in this film.