Bacon Will Kill Us -- And Other Muslim Lies 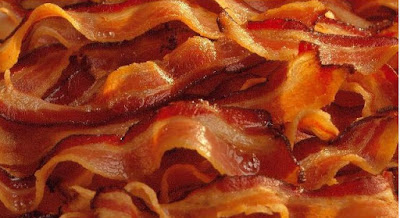 I really believe that the whole "Bacon Will Kill Us" story is just another lie spread by those interested in furthering the Islamitization of America.

Think I'm kidding. While I'm sure you heard recently that bacon is supposed to kill us, I don't know if you heard that the World Health Organization stated that eating pork in general is supposedly as harmful to our health as smoking cigarettes.

Friends, attempting to panic people while fear-mongering is nothing new to political types wanting to control people for their own gain. Socialist and Communist have waged class-warfare as a theme to get what they want for over 100 years. Islam wants Sharia Law and the spread of their idiotic doctrine. One tenant of the Muslim world is that contact with pigs and the eating of pork is banned.

Despite all the lies being spread about pork, bacon isn't going to kill you or me. And we don't need to completely ban it from our diet. Really. And yes, here's what we actually need to know about bacon and cancer.

Our actual risk for getting cancer from bacon, and "processed" meats which include pastrami, salami, hot dogs and some types of sausages made by smoking, curing, salting or adding preservatives, is pretty small.

And just for the record, a recent study found that the overall cancer incidence rates of both vegetarians and the non-vegetarians are low. The incidence of colorectal cancer was higher in vegetarians than in meat eaters.


I find it very misleading, and yes suspicious, that the World Health Organization, would specifically place bacon in the same class of carcinogens as cigarettes. They mislead people simply because the two are not equally dangerous. In fact, the World Health Organization did this knowing that they rank carcinogens based on the amount of available evidence linking a substance to cancer -- and not the amount that the substance actually increases your cancer risk.

That is called manipulating facts to serve an end. In this case, this is an attack on pork producers and the eating of pork to obtain a political goal. And frankly, since there is only one group that benefits from attacking pork, yes, I feel this was done to justify that desires of Muslims and their political agenda. That's just how I see it.

And by the way, chowing down on five strips of bacon every day is the amount that the World Health Organization says raises your colon cancer risk "dramatically." That means if you're the kind of person who has a couple strips of bacon once or twice a week at brunch or in a BLT, your risk for getting colon cancer is a lot lower than what the folks at the World Health Organization says it is.

Of course, as with anything in life, moderation is the key.

Now, the World Health Organization realized they overstepped themselves and immediately backpedaled saying that they they never said that bacon will kill you or that you had to stop eating it.

After the uproar and condemnation of their report, some questioning their political motives, the World Health Organization did in fact try to clarify its message in a statement that said, "The latest review does not ask people to stop eating processed meats but indicates that reducing consumption of these products can reduce the risk of colorectal cancer."

Now, even though the World Health Organization backpedaled and "clarified" their finding to say that as with anything -- moderation is the key, immediately the Obama White House used that report to try to impose a ban on pork from being served in Federal prisons.

In poker, that's called "tipping your hand." And yes, that's what President Obama did when he revealed his pro-Muslim strategy. With a belief that he should use anything to obtain his political agenda, Obama jumped at the chance to please his Muslim constituents by forcing Muslim doctrine on the nation's entire Federal prison population of 206,000 inmates.

Let's be frank here, while even the World Health Organization "clarified" their stance on pork and made sure people understood that they did not say pork was going to kill us or to stop eating it, Obama used this report to try to ban pork in Federal prisons to accommodate growing Muslim population.

Yes, he did it simply to kiss the backsides of Muslims. Yes, the very same reason that he stopped out Air Force from hitting ISIS targets now being hit by Russians who have no fondness for Muslim murderers -- but that's for another article at a later date.

Obama's decision to ban pork from prisons, was welcomed by his Muslim brothers at CAIR. In fact a spokesman for the Council on American-Islamic Relations (CAIR) stated that "In general we welcome the change because it’s facilitating the accommodation of Muslim inmates."

When it comes to spreading the murderous message of Islam, America’s imprisoned are proving to be Jihad’s most fertile ground. Today, out prisons have become breeding grounds for Islamic jihad recruits.

Both State and Federal prison populations present an easy target of opportunity for Islamic radicalization of America. Some studies suggest that as much as 20% of the U.S. prison population is turning to Islam. This is more than 18 times the national representation of Muslims in America, reported to be 0.8 percent. Prisons are churning out converts to Islam who are taught they are righteously entitled to control the religion, speech, and dress of family, co-workers and strangers.

Obama kowtows to Islam everywhere including America's radical Muslim prison population -- even though it is a growing danger to America.

Then within days of his decision, Obama bows to pressure and reverses his prison pork policy. Why?

Well, partly it was because of the uproar over the idea that a single minority group could have so much influence in what is being served on the menu in our prisons, another reason was the political backlash.

On October 1st, Obama did a rapid U-turn on its decision to remove pork products from federal prisons after only one week after its spokesman, Edmond Ross, said pork was the "lowest-rated" food among inmates. Yes, as if their were some sort of survey taken. Imagine that!

Part of the uproar really hit the fan when a few questions were raised from Iowa Republican Senator Chuck Grassley -- who also happens to be the chairman of the Senate Judiciary Committee which oversees the Federal prison system.

The Republican senator wrote to the agency, the Washington Post reported:


"To corroborate the validity of the claim that prisoners indicated a lack of interest in pork products, I am requesting copies of the prisoner surveys and responses that were used to support the determination to no longer serve pork in federal prisons. Please provide any economic evaluations the Bureau of Prisons has relied on that detail the cost of pork as compared to beef, chicken, and non-meat products such as tofu and soy products."

Believe it or not, knowing that the whole pork was the lowest-rated food among inmates was another Obama administration lie to please the Muslim prison population, pork products were back on the menu within hours of the letter's publication the Washington Post.

Besides being exposed as a fraud, the survey was a lie being used as an excuse by the U.S Bureau of Prisons to assist President Obama in obtaining a political goal, Obama's decision to ban pork from prisons did not make our nation's pork producers very happy.

In fact the nation’s pork producers were in an uproar after Obama abruptly removed bacon, pork chops, pork links, ham and all other pig products from the national menu for 206,000 Federal inmates. And yes, the National Pork Producers Council was also skeptical of the decision to ban pork products.

According to the Washington Post, the National Pork Producers Council spokesman Dave Warner said, "I find it hard to believe that a survey would have found a majority of any population saying, 'No thanks, I don't want any bacon,'"

Warner noted that one of the reasons why the Bureau of Prisons decided to ban pork was allegedly because of its higher cost. He said this is false. "Not to throw beef under the bus, but we cost a lot less than beef," he said.

Warner said pork is also nutritious, saying, "A boneless pork chop or loin is a very healthy alternative to lots of other foods. If you compare a pork tenderloin to a rib eye steak and a boneless chicken breast, we come out pretty well."

And while they were elated at first, but obviously disappoint with Obama's reversal, the Council on American-Islamic Relations (CAIR) commended President Obama for "facilitating the accommodation of Muslim inmates,"

So with that, I believe that the initial report by the World Health Organization assisted Obama in his decision to ban pork in prisons all to accommodate his Muslim brothers. Not being able to say they were banning pork to accommodate Muslims, the truth being something the Obama administration avoids at all costs, the administration had their Bureau of Prisons come up with that concocted story about some sort of fictitious prison survey.

Once that lie of the fictitious prison survey was exposed by Republican Senator Chuck Grassley, the ban on pork in Federal prisons was immediately lifted.

Yes, the whole story of how "Bacon Will Kill Us" just demonstrates how Obama will try to use anything he can to justify his efforts to further the Islamitization of America.

And yes, that's just the way I see it.
Tom Correa
Posted by Tom Correa at 3:26 AM