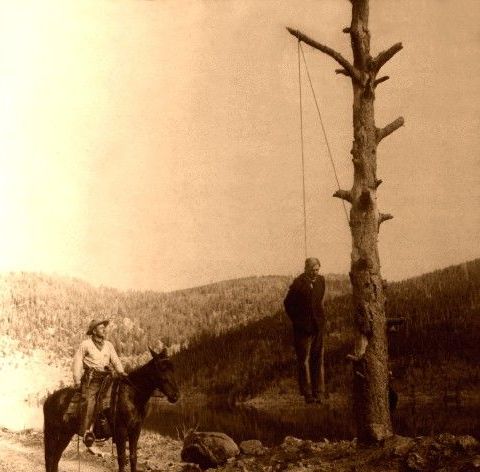 These factors anger and propel citizens to form security and safety committees, vigilance groups, to provide for themselves what their government fails to provide -- both security and safety.  Because of blatant corruption, graft, incompetence, and or political favoritism on the part of law enforcement, prosecutors, and a judiciary. the same citizenry, those which would normally be sworn in legally to preform the duties as members of a Posse, will step outside the law to become member of Vigilante Committees.
The Anti Horse Thief Association (1853)

The Anti Horse Thief Association was a vigilance committee, organized at Fort Scott, Kansas, in 1853. While it initially focused solely on horse theft, the group also provided protection against marauders and other criminal types during the tensions of pre-Civil War Kansas and Missouri.

Founded by Major David McKee, the Anti-Horse Thief Association is said to have been one of the best organized citizens groups in the Mid-West at the time. And yes, for a vigilante group which started out small, but the turn of the century that group could lay claim to about 8,000 members.

And no, they didn't stop there. Fact is, group kept growing and was able to merge with other large groups in Missouri and Arkansas. Yes, so much so that by 1916 their membership grew to over 50,000 members across the four-state region of Kansas, Missouri, Oklahoma and Arkansas. So yes, as far as Vigilante Committees go -- this may have been the largest in America.

The AHTA had it's own newspaper that it used to get it's messages and warnings out, as well as being used for recruiting purposes. Its weekly Editor was W.W. Graves from St. Paul, Kansas. Graves was a well-organized businessman and he employed his skills in helping produce training booklets, pocket manuals and local constitutions for "chapters" across several states.

There are accounts of these volunteers assisting local lawmen and Brinks in apprehension of criminals, assisting in arrests, apprehending escaped convicts, and supplementing law enforcement throughout the many parts of the Mid-West.

It is said that during their earlier days, jurisdictions were not a problem. The Anti Horse Thief Association was a group the was extremely successful in that it was a citizens committee that also assisted law enforcement while "working for themselves."

In the years immediately following the Civil War, horse and cattle thieves plagued central Kansas. By 1870, the residents of Butler, Cowley and Sedgwick counties suffered the loss of more than three hundred horses.

Local reports claimed that "in hardly any instance was a horse recovered, and no horse thief has been successfully prosecuted in any court of justice." And yes, that truly reflected popular sentiment in the region at the time and thus gave rise to the Butler County Kansas Vigilantes.

In the fall of 1870, nearly 800 residents in the Butler County area formed a vigilance committee to address widespread livestock theft. By mid-December, they had hanged eight men -- some say they were innocent while others say they were indeed guilty.

The county sheriff issued warrants for the arrest of 89 of the vigilantes, but that didn't stop that vigilante group. The group only stopped when the government and an attorney representing the vigilantes negotiated a resolution.

As with most all Vigilante Committees in the United States in the 1800s, the Butler County Kansas Vigilantes never wavered in their conviction that the incompetence and failure to act by law enforcement officers and corruption in the courts and the justice system made it necessary for them to rise to the occasion and do what the law wouldn't do regarding those who stole horses and livestock, murdered and committed arson, and threatened their lives and property.

The Dodge City Vigilantes was a citizens committee that was established in 1872 in Dodge City, Kansas, when that town is said to have been overrun with cowboys, buffalo hunters, railroad men, soldiers, transients, card sharks, desperadoes, and highwaymen.

In the first year of existence, Dodge City saw an estimated 15 men killed. Yes, like most of the West, Dodge City was violent for the times -- but not very violent by today's standards.

By early 1873, the local businessmen were concerned about the violence in the town that was not yet organized with city officials or lawmen. They soon hired gunfighter named Billy Brooks as a private lawman. However, when Brooks did not tame the lawlessness of the city, men began to take matters into their own hands by forming the Dodge City Vigilante Committee.

The committee effectively rid the town of some of the worst offenders by notifying six of the leading desperadoes that they must leave Dodge immediately.

Four went, but two were defiant and remained. When the specified hour had passed, twelve double-barreled shotguns were loaded with buckshot, the men were hunted down, and then killed.

On March 13th, 1873, Tom Sherman, who ran a dancehall, chased a man out of his saloon and shot him. As the man lay dying and writhing in pain, Sherman is reported to have walked over to him and said, "I'd better shoot him again, hadn't I boys?"

He then aimed his gun at the dying man's head and pulled the trigger at point blank range.

On June 3rd, 1873, the violence escalated to the point that two vigilante members killed a man named William Taylor. Taylor was employed by Colonel Richard Dodge, the commanding officer of Fort Dodge.

Col. Dodge is said to have been so angry that he immediately telegraphed the Kansas Governor and gained special permission to arrest the guilty parties. His troops entered Dodge City the next day and arrested Bill Hicks who was later convicted. On June 5th, the soldiers arrested five more of the worst vigilantes -- including Tom Sherman.

One of their first acts was to track down a horse-thief who had stolen a team of horses and was finally captured in Nebraska. Three years later, the group, unable to continue to bear the expense of tracking down outlaws, reorganized, and became "The Atchinson County Protective Association" in the spring of 1889. With a number of influential members including bankers and county officials, the group grew to some 1,500 members.

This list of the Vigilante Groups operating in Kansas was compiled from various sources.