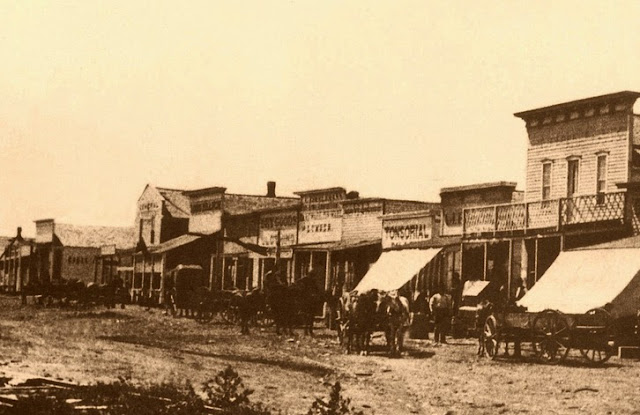 Ever wonder about what it took to be a police officer in Dodge City by 1882? Ever wonder if there were requirements for the job? Yes, requirements that many before 1882 could never have met.

While it wasn't the case for most small Western towns like Dodge City, by the 1880s most major American cities had municipal police departments in place. And yes, big city police officers were full-time employees and not simply community volunteers or case-by-case fee retainers as was the case in smaller towns.

Most departments had permanent and fixed rules and procedures. Many had employment requirements for police officers. This was all to make police officers more accountable to the public.

And while that is true, for a very long time merchants paid for police to shake door knobs to ensure businesses were secure after closing. Many also required reports of vandalism be submitted to them and not their departments. Yes, the start of modern police work sounds a lot like what takes place when businesses hire private security guards to patrol their businesses today.

Because funds for police departments were now part of a city budget, funds were not as readily available as they were when merchants paid. Subsequently, cities had cuts in pay and were not able to afford the most qualified people.

As a result many cities experienced problems with poorly trained officers, police corruption, and graft. And while that was going on with police departments in American cities, Americans saw a marked rise in political corruption and graft among city officials who catered to special interests and looked the other way as law breakers paid off the police and made financial campaign contributions to crooked politicians. Yes, it was a lot like what we see going on today.

It was an era ripe with graft and corruption. Mark Twain termed it "The Gilded Age." And yes, it was very corrupt in so many ways. In fact so mush so, that many today are comparing the Gilded Age to what is going on with the political corruption that we all see so often in the newspapers today.

Like today, in the big cities of the 1800s, politics influenced how police conducted themselves. It all depended on the political agenda of who was in office and their political ambitions.

Because of the desire to separate themselves from political minded city officials, policing evolved into the police organizations that we have today. And yes, private security and detective organizations like the Pinkerton and Burns Detective Agency would become the models for investigative police work of the future.

Remember, this was going on in the big cities like Chicago, Boston, New York, and St Louis in the East, and San Francisco in the West. In the smaller Western towns lawlessness was addressed by citizen groups known as vigilantes long before organized law enforcement was established to combat crime.

As these town's grew, it wasn't very long before it became clear that the locally maintained system of volunteer constables and watchmen was ineffective in both detecting and preventing crime. And frankly, the use of vigilantes was only in the extreme for the most part.

Below is one example of a town coming to grips with the future by simply putting forth requirement for their police officers. That town was none other than Dodge City. Dodge City was tired of part-time police officers spending more time in gambling halls and working as full time pimps and bouncers for whorehouses.

On June 10th, 1882, P. W. Beamer was named to head the Dodge City police force. And yes, on June 13th, 1882, The Ford County Globe, reported his appointment along with a list of requirements that the city actually required from their police officers.

The article below gives us insight into the evolution of law enforcement in the Old West. It tells the public exactly what was required from police officers in Dodge City in 1882.

We congratulate our city officials in their wise and judicious selection of police officers last Saturday.

P. W. Beamer, as city marshal, is a good selection --- in fact one of the best that could be made at this time. Mr. Beamer is one of our best citizens --- an earnest, unassuming citizen --- temperate in his habits, and a person especially suited for the place. Lee Harland and Clark Chipman, as policemen, are both nervy fellows and are, if we do not misjudge them, the proper men for the positions named.

The mayor has adopted a set of rules for the especial guidance and observance of the police force, which, if carried out, will be an additional incentive to have officers perform their duties. He insists that these rules must be observed or he will speedily remove any officer that violates them.

The rules which Mayor A. B. Webster attempted to have instilled were printed in the Dodge City Times, June 22, 1882:

- 1. Each and every member of the Police force shall devote his whole time and attention to the business of the department, and is hereby prohibited from following any other calling. They must at all times be prepared to act immediately on notice that their services are required.

- 2. Punctual attendance and conformity to the rule of the department will be strictly enforced.

- 3. Each and every member must be civil, quiet and orderly; he must maintain decorum, command of temper and discretion.

- 4. They must not compound any offense committed or withdraw any complaint unless authorized by the Mayor.

- 5. All officers on duty must wear the star or shield on the outside garment on the left breast.

- 6. No member of the police force while on duty shall drink any intoxicating liquor or allow any to be introduced into the city jail.

- 7. No member shall leave the city or be absent from duty without permission from the mayor.

- 8. They must not render assistance in civil cases except to prevent an immediate breach of the peace, or quell a disturbance.

- 9. Every member will be furnished with a copy of these regulations and is expected to familiarize himself with the same and also with the city ordinances.

10. The members of the police force will as soon as practicable after making an arrest report the same to the City Attorney and execute, under his directions, the proper papers, and promptly attend the police court at the hour set for trial of causes.

11. Every officer will be held responsible for the proper discharge of his duties; following the advice of others will be no excuse, unless he be a superior officer.

12. The City Attorney will furnish information on legal matters on any officer's request, and will be responsible to the Mayor and Council for their correctness.

13. The presence of any infectious disease must be promptly reported to the Mayor.

14. A memorandum of all property taken from prisoners by the marshal or police, must be handed to the City Attorney, to be by him filed with a note of final disposition in the police court.

It should be noted that some lawmen in the Old West in 1882 would not have qualified for a position on the Dodge City Police Department using these standards.

And while this was a great attempt at standardizing conduct, rules such as these really did not take full effect until later. The problem was that many lawmen at the time were gamblers and pimps first, and lawmen second. While many were truly heroes, sadly there were those who saw a badge as a license to steal.