As you know, I love old newspapers. Minus the editorial comments that are in news stories, and they are great resources when trying to find out what took place during an incident or event in history. Of course, the comments do provide use with something that some might find interesting.

In this newspaper story, you'll see what I was talking about when it comes to, for example, how people at the time looked at dueling or how they saw "Gamblers, as a class, are desperate men."

And yes, after reading the full account of what took place, I agree with whoever it was that said, "the Loving vs Richardson gunfight demonstrates what deplorable marksmen many of the gunslingers sometimes were."

It's true. If you ever wondered if people shot at each other at almost point blank range in saloons and never got hit, then let's talk about the Long Branch Saloon Gunfight in 1879.


FRANK LOVING AND LEVI RICHARDSON FIGHT WITH PISTOLS. LOVING COMES OUT WITH A SCRATCH AND RICHARDSON GOES TO HIS GRAVE

There is seldom witnessed in any civilized town or country such a scene as transpired at the Long Branch saloon, in this city, last Saturday evening, resulting in the killing of Levi Richardson, a well known freighter, of this city, by a gambler named Frank Loving.

For several months Loving has been living with a woman toward whom Richardson seems to have cherished tender feelings, and on one or two occasions previous to this which resulted so fatally, they have quarreled and even come to blows.

Richardson was a man who had lived for several years on the frontier, and though well liked in many respects, he had cultivated habits of bold and daring, which are always likely to get a man into trouble. Such a disposition as he possessed might be termed bravery by many, and indeed we believe he was the reverse of a coward. He was a hard working, industrious man, but young and strong and reckless.

Loving is a man of whom we know but very little. He is a gambler by profession; not much of a rowdy, but more of the cool and desperate order, when he has a killing on hand. He is about 25 years old.

Both, or either of these men, we believe, might have avoided this shooting if either had possessed a desire to do so. But both being willing to risk their lives, each with confidence in himself, they fought because they wanted to fight.

As stated in the evidence below, they met, one said "I don't believe you will fight."

The other answered "try me and see" and immediately both drew murderous revolvers and at it they went, in a room filled with people, the leaden missives flying in all directions.

Neither exhibited any sign of a desire to escape the other, and there is no telling how long the fight might have lasted had not Richardson been pierced with bullets and Loving's pistol left without a cartridge. Richardson was shot in the breast, through the side and through the right arm. It seems strange that Loving was not hit, except a slight scratch on the hand, as the two men were so close together that their pistols almost touched each other.

Eleven shots were fired, six by Loving and five by Richardson. Richardson only lived a few moments after the shooting. Loving was placed in jail to await the verdict of the coroner's jury, which was "self defense," and he was released.

Richardson has no relatives in this vicinity. He was from Wisconsin. About twenty-eight years old. Together with all the better class of our community we greatly regret this terrible affair. We do not believe it is a proper way to settle difficulties, and we are positive it is not according to any law, human or divine.

But if men must continue to persist in settling their disputes with fire arms we would be in favor of the dueling system, which would not necessarily endanger the lives of those who might be passing up or down the street attending to their own business.

We do not know that there is cause to censure the police, unless it be to urge upon them the necessity of strictly enforcing the ordinance preventing the carrying of concealed weapons. Neither of these men had a right to carry such weapons.

Gamblers, as a class, are desperate men. They consider it necessary in their business that they keep up their fighting reputation, and never take a bluff. On no account should they be allowed to carry deadly weapons.

The Ford County Globe also reported the testimonies of individuals who had eye-witness knowledge of the shooting.

Here we can see for ourselves what Adam Jackson who was the bartender at the Long Branch, Dodge City Marshal Charles Bassett who immediately responded to the shooting, and Deputy Sheriff William Duffey who was present, all had to say regarding what took place.

Adam Jackson, bar-tender at the Long Branch, testified as follows:

"I was in the Long Branch saloon about 8 or 9 o'clock Saturday evening. I know Levi Richardson. He was in the saloon just before the fuss, standing by the stove. He started to go out and went as far as the door when Loving came in at the door.

Richardson turned and followed back into the house. Loving sat down on the hazard table. Richardson came and sat near him on the same table. Then Loving immediately got up, making some remark to Richardson, could not understand what it was.

Richardson was sitting on the table at the time, and Loving standing up. Loving says to Richardson, 'If you have anything to say about me why don't you come and say it to my face like a gentleman, and not to my back, you dam son of a bitch!'

Richard- son then stood up and said, 'You wouldn't fight anything, you dam' could not hear the rest.

Loving said, 'you try me and see!'

"When I first heard the firing I was at Beatty & Kelley's saloon. Ran up to the Long Branch as fast as I could. Saw Frank Loving, Levi Richardson and Duffey. Richardson was dodging and running around the billiard table. Loving was also running and dodging around the table.

I got as far as the stove when the shooting had about ended. I caught Loving's pistol. Think there was two shots fired after I got into the room, am positive there was one. Loving fired that shot, to the best of my knowledge.

Did not see Richardson fire any shot, and did not see him have a pistol. I examined the pistol which was shown me as the one Richardson had. It contained five empty shells. Richardson fell while I was there.

Do not know whether Loving knew that Richardson's pistol had been taken away from him. There was considerable smoke in the room. Loving's pistol was a Remington, No. 44 and was empty after the shooting.

"I was at the Long Branch saloon. I know Levi Richardson, who is now dead. I know 'cock-eyed Frank' (Loving). Both were there at the time. I heard no words pass between them. They had fired several shots when Frank fell by the table by the stove. I supposed that he was shot.

I then had a scuffle with Richardson, to get his pistol, and threw him back on some chairs. Succeeded in getting his pistol. There might have been a shot fired by one or the other while we were scuffling.

Cannot say whether Richardson had been shot previous to that time, but think he had, as he was weak and I handled him easily. Richardson then got up and went toward the billiard table and fell.

I can't swear whether any shots were fired at Richardson by Loving after Richardson was disarmed. Don't think Loving knew I had taken the pistol from Richardson. It was but a few seconds after I took Richardson's pistol that he fell."

As for me, I find it interesting how each witness saw the same scene a little differently. Of course the other very interesting part of this shootout is that no one else in the saloon was injured.

Frank Loving was arrested per standard procedure, And after a coroners inquest ruled the shooting self defense, Loving was released without charges.

The Ford County Globe later reported, "It seemed strange that Loving was not hit, except for a slight scratch on the hand, as the two men were so close together that their pistols almost touched each other."

And friends, there are a couple of perplexing things that we find time and time again in many of the gunfights that took place in the Old West. One thing is that shootings that take place around card tables in saloons in most instances were usually reported "as being so close together that their pistols almost touched each other." The other thing that's always a little baffling is that in many instances the so-called gunfighters involved are such bad shots that they would miss one another almost entirely -- if not entirely.

And not to change the subject here, but no, it's certainly not like the movies. But then again, when was the last time anything real came out of Hollywood. After all that's their stock and trade. They deal in the fake, the illusion, the smoke and mirrors. 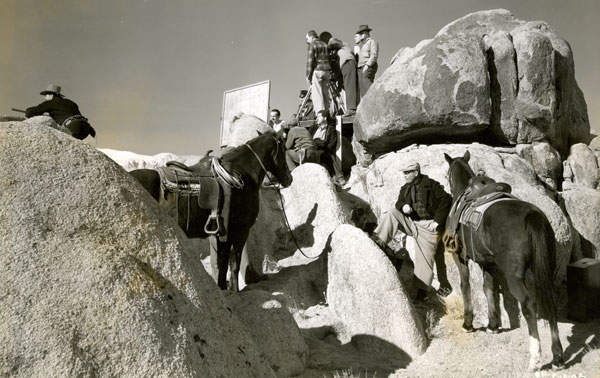