Lester Moore -- No Les No More

Boothill Graveyard in Tombstone, Arizona, is the final resting place for over a couple of hundred people. They include gunmen, outlaws, lawmen, gamblers, cowboys, a man wrongly hanged, blacksmiths, soiled doves, miners, business men and women, housewives, children, and those only known to God "who died with their boots on."

Those buried there includes Marshal Fred White who was 31 years old when he was accidentally shot and killed by Curly Bill Brocius on October 30th, 1880. The reason I say "accidentally" is because that's what Marshal White said before he died.

Tom McLaury, Frank McLaury, and Billy Clanton are there. We all know they were killed in the shootout near the O.K. Corral on October 26th, 1881.

Then there's the story of how William Kinsman ended up in Boothill. The story goes that someone put a notice in the Tombstone Epitaph that William Kinsman intended to marry May Woodman. Since they were already living together, this made Kinsman angry. His anger obviously overrode his better judgement and he made the big mistake of running his own ad in the Epitaph stating that he had no intentions of ever marrying May Woodman.

On February 23rd,1883, William Kinsman was standing in front of the Oriental Saloon on Allen Street when May Woodman walked up and shot him dead. And yes, this goes to the heart of not publicly embarrassing a woman.  After all, it's one thing to be talked about in whispers and a whole nother thing to be made a fool of in the local newspaper.

Woodman was sentenced to five years in Yuma Territorial Prison for killing Kinsman. The acting governor pardoned her after she had served less than one year. And while Kinsman is in Boothill, there's no telling whatever happened to May Woodman.

Jack Dunlop, the bandit known as "Three Fingered Jack," died of gunshot wounds on February 24th, 1900, after an attempted holdup. And yes, he's there.


George Johnson's marker can be found there. It states "Here lies George Johnson, hanged by mistake 1882. He was right we were wrong. But we strung him up and now he's gone." Of course the only problem with his marker is that no one can verify that a man named George Johnson was lynched in Arizona in 1882.

As for John Heath, he was accused of organizing the robbery that led to the 1883 Bisbee massacre. He has a grave marker near the grave of the five perpetrators of the massacre. Heath was arrested and convicted, and was later removed from the Tombstone jail by an angry group of 50 citizens.

Those citizens lynched Heath on February 22nd, 1884, from a telegraph pole on Second Street. And though there is a grave marker there for him, he was not buried in Boothill Cemetery. In fact, John Heath's body was returned to his wife in Terrell, Texas, and buried in the Oakland Cemetery there.

One marker that is there simply reads, "DUTCH ANNIE 1883." It is an epitaph too short for someone known by the broke and desperate as a true friend. She is said to have grub-staked many. She is also said to have gone to her eternal rest with more than 1,000 people following her coffin. All paying tribute to "Dutch Annie – Queen of the Red Light District."

Lester Moore has become forever known for the epitaph inscribed on his headstone. It reads,
Here Lies
Lester Moore
Four Slugs
From a .44
No Les
No More

When was he born? No one knows. As for his death? It's said to be 1880, but no month or day is known. Then again, it could be a year other than 1880. Supposedly there was a Lester Moore who was a Wells Fargo Station Agent in the Mexico-United States border town of Naco, Arizona. in the early 1880s. As the station agent, Moore was responsible for delivering items shipped. Yes, he worked the window and dealt with all sorts of customers.

It's said that Hank Dunstan arrived at the Wells Fargo station to pick up a package he was expecting. Dunstan was surprised to see that the package was badly handled and was actually a shambles when Moore handed it to him. And as expected, Dunstan wasn't happy with the condition of his delivery and soon became angry over the poor condition of the battered package.

Dunstan voiced his complaint to Moore, and soon enough they were arguing. Their argument quickly escalated to where both men reached for their guns. And yes, soon shots were fired.

The rest of the story goes that Hank Dunstan shot Lester Moore four times with his .44 caliber revolver. Moore didn't go down without a fight since it's said that he managed to fire at least one shot. It hit Dunstan in the ribs. So when the smoke cleared, Lester Moore lay dead behind his window and Hank Dunstan lay mortally wounded. All in all both men ended up dead.

Lester Moore's body was transported to the town of Tombstone, where he was buried in the Boothill Graveyard. As for Hank Dunstan, no one knows where he is buried. That's the tale of Lester Moore as repeated for years. But frankly, there may be more to this story.

So was Lester Moore really Lewis Moore who lived in Tombstone, and was he born in Illinois in 1828?  Or, could there really have been a Lester Moore that arrived before the 1880 Census? Since it's only speculation that Moore was killed in 1880, could a Moore have been killed earlier during that time period?

Since Cochise County wasn't founded until 1881, and subsequently their records only start that year, could there have been a Lester Moore that arrived before the 1880 Census and was killed there? If so, than why is it that it's said there was never anyone named Lester Moore who was killed in Arizona Territory? As for a Lewis Moore being killed, who knows?

Of course, what if it's simply a case of a grave marker being wrong? Was it changed at some point because it became too weathered to read? As I said, who really knows? Fact is, we don't have answers to this mystery as well as for the names of all of the unknown buried in Boothill. Yes, the same as how we also don't know who penned Lester Moore's famous epitaph. No one knows if it was the local undertaker, or just someone else good with words.

Maybe it was someone when the cemetery was being cleaned up in the 1940s? During the 1940s, the Tombstone City Council is said to have sponsored a group to restore and preserve their Boothill. It's said that metal markers were used to replace the old wooden markers that had actually disappeared in many cases.

During that time, it's said that as new markers were put into place, the preservation group actually researched as many of the graves as possible by contacting relatives, friends, older residents, and historical records. I can't him but wonder how they would explain Lester Moore's grave mystery? I can't help but wonder if it's true, that there was no Moore? 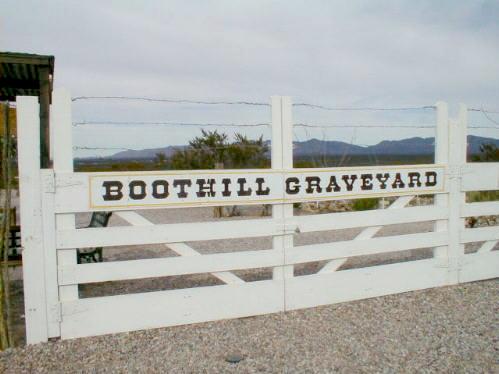