I love the stories that I get from my readers. This is a story about Sheriff John Lighter Frost who simply vanished. Yes, he rode off and was never seen again.

That was in Wallisville, Texas, in November of 1900. It was when Sheriff Frost mounted his gray horse and rode away from the county courthouse in Wallisville on November 10th, 1900. He was headed out to go settle what was called a bitter dispute over property. The property being disputed was a hunting lodge and ranch on Lake Surprise about six miles from Smith Point in the southern part of Chambers County.

The Sheriff was going there to evict a supposedly prominent citizen who managed that hunting preserve. He may have had to evict those there and confiscate that property.

In 1892, Col. W.L. Moody of Galveston purchased a huge hunting lodge at Lake Surprise. The lake had a steady growth of wild celery which drew thousands of canvasback ducks.

Col. Moody employed Capt. William Kennedy and his son Lee, along with R.cbcrt Heiman of Smith Point to operate the lodge. Believe it or not, future Secretary of State William Jennings Bryan, who was also the Democrat Party nominee for President in 1896, 1900, and 1908, as well as many other celebrities from across the country actually hunted ducks at the lodge as guests of Col. Moody.

Then in 1900, Capt. Kennedy sent word back to Col. Moody that the lodge was now his. Imagine the nerve of a caretaker simply saying someone else's property is now theirs. Well, Col. Moody didn't let this lay and tried without success to get rid of the Kennedys. Finally, he obtained an eviction order.

Sheriff Frost rode from Anahuac to the lodge alone on November 9th, 1900. The story is that he made a visit to the hunting lodge that afternoon, but Mrs. Kennedy told him that she was too sick to move and her husband was gone. Sheriff Frost returned the following day on the 10th and was never seen again.

John Lighter Frost was the son of Samuel C. and Nancy Frost. He was born on January 14, 1862, in Jessamine County, Kentucky. The Frost family first moved to Texas from Kentucky in 1862 where his family settled in Denton County. In 1878, the Frost family moved to Chambers County to settle near Fort Anahuac. After the death of his father in 1879, John Lighter Frost worked the family farm and supported his widowed mother.

John Lighter Frost was a bachelor living in an Anahauc hotel when he begun his third term as Sheriff and made that fateful ride. And now, the 38-year-old lawman was missing, vanished, gone with only a few clues to go by while trying to figure out what happened to him.

After the sheriff went missing, Wallisville's citizens gathered together to start a search. Harris County Sheriff Archie Anderson and Galveston County Sheriff Henry Thomas lead more than 100 volunteers on foot, in boats, and on horseback in search of the body of Sheriff Frost. And yes, Texas Governor Joseph Sayers offered a $300 reward, while the citizens and lawmen of Chambers and Galveston counties raised another $600 in reward money for the capture of Frost's killers.

Witnesses soon came forward to testify that they saw the Sheriff with the Kennedys until about 6:15pm on November 10th before riding away from the hunting lodge. Some speculated that the Sheriff was off to get help to evict William Kennedy who had refused to leave. Neighbors reported that they soon heard gunshots shortly after the Sheriff left the lodge.

Soon the search concentrated near the lodge, and soon they found his horse and then his hat. It was actually two days after starting the search that his horse was found grazing not far from the lodge. His saddle was blood stained, the bridle reins had been cut, the slicker that the Sheriff always carried on the back of his saddle was missing.

It is believed the Sheriff was shot and killed while attempting to serve eviction papers on Capt. William Kennedy who was seen at the time as a prominent citizen. Murder was not very common in that county, so it was really hard to accept the notion that the Sheriff rode out to evict Capt. William Kennedy, his son Lee Kennedy and Robert Heiman, all of Smith Point, from a hunting lodge owned by Col. W.L. Moody of Galveston, and then was killed by those he was evicting.

The three were arrested aboard Heiman's blood-stained boat at Galveston wharf on November 11th, 1900. Although the men were charged with murder, they never stood trial for the crime. Yes, William Kennedy, his son Lee Kennedy, and Robert Heiman, were arrested and charged with his murder. But of course, because no positive identification of the body could be made, the case against the three was dismissed in 1902.

Most believe the three ambushed Sheriff Frost. And supposedly, Robert Heiman confessed they shot him in the back, chopped him up, and then fed him to alligators. But then again, Heiman who was 18 years old at the time, gave at least seven different confessions. In fact, Robert Heiman made a series of confessions, at one time saying the body had been buried in an old grave. Another story he told was that the body was thrown into the waters of East Bay. that Frost was dismembered before being cast into Galveston Bay.

Being afraid of a being lynched in Chambers County, the three were kept in Galveston. Then on a change of venue in September 1901, the trial was moved to the Montgomery County Courthouse in Conroe. Of course, Heiman repudiated all confessions upon arriving in Conroe. And because the body of Sheriff Frost was never found, and there was no confession, the district attorney filed a motion on January 14th, 1902. to dismiss the case. And soon after the trial, the Kennedys and Heiman left Chambers County. They were never to be heard from again.

The charges against the three were dismissed because there wasn't enough evidence to hold them for a trial. Fact is Sheriff Frost's body was never found.

That's not to say people didn't find a body closely matching his description. In fact there in the mud near where his hat was found near the lodge, searchers found an already decomposed body believed to be him buried there in the mud. The body they found could never be positively identified as that of the Sheriff.

Then in April 1901, authorities found a skeleton that they initially thought was the murdered Sheriff. But soon a local doctor ruled that an autopsy showed the skeleton was not him, and instead was one of the nameless victims who were killed by the hurricane that wiped out most of Galveston in 1900. 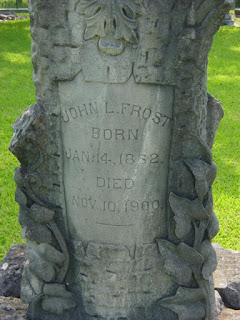 The 6-foot marker is carved to resemble a tree trunk with a lily at its base. It has a simple inscription noting Frost's birthday, January 4th, 1862, and the day he disappeared which was November 10th, 1900.

From the different sources that I was sent, or that I can find, it is fairly obvious that many there at the time believed that Sheriff John Frost was shot and killed while attempting to serve eviction papers on the Kennedys. And while I don't know what happened to the Kennedys and Heiman after they left Chambers County, I can only hope they met the wrath of God when it was their time to be judged.