The Lynching Of The Ruggles Brothers 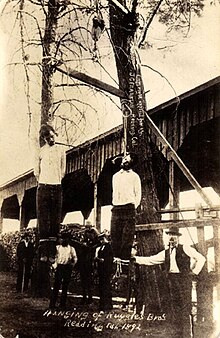 I love email and letters from my readers. One reader recently wrote to ask if people were actually hanged for things other than murder in the Old West? Of course my first thought was of Jake Slade who was hanged simply because he was a bad hombre when drunk.

As I wrote in Jack Slade -- Hanged For Being Too Mean, as with many of the exaggerated claims of people such as Billy The Kid, Wyatt Earp, Doc Holliday, and Wild Bill, Slade's record as a vicious killer of up to 26 victims is pure exaggeration. Believe it or not, only one killing, that of Andrew Ferrin, is really verifiable fact.

But as for his reputation as someone who you wanted to stay on his good side because of his horrible temper, that was something that is said to be true. And yes, his anger was only increased when combined with drinking too much. His legendary temper and his boozing were his downfall.

Both issues lead to his being fired by the Central Overland in November 1862. And then, on March 10, 1864, during a drunken spree he let his demons get the best of him in Virginia City, Montana. It was then that he was in fact lynched by local Vigilantes. They did in fact hang him for "disturbing the peace" on March 10th, 1864.

As for hanging folks who robbed a stage or a train, or a bank, an example of hanging stage robbers is the lynching of the Ruggles brothers on July 24th, 1892, in Redding, California.

Like Charles Boles, alias Black Bart, John and Charles Ruggles must have thought that they could get a hold of some easy money by robbing stagecoaches. On May 10th, 1892, the brothers robbed a stage out of Weaverville, California. But because their first robbery was a failure of sorts simply because they didn't get much from it, they decided to rob another stage that they believed was carrying a fat payroll. small.

The brothers decided to stop a stage just as a it was slowly going up the top of a hill about five miles north of Redding. Like Black Bart, the brothers figured the stage would be moving slowly and the horses would be played out from pulling the stage uphill.

So with that being their plan, the brothers stopped a stage on May 12th, 1892. But unlike Black Bart who was only shot at twice in the supposed 28 stage robberies that he did, Charles Ruggles was hit with buckshot fired by a messenger guard riding inside the coach. Soon more shots were exchanged and in the battle driver Johnny Boyce, messenger guard Amos "Buck" Montgomery, and a passenger by the name of George Suhr were all wounded.

Some accounts say that John Ruggles ran up to the wounded Amos "Buck" Montgomery and shot him in the back. John killed Montgomery just before stage driver Johnny Boyce took off out of there as fast as the horses could run. It is also said that John thought Charles was mortally wounded. So he said his goodbyes to his brother Charles and grabbed the money before fleeing.

After Boyce notified the law in Redding, a posse was formed and ran out to the spot of the robbery/ There they found Charles Ruggles right where he was shot. They immediately took him into custody, and soon he recovered from his wounds while in the Redding jail.

It is said that during his questioning, Charles told Wells Fargo Detective John Thacker that his brother John Ruggles was the other robber. Right there and then, Wells Fargo placed a reward of $1,100 on the capture and conviction of John Ruggles.

Some say that John Ruggles was hanged because he killed Amos "Buck" Montgomery. Some also say that it didn't matter that his brother Charles didn't kill anyone and that just robbing the stage was enough to hang him. Either way, it was enough for the citizens to take action and no one was ever prosecuted for the lynching the two.

It's also said that the hanging of the Ruggles brothers discouraged others from robbing stages for a long time. Yes indeed, the whole idea that stage robbers would be hanged is said to have made riding the stage pretty safe in Shasta County for years after that.

Seeing how getting hanged for robbing a stage would deter others from trying the same thing, I'd say it's a safe bet to say it did.