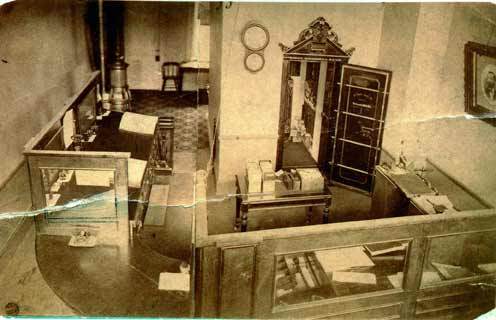 Outlaw gangs deserve no sympathy from anyone. They lived outside the law and didn't give a damn about robbing and stealing, killing and butchering. They killed the innocent, the unarmed, just as fast as they would folks armed and defending themselves or their family. So make no mistake about it, while there is a sort of admiration for outlaws going around these days, there was nothing about them to admire.

That lessen was driven home on September 7th, 1876, for the hard-working good people living in the small town of Northfield, Minnesota. It was a day that showed those there that there was nothing "romantic" about a killer taking the life of an innocent bank employee, about men trying to steal everything you and your family worked and saved for, about robbers who were no different than blood sucking ticks.

The James-Younger gang found itself surrounded by angry townsfolk and was nearly wiped out on that day in 1876 after attempting to rob the First National Bank there. They were a horrid group of killers who had certainly killed in cold blood. They saw others as weak and scared and easy prey.

Of course, the good people of Northfield, Minnesota, taught them differently by shooting them all to Hell! And it's true. They had no idea that they were about to reap the storm of an angry populace aimed at keeping what's theirs and protecting their town.

Little did they know that going to Northfield would end all of their days as outlaws.

On that sunny Thursday afternoon, September 7th, 1876, eight outlaws of the James-Younger gang rode into Northfield to rob the First National Bank. Some say they were there to rob it because of former Union Generals having their funds kept there, but frankly that's all just speculation. What we do know for certain is they hit that bank as a secondary choice. For me, I don't believe it was some sort of calculated move to attack Northfield over Union Generals. If so, then why was it their second choice and not their first? Frankly, I think they ran out their string in Missoui and were looking for a fat bank in an area that didn't know who they were.

Fact is, on September 4th, the gang of outlaws rode into Mankato, Minnesota, to rob the First National Bank of Mankato. That was the gang’s first choice, and whatever made them leave is really unknown as they decided to scratch that idea and instead head for Northfield to rob the bank there.

The James-Younger gang was from Missouri. It's said that after many years of committing local robberies, the gang in fact decided to go North where no one would expect to see them. The James-Younger gang consisted of James brothers Frank and Jesse, and the Younger brothers Cole, Bob, and Jim. Others in their gang included a man by the name of McClelland "Clell" Miller, and Charlie Pitts. As for the eighth gang member, he was thought to have been Bill Chadwell. But, then again, others say that he was in fact a man named Bill Stiles. Since Bill Stiles seems to be commonly accepted as the eighth man, and that's who is believe to have been killed there, I'm going with Bill Stiles.

Most everyone agrees that the Northfield robbery was one which has been called a "Textbook James-Younger Robbery." Most also agree that it went very wrong that day.

It began with when Frank James, Charlie Pitts, and Bob Younger entering the bank at 1:50 pm. Cole Younger and Clell Miller were outside of the bank door. Supposedly they were there to stop townsfolk from entering the bank during the robbery. Of course, this is part of where they made their big mistake. After all, there's nothing like having strangers posted outside a bank just hanging around to draw suspicion.

Of course with guns drawn, inside the outlaws ordered the three bank employees, Joseph Heywood who was an acting-cashier, Alonzo E. Bunker who was a bank teller, and Frank J. Wilcox it's bookkeeper, to open the safe. All refused. Jeseph Heywood being the only one that really could, and they knew that because as a cashier he would have had to have access to available cash.

From his refusal, the story goes that the outlaws ordered Heywood to open the safe again. Heywood again refused. Frank James decided that it was time to get tough and knocked Heywood to the floor with his pistol butt. The whole time the bandits are being told that the safe was locked and that they couldn’t open it.

Of course this goes to prove how dumb these outlaws were. They didn't know  that the safe was not locked. All they had to do was turn the handle and it would have opened. So yes, Heywood told the robbers that there was a chronometer, which was a time lock, on the safe and it could not be opened. He actually lied to save the town's money. The door was closed, but it was actually unlocked at the time of the robbery. As to why the outlaws never tried to open the massive black door to the vault for themselves is a mystery that we'll probably never be solved.

About then one local merchant became suspicious of the two strangers hanging around the bank. Remember, the whole time this has all been going on inside the bank, Clell Miller has been standing outside looking as though he were standing guard. And yes, Cole Younger kept pretending to be tighten his saddle.

So now local merchant J. S. Allen goes to take a look at what's going on in the bank. The 40-year-old Allen was met in the doorway by Clell Miller who grabbed hold of Allen and points his revolver at him. Miller tells Allen to stay quiet or else!

About then, noticing that the outlaws were busy with Heywood and guarding Wilcox, bank teller Alonzo Bunker saw his chance to escape and ran for the back door. Charlie Pitts shoots Bunker in the shoulder as the teller was running as if the Devil were after him. Bunker is said to have not stopped running until he found the town doctor.

Outside the bank is a fierce gun battle. While the three outlaws in the bank were trying to get to that cash, local citizens begin to arm themselves and surround the bank. Then hearing Cole Younger shouting from the street, Bob Younger and Charlie Pitts grabbed what cash could be found on the counter and headed outside.

As for the question as to whether or not Jesse James shot Joseph Heywood in cold-blood or otherwise? Make no mistake about it, Jesse James was in fact a cold-blooded killer. Sources agree that he did kill the innocent and the unarmed without any compunction. As for shooting Heywood? One source said that Jessie James entered the bank during the chaos in the street and that he was the last one out of the bank. Supposedly on his way out, he shoots the uncooperative cashier in the head. But frankly, I don't believe that because no one saw him or anyone else run in the bank as the his cohorts were coming out.

At the same time, Cole Younger and Clell Miller mounted their horses and started firing their pistols and yelling for everyone to leave or be killed. The shooting brought up Jesse James, Jim Younger, and Bill Stiles who were waiting at the iron bridge to supposedly guard their escape route.

In the gun battle, an innocent man was first to get hit. He was a local man who was a Swedish immigrant. His name was Nicholas Gustafson. Since he doesn't understand English, and really didn't understand the warnings, he was shot in the top of his head. The poor man lingers in pain for several days before he finally dies.

Now the outlaw gang resorted to using their Confederate guerrilla tactics of trying to instill fear into the local populace. They started screaming and shooting as they gallop through the center of town. While this may have worked in Missouri to keep people at bay, the folks in Minnisota didn't scare as easy and started shooting back. Yes, shooting to kill.

During that seven minute pitched gun battle on the street of Northfield, there is no doubt that locals were shooting to kill. One local who was shooting back was a 19-year-old medical student by the name of Henry Wheeler. The story goes that from a third-floor window of the nearby Dampier Hotel, he used a rifle to shoot and kill Clell Miller. His bullet actually ripped Miller from his horse. Miller was dead before he hit the ground.

Another man who was up for the fight was Northfield hardware store owner A.R. Manning. He shot and killed Bill Stiles, wounded Cole Younger, and even shot a horse out from under the fleeing outlaws. Some say he hit Stiles with a number of rounds from a Remington repeating rifle.

Northfield's townsfolk are using everything that they can find to attack the James-Younger gang. It is said that people threw cast iron skillets, bricks, and whatever else they could get a hold of as weapons. The narrow streets became a gauntlet of sorts, a narrow canyon that trapped the gang. The people shot the bandits with every sort of rifle and shotgun that they had. The pistols of the outlaws were useless against rifles and shotguns of the people protecting their town.

In the end, two outlaws were dead in the street and others were wounded. Frank James was hit in the leg, and Jim and Cole and Bob Younger were shot up. The remaining outlaws fled Southwest. Right behind them was one of the largest criminal manhunts in the history of the United States. In fact, a posse of more than 1,000 riders was formed to track down the gang as they fled.

About two weeks later, the posse caught up with them and the three Younger brothers were either shot and captured in a gun battle at Hanska Slough near Madelia. During that gun battle, Charlie Pitts was killed as well.

It was all over in seven minutes. The result was that the robbery failed because of the townsfolk quickly responded to the outlaw threat. They proved that an armed citizenry doing what's needed makes the difference. What took place in Northfield, Minnesota, is a very good example of how citizens took good care of their own. They had a real sense of responsibility for their towns back in the day . 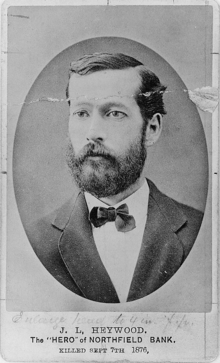 Joseph Lee Heywood would rightfully go down in history as a hero for what he did.  Fact is while there was $15,000 in the Northfield bank vault, the outlaws only made off with $26.70 from what they grabbed off the counter on their way out. The bad guys never got to the cash because it was protected by Joseph Heywood. An extremely brave man.

While Frank is said to have gone straight, Jesse James kept up his criminal ways until he was killed by a close friend and fellow gang member, Robert Ford, on April 3, 1882. There was a lot of money on Jessie's head and Ford wanted it. While some call his killer "the coward Robert Ford," there are those who admit that Jesse James would have done the same thing for money if the roles were reversed. That's the outlaw way.