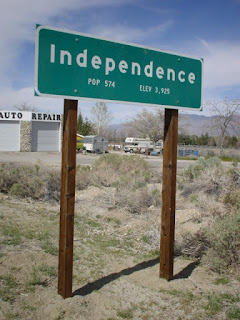 Inyo County is the second largest county in all of California with an area that is over 10,000 square miles in size. Imagine if you would, a place with all of that land yet only 46 square miles of water. Yes, only .5% of the entire county is water.

Imagine a place where it's lowest elevation is actually a minus 282 feet below sea level. That's the Badwater Basin in Death Valley which is the lowest point in all of North America.

At the same time, that place has the Owens Valley which is the deepest valley on the American continent, some sources say both the North and South American continents. And yes, it also has Mount Whitney at an elevation of 14,505 feet which is the highest point in the contiguous United States. To add to that, imagine if you would that 13 of California's 15 mountain peaks which exceed the 14,000 feet elevation are located in that one county. Yes, that's Inyo County.

As for it's history, Inyo County has been the homeland of the Coso, Mono, Timbisha, Paiutes-Shoshone and Kawaiisu Indian tribes for centuries. As with other tribes around the country, these tribes spoke languages specific of those tribes and not all the same language. The tribes are still there today.

The U.S. Army established Camp Independence about three miles from the town of Independence in the Owens River Valley on the eastern slope of the Sierra Nevada on July 4th, 1862. Independence is the county seat of Inyo County, California.

Though it was never officially designated a fort, it was a garrison there to provide protection for the miners who were having troubles with Indian marauders and bandits in the area. With 100 soldiers who were housed in a barracks of wood frame construction, the post had a storehouse and hospital built of adobe, and it included a chow hall, kitchen, bakery, a guardhouse, workshops, sheds, corrals and a couple of large gardens. It's said that the place was used as a refuge for settlers during Indian attacks during the Civil War years. The garrison was closed in July of 1877.

As for the creation of Inyo County, it was actually formed in 1866 from what was a part of the unorganized Coso County which was created in 1864 from parts of Mono and Tulare Counties. Inyo County grew bigger when it acquired more land from Mono County in 1870 and from Kern and San Bernardino counties in 1872.

As stated before, the tiny town of Independence is the county seat of Inyo County, California. The County Sheriff's Office and County Tax Collector were one and the same for years until the 1920's when the Sheriff's Office and the Tax Assessor Office were split into two separate county agencies. Yes, it was very common in the Old West to have the Sheriff act as the County Tax Collector. In most counties, a Sheriff was given an "incentive" to collect taxed by allowing a Sheriff to keep a percentage of what he could collect. In some cases, it was as high as 10 percent of all taxes. That in itself was a great incentive for Sheriff's to collect taxes. Of course, it was also a great incentive for people to take the job of County Sheriff.

The first Inyo County Sheriff was W. A. Greenly who was appointed in 1866 and served for only one year. It's said that in those early days, many of the county officials who were appointed only served one or two years before resigning for one reason or another. The second sheriff was William L. Moore who was appointed and served two years before leaving. Thomas Passmore was the third man to take the job of Inyo County Sheriff.

Sheriff Thomas Passmore was on the job for three years when on Sunday, February 10th, 1878, he was shot and killed in Independence. His murder took place while attempting to apprehend an individual who had killed another man earlier that evening. The killer had gone to a saloon that was well known to be the hangout for outlaws and gamblers, the lowest of society there.

Sheriff Passmore arrived at the saloon and stood outside where he ordered the killer to come out and surrender. The Sheriff knew he'd be smart to stay outside because he'd be completely outnumbered inside the saloon. He banked on his being able to take the killer if he came outside.

It's said that when the killer refused to come out, Sheriff Passmore had no other choice and decided against his better judgement to go in and get him. Yes, he decided to walk into the den or thieves and bandits, gamblers and con artists, prostitutes and bushwhackers. What he didn't know was that in essence, he was walking into a trap.

It's said that as the Sheriff walked up to the saloon doors, a couple of toughs moved in to block his way into the saloon. It was as he was being held in place at the doors when a shot rang out and the Sheriff was struck in the chest with a round.  Someone inside the saloon opened fire and shot through the door. He was killed before even entering the saloon.

While the lowlifes inside the saloon might have thought that a good move on their part, they quickly learned how horrible a mistake they made.

It's said that Sheriff Passmore was not cold yet when outraged townsfolk put out the hue and cry and then took arms. Soon the town's citizens gathered and surrounded the saloon. Then they opened fire on the saloon. They fired hundreds of rounds into the building wounding many inside.

Sheriff Thomas Passmore was the first lawman to be killed in the line of duty in Inyo County. Right after his death, former Sheriff William L. Moore was asked to take the job again. Sadly, just 16 months into his second term, Sheriff Moore was also gunned down.

Sheriff Moore rushed into the saloon and immediate found two men struggling over a gun. Sheriff Moore made the mistake of getting in-between the men while trying to grab the gun. While telling the men to stop fighting, the gun went off and a round struck Sheriff Moore in the chest.

It's said that the townsfolk wanted to hang them both, but instead they were arrested by some of the people there. They were held for trial and were charged with Sheriff Moore's murder. Both of the men was convicted of the murder of Sheriff Moore and sentenced to terms in San Quentin State Prison. No telling how long they were there.

Yes, in its early days, Inyo County was a rough place that experienced its share of violence. According to the Inyo County Sheriff's Department today:

"Territorial and mining claims were often disputed, and in some cases, the disputes ended tragically. There are many reports of shootings in the mining towns, robberies on the open, desolate highways, and drunken brawls in the townships. Many crimes went unreported because, as mentioned in some historical accounts, local citizens did not want to inconvenience the sheriff because of the great distance he had to travel. The sheriff and his deputies (and there were very few deputies) had to be brave, tough and resourceful.

One colorful story speaks of how several men were discovered 'stealing ropes with horses attached' in an Inyo County township and were later found hanging from telegraph poles. It was assumed the men committed suicide.

From 1866 to as recently as the mid-1950s, the sheriff deputized local civic-minded citizens. Training was non-existent or on the job. Almost all of these deputies were farmers, ranchers, miners, business owners or even doctors. They came from all walks of life, and varied backgrounds, but they were the sheepdogs of their communities who stepped up to guard the sheep from the wolves. They responded to trouble only when called upon, and they did so without hesitation.

These early pioneers were well-respected members of their communities. Walter Reed, a local veterinarian and county constable, was shot and killed in 1912 while assisting the Bishop City marshal in the arrest of a local opium dealer and brothel owner.

Lemoyne Hazard, a deputy sheriff, owned a Dodge dealership and garage, wrote articles for travel magazines promoting the Eastern Sierras, placed highway mileage markers in the form of a giant red fish from Los Angeles to Salt Lake City, and was a member of the Bishop Union High School Board of Trustees. Deputy Hazard was shot and killed in 1925 while attempting to arrest a drunken, shotgun-wielding man who assaulted his wife and parents."  -- per Inyo Sheriff's Office.

Of course, as for the Inyo County Sheriff's Department, they fight the good fight of maintaining order in some of the most rugged terrain on earth. The lawmen of Inyo County face the same problems as the lawmen who came before them, and we can all be thankful that they are steadfast in their duty.

Today, Inyo County has a population of about 18,000. But at the same time that that's true, it's also a fact that the population there grows when millions of tourists visiting the Owens Valley, Mount Whitney, and Death Valley, pass through there each year.

As for me, well it is a rural county that truly enjoys it's rural quality of life and I love that about the people there. I haven't been there in a few years, but the beauty of that high desert county is something to see. It's a place that I look forward to going back to for a visit.

Being impartial is something we expect in umpires, referees, and historians.
-- Tom Correa