Since many of you have written to ask if I use Facebook to circulate my blog? I can assure you that I do. My blog's Facebook page is The American Cowboy Chronicles on Facebook. So if you want to LIKE my blog's page, please do so. It helps me get Facebook off my back when I share a post to the groups that I belong to. For some reason they think my posts are spam! Imagine that.

My recent post on my Facebook page was about Memorial Day here in Glencoe. It has always been a special day for me. I hope you took the time out this weekend, as I did, to remember those who gave us so much.

Talking about Facebook, here are a few memes that I've made and people have sent me to share on my timeline. I just posted the one below today. 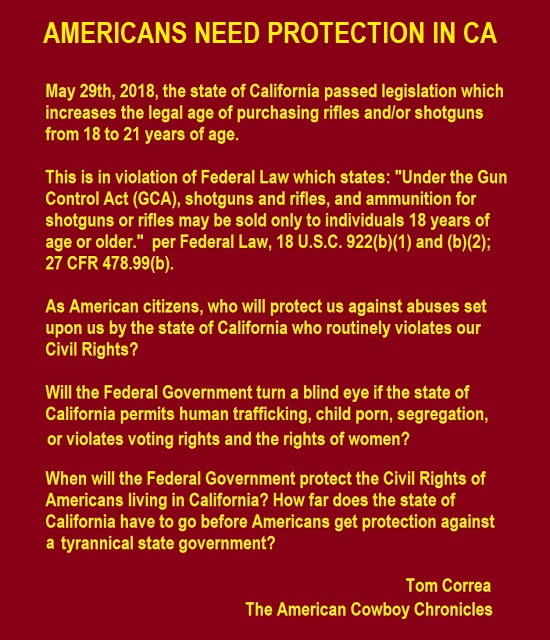 Yes, believe it or not, it was reported that a California measure will make 21 the legal age to buy rifles or shotguns, up from 18, and seeks to prevent people from purchasing more than one long gun a month. How any of that will reduce a students desire to kill other students is beyond me, but then I think it's just an excuse for furthering the Democrat agenda of disarming Americans in California and the nation.

The 23-10 vote in favor of the California legislation allows its passage to the Assembly. Make no mistake about this, this is a Democrat controlled state and their policies are meant to take freedoms away from law abiding citizens while doing nothing to stop the perpetrator. In California, Democrats are reducing the severity of the law by turning felony violent crimes into just misdemeanors while releasing inmates convicted of violent crimes. As insane as that sounds, all while embracing Illegal Aliens who are known criminals by the mere fact that they are here illegally.

Republican State Sen. Jim Nielsen of Gerber, California, thinks the state would be better off focusing on criminal gangs and those with mental disabilities, who he argues will be able to get their hands on guns regardless of age restrictions. While he's right, Republicans in this state are hard to find simply because there are so many Democrats in the state.

As for California Democrats? They would rather vote for a known liar, a known criminal, someone with absolutely no moral compass, rather than a Republican. Because of that, our state is screwed! And as for those who write to say that I hate Democrats, save your time for other things.

While I hate using the word hate to describe how I feel about people who vote Democrats into office, especially since I don't "hate" them, I know that I hate the policies of Democrat politicians because they openly want to create a Socialist state where the American people are controlled by the government. But please understand this, I also hate Republican politicians who have the same idea and go along with the Democrat agenda. And yes, I can't stand the people who can't get off their ass and vote to stop Democrats and those Republicans from carrying out their plans.

As for the new legislation to raise the age limit to 21? Nowhere in any of the reports that I've read mentions that the state of California's legislation would be in violation of Federal Law which states: "Under the Gun Control Act (GCA), shotguns and rifles, and ammunition for shotguns or rifles may be sold only to individuals 18 years of age or older."  per Federal Law, 18 U.S.C. 922(b)(1) and (b)(2); 27 CFR 478.99(b).

And friends, since the 14th Amendment defines what it means to be an American citizen and protects certain rights of the people, when will Americans in California get protection against this tyrannical state government?

Really, does anyone care if California violates Federal Laws? And frankly, I really want to know who will protect American citizens against abuses set upon us by the state of California who routinely violate our Civil Rights as is the case with violating our gun rights and failure to provide us with equal representation under the law?

Going back to whether or not the Democrats are using the recent school shootings in Florida and Texas as a reason to violate the rights of other Americans? I think that's just an excuse, a convenient talking point, to further along the Democrat desire to disarm Americans.


After the last school shooting in Texas, I read again where another shooter claimed to be bullied by students and teachers. I was curious as to how much of this is really going on?  So I started doing research into this and I can tell you that this is an epidemic in our schools.

Now I don't think being bullied by teachers or students should excuse any student for doing such a heinous act as killing other students. Nothing excuses that at all. In fact, I posted this meme on Facebook to make my position crystal clear. 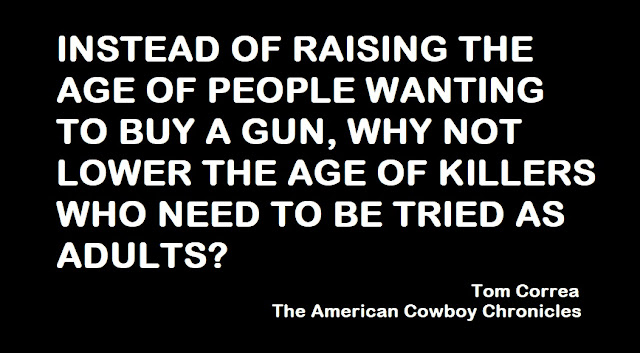 Yes, by teachers. Some who hate Conservatives. Some who hate children from Christian families for their faith. Some simply because they are white, and some because of having physical limitations. Imagine that.

Knowing this, I put out this meme with the hope that it might start people thinking. 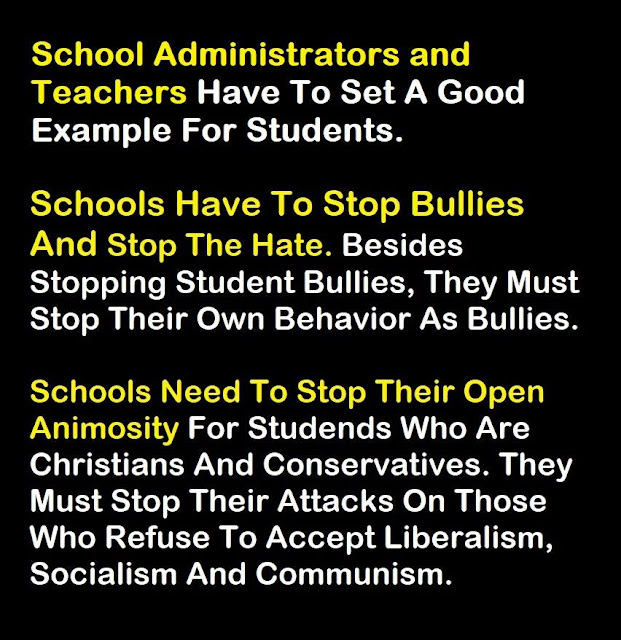 After receiving the meme below, I had a hard time believing that some of these all American companies would possible be for Gun Control and the repeal of the 2nd Amendment of the United States Constitution. 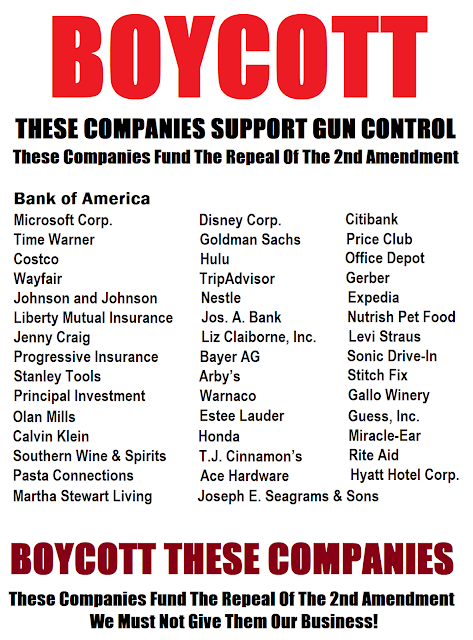 The person who sent me this meme sent me information showing that these companies and others support Gun Control and some actually support the repeal of the 2nd Amendment through open support and through their support of Democrat and Republican ant-gun/ anti-2nd Amendment politicians.

For right now, I'm boycotting all of them until I can find proof that what I'm told is not true and they wouldn't do such a thing as support the dismantling of our Bill of Rights. 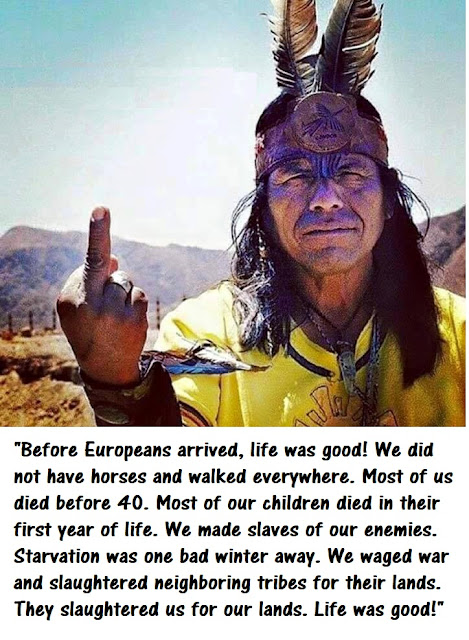 A friend sent me the above meme a while ago. The native American in the picture was supposedly flipping off Whites in a Columbus Day meme attacking Columbus. No, it didn't matter that Columbus never ever stepped foot on North American soil. The meme was just supposed to be about hating Whites.

My friend who sent it actually wrote the commentary below the picture. He said he wrote it after talking with other native Americans about the plight of his tribe before the arrival of Europeans. I found his commentary interesting considering that he said he wrote to tell me that he took some of that information from my blog. And no, it doesn't surprise me that he was not real popular with other native Americans after posting this.

A friend sent me the meme below about Trump Derangement Syndrome. 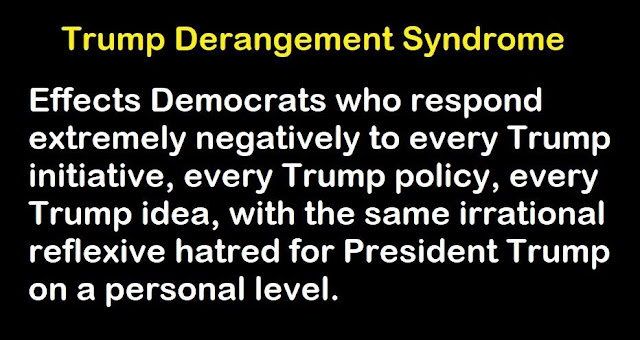 He also sent me the meme below. The quote that is attributed to me is actually mine from a conversation with him when I was taking about taking a break from politics for a while.

I can't say that I especially "enjoy" politics. And while that may seem like a lie to most on Facebook who follow what I post, I find that I hate Liberalism, Socialism, and Communism, being celebrated by people on the Left. So in essence, whether I "enjoy" it or not is not an issue because I find myself fighting against those ignorant bastards who want that for America. I find that I'm trying to fight the Left's propaganda machine with my love of America. 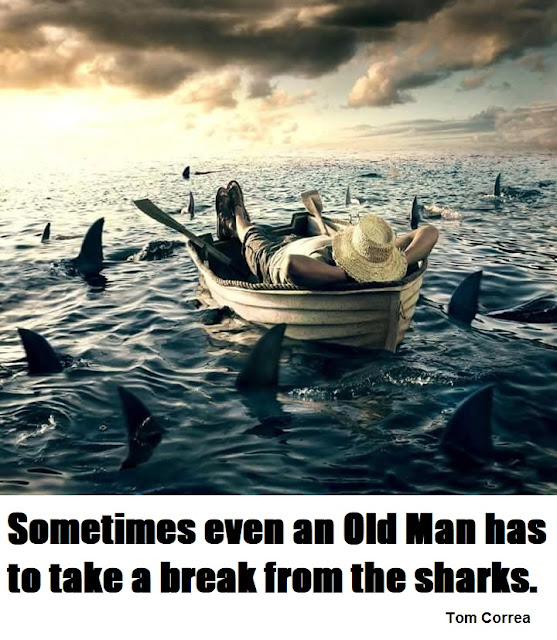 I love this picture. As I said, it was sent to me by the same friend who sent me the meme defining what the Trump Derangement Syndrome is all about. He said that this made him think of me.

He said it appears that I don't care about how I'm always being attacked on Facebook for my Conservative views such as my love for America and our ideals, attacked for my support for President Trump, our military, and our rights of self-defense. He said that I am the Old Man and the sharks are angry Democrats.

I have to say that at first, well, I didn't know how it reminded him of me. After he explained it to me, I now take it as a compliment.

But I did tell him that I care about the opinions of Democrats and other America haters sometimes when the moon is high in the noon day sky, or when sweet-tea is better sugarless, or when I trust anything coming from CNN or MSNBC. I care about the opinions of Democrat on the day when I grow back a full head of hair, when I feel that the NFL hasn't sold us out and let us all down, when I side with a Clinton or their stooges, when I stop thinking Obama pulled off the greatest hoax in American history, on every 7th Friday of each month when Democrats wave Old Glory or show respect for our military.

But seriously, I don't care for the opinions of people who think Obama did a great job and believe that taking away my guns will somehow stop school children from killing each other or stop blacks from killing blacks in Chicago.

Frankly, I could care less what people filled with hate for President Trump are saying. I see the hypocrisy of those on the Left who did not care about Bill Clinton's sexual doings in the Oval Office, yet now suddenly care about what private citizen Donald Trump did before the 2016 Election, as laughable.

While I try to focus on American History, specifically the Old West, on my Facebook blog page, I still get a number of requests from Facebook friends on my blog's page who want me to talk about my Conservative values which I proudly celebrate! And while I have lost a few readers over my Conservative views, I find it sad that they can't open themselves up to see the other side of the story. If they could, then I believe they'd see the need for Conservatism in America and why we need to get off the Socialist path which we were on.

So there you have it. There you have a glimpse into my Facebook posts and a very small taste of what my friends send me. I hope you enjoyed this.

I want to apologize for not posting more articles lately. I've also been very busy researching more Old West stories for you. And yes, I am working on my first book which is a compilation of my Old West stories. I hope it won't disappoint you.