I received an e-mail calling for a proposed Amendment to the United States Constitution mandating Term Limits for members of Congress. After reading it, it makes too much sense not to pass it along as something that Americans should demand be looked into.

For one reason that it should be given some consideration is that I do not believe that our system was designed for "Professional Politicians" who view legislating and politics as a career. And second, the fact that there is just too much temptation to bite at the apple of corruption.

The abuse of power is a human weakness. It does not happen to all, but it does some.  Some know how to accept the authority that they have been given and use it wisely, while there are others who take their new found power and run amok changing things that were never theirs to change.
And no, I'm not just talking about President Obama, Harry Reid, or Nancy Pelosi .

We've all seen the Coach or High School Teacher who demands things of the children in their charge that was definitely not in their scope of authority. Many of us have known a Police Officer who decided that because he wears a badge that he is above the law and flaunts his power.
I once had a teenager working for me who cleaned my stables and fed my horses. There was that day when she showed up in tears and said that her High School teacher decided to mock her and make her look like a fool in front of the other kids just because she was a Christian. The teacher who obviously wasn't one was merciless in his criticism of her chosen faith.
Complaining to the school administration did not help, and in fact the administration warned the teenager not be so open with her religious beliefs as there were people in school who they were sure was being offended.
No kidding! I was amazed to hear that wearing a cross or saying a prayer before you eat your lunch was thought to be "offensive" by the High School administration at the time. To me, the entire administration over-stepped their authority. Especially in telling the young gal how not to practice her faith.
So how about Congress, the federal government, can they tell you what to do and when with no regard to your rights as a citizen? Have they over-stepped their authority while being OUR representatives? And if so, why? Is it because some have been on the job so long that they have forgotten who they work for and why they are there?
At one point in man's existence, we figured out that we needed rules. We do know that religions played a huge role in creating rules and including the Ten Commandments which came many of the rules and subsequent laws that were needed to govern people for a healthy society. After all from rules came laws, and with laws came people to make them, and with that came those who enforced them, and of course with that there were those who broke the laws. Then the cycle repeats itself.
Now we have Legislators who constantly make laws, so much to the point that citizens almost cannot help but break some law and some point.
And what does any of this have to do with Congress and the need for Term Limits? Well, it seems to me that the intent of the Founding Fathers was to have representatives of the people present so that so many laws weren't necessarily needed. By way of compromise our representatives would be able to hash out what was needed without burdening the public with unnecessary laws or regulations. Our representatives were supposed to be their on our behalf.
The United States Constitution was not written to govern the people. It was written by the people to govern Government. It is there to tell government what it can and cannot do. No kidding!
Today it seems that there are some in Congress who believe that they are there for themselves and that they are not there to represent you but instead to help control you. That my friends is an abuse of power.
Actually to my way of thinking, it is as much or worse than any other abuse of power. It's worse than if they would be gaining special favors or monetary gain of some sort. It is worse because it goes against the fabric of our soul as a Nation. To want to control the American people out of a sense of power is not only an abuse, it's anti-Americanism.
When our representatives get to the point when they feel that's it's OK to be like the bad Cop because they wear a badge that they are above the law, well that's bad enough. And when they think and act like that ignorant High school teacher mocking and being critical of someone's Christian faith all because they are not or they owe their status to Atheist, then that is horrible indeed.
But to me, the worse abuse of power is that shown by our representatives -- whether it's a local Supervisor or a Senator or the President -- when they start to act as though he or she is not there on your behave but instead is there on behave of the government to control you.
Well then friends if that is the case than that is the abuse of power that must be dealt with before all of our liberties are taken from us in the name of some sort of oligarchy where only the powerful control the government.
Here's the proposal for Congressional Term limits that was sent to me. To me, it makes sense.

Proposal for a Congressional Reform Act of 2011

1. Term Limits.
12 years only, one of the possible options below.
·        Two Six-year Senate Terms
·        Six Two-year House Terms
·        One Six-year Senate term and three Two-Year House terms
2.  No Tenure / No Pension.
A Congressman collects a salary while in office and receives no pay when they are out of office.
3.  Congress (past, present & future) participates in Social Security.
All monies in the old Congressional retirement fund move to the Social Security system immediately.  All future funds continue to flow into the Social Security system, and all Congress (past & present) participates with the American people.
4.  Congress can purchase their own retirement plan, just as all Americans do.
5.  Congress will no longer vote themselves a pay raise.  Congressional pay will rise only by the lower of CPI or 3%.
6.  Congress loses their current health care system and participates in the same health care system as the American people.
7.  All contracts with past and present Congressmen are void effective upon date of ratification.
I agree with those who say that serving in Congress is an honor and should not be looked at as a lifelong career move. The Founding Fathers had envisioned Citizen Legislators in a legislature with citizen participation.  A citizen legislature is one made up primarily of citizens who have full-time occupations besides that of being a legislator. They did not envision what is happening today.
James Madison wrote that "legislators should be called for the most part from pursuits of a private nature and continue in appointment for a short period of office."
We should adhere to his wisdom. 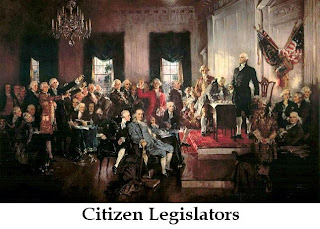 Posted by Tom Correa at 1:12 AM No comments: