As most of us already know, American horses are not raised for food. I really don't know the extent of eating horse meat in other countries, but we don't eat out horses here.

Besides the fact that it's just not done here, our horses are unsafe to eat.

It's true! Because most of our horse are given a wide variety of drugs and veterinary treatments over the course of their lives, all which have warnings that state that they are not to be given to animals that will be used as food, their meat is dangerously unfit for human consumption.

We know this is absolutely true. There is no doubt that horse meat is unfit for human consumption. People should not eat horse meat. And honestly, Americans don't.

Yet, even while knowing this, it is estimated that tens of thousands of American horses are slaughtered each year.

The horses are not all wild horses that some idiot in France is led to believe is "organic" because they are wild horses captured and slaughtered off the open range.

Fact is the vast majority of horse being slaughtered are mostly domestic horses, our riding horses, our race horses, and even our children’s ponies.

They are bought and gathered in all sorts of way, some at "Killer Auctions" others through simple sales, others from the open range, transported and slaughtered.

Their meat is usually shipped to Europe and Asia for human consumption. Some of these countries see horse meat as a "delicacy," others see it as a staple.

Either way, we Americans see eating horses as an unneeded source of food.

Now the resumption of commercial horse slaughter in the U.S. has been blocked when Congress passed a budget measure that withholds money for required Federal Inspections of the slaughtering process.

The measure stops the Agriculture Department from spending money for inspections necessary for slaughterhouses to ship horse meat interstate  - which eventually is exported overseas to people who would eat horse.

Horse meat slaughterhouses have been hit with all sorts of lawsuits to them. The action by Congress came as a New Mexico judge granted a preliminary injunction against a Roswell company, Valley Meats, from moving forward with its plans to start slaughtering horses.

The lawsuit could serve as a possible insurance plan in case the federal government provides inspection funding in the future.

But after federal money was restored in 2011, plants in New Mexico, Missouri and Iowa began trying to start horse slaughtering.


Valley Meat Co. in Roswell, N.M., has been fighting since 2011 to convert its small cattle operation to horse slaughter.


Last year, Valley and plants in Iowa and Missouri received federal permits to open, but the efforts have been blocked by a series of court orders.

Valley's efforts ignited an emotional, national debate over whether horses are companion animals or livestock, and sparked divisions between rescue groups, Indian tribes and politicians over the most humane way to deal with neglected and abandoned horses.

Despite the growing government action to keep horse slaughter from resuming, an attorney for Valley and Rains Natural Meats of Gallatin, Mo., said his group will continue to fight to produce horse meat.

Blair Dunn said the companies would be looking at filing a claim that the funding ban violates provisions of the North American Free Trade Agreement.

Blair Dunn said the company will continue to wage a legal fight to convert its cattle processing plant to the slaughtering of horses. He contended that the federal move to withhold money for meat inspections could cause U.S. trade violations.
"I don't see them opening now. No matter what, they are not going to violate the law," said the attorney, who also represents a plant in Missouri that wants to produce horse meat.

Valley Meat is trying to disqualify the judge who's handling the case because of comments posted by horse slaughter opponents on a Facebook page for the judge's election campaign.

Judge Wilson issued an order saying he would consider setting a hearing on the company's request.

Congress has put an an End to Horse Slaughter

"Americans do not want to see scarce tax dollars used to oversee an inhumane, disreputable horse slaughter industry," Wayne Pacelle of the Humane Society argues in a press release.

"We don't have dog and cat slaughter plants in the U.S. catering to small markets overseas, and we shouldn't have horse slaughter operations for that purpose, either," Pacelle writes.

He went on to say, "Americans care for horses, we ride horses, and we even put them to work. But we don't eat horses in the United States. And we shouldn't be gathering them up and slaughtering them for people to eat in far-off places."

The Humane Society was one of a number of groups involved in litigation that has blocked proposed horse slaughterhouses from opening in New Mexico, Missouri and Iowa.

The last domestic horse slaughterhouses closed in 2007, a year after Congress first cut funding for the inspections in an attempt to shutter the industry.

"The message from Capitol Hill is loud and clear on this issue: Our horses deserve better, and this abhorrent industry will not be tolerated," said Nancy Perry, senior vice president of ASPCA Government Relations.

It's true! Horses don't deserve to be callously slaughtered for human consumption, but there are those who will try to justify their actions - no matter how wrong they are.
And yes, I love it when people try to make excuses for wanting to kill good horses for a profit. It definitely shows what kind of person they really are.
One such excuse being used by those in favor of Horse Slaughter is that "horse slaughter is a practical way to handle the problem of abandoned horses."

They go on to say horses can be very expensive to maintain, and when owners can't afford them - that "it's not unheard of for them to be sent to factories in Mexico and Canada."

Imagine that for a moment. Think about just how stupid they think we are!

They don't say, "they take them to Horse Rescues and other Non-Profit facilities that take in horses."

No, they paint the situation as dire and bleak - and spin the facts to say that the ONLY alternative is owners have is to slaughter the horse and sell them as food!

Is that ridiculous or what?

Well, that ridiculous argument was put forth by Republican Sen. Jim Inhofe from Oklahoma, who actually tried - but thankfully - failed to strike the ban on funding inspections from the spending bill.

And no, Inhofe is not giving up yet.

After the vote to cut funding, Inhofe said he and Rep. Markwayne Mullin, another Republican from Oklahoma, plan to introduce separate legislation that would lift the ban on funding for horse slaughterhouse inspections.

Someone should advise Inhofe, Mullin, Dunn and others who what to continue the unwarranted slaughter of America's horse that Congress has spoken and the provision bans the funding of U.S. Department of Agriculture inspections at horse slaughter plants.

The fact is that without inspections, those slaughterhouses are not supposed to be in business. And unless Congress restores the funding in the future, right now it's Game Over.

So for the moment, at least for right now, the herds of wild horses in our nation are just that much safer because there is one less predator out there trying to kill them.
And as for domestic horses, we should remember that most of these horses were most likely wonderful companion animals while they could afford them.

Knowing that, we should understand that the vast majority of horse owners out there will do everything in their power to find their horse a good home,

Just as they have done in the past when they can no longer afford them, the vast majority will sell them, or give them away, all in an effort to find new homes for these they loved. 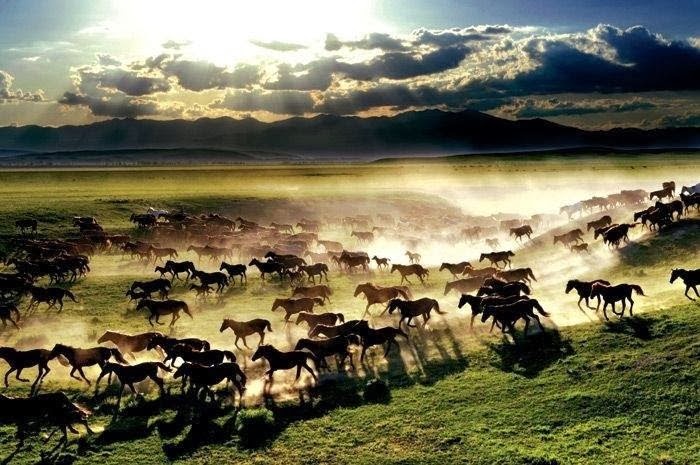 Posted by Tom Correa at 2:21 PM No comments: