Fascism Is A Product Of The Left 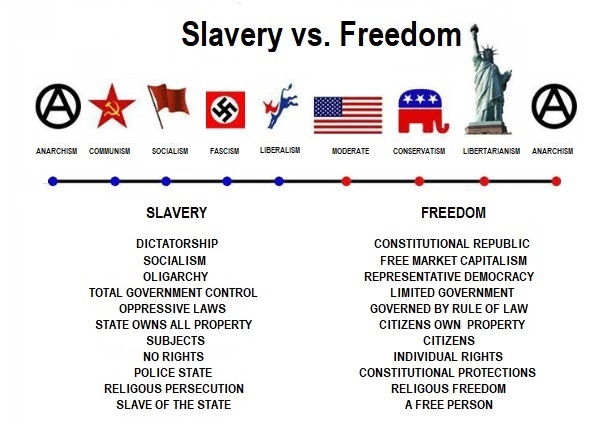 A reader wrote to ask, "Is Fascism the end result of moving too far to the Right on a Political Spectrum?"

After reading the short and simple question, I immediately thought of a wonderful teacher I had many years ago. For a moment, I actually remembered the first day that I sat in his class, not knowing what to expect after my having returned to school after serving four years in the Marine Corps.

I was gifted to have teachers who encouraged asking questions instead of just accepting what we are fed. He was one of them. And yes, I still remember how he explained to our class why he thought most Political Spectrum diagrams are wrong.

Fascism, as in that of Nazi Germany, is all about putting the needs of a political movement or a regime above the needs and welfare of the individual. It is "a centralized autocratic government headed by a dictatorial leader, severe economic and social regimentation and forcible suppression of opposition." It is all about strong autocratic or dictatorial control.

My teacher contented that Fascism, as practiced by Hitler's Nazi Germany, does not belong to the Right of such a diagram for many reasons. He made the argument that merely by the nature and conduct of Fascist governments, their dictatorial nature, and the totalitarian aspects of their systems, Joe Stalin's Soviet Union, Moa's Communist China, Castro's Cuba, and other Communist countries headed by dictators around the world are no different than the Fascist Nazi regime in their practices.

I still remember how he told our class how he felt that the Left doesn't want to face its ownership of fascism in the exact same way that they don't want to face up to owning the practice of slavery. Yes, he said the Left is like a mother who is ashamed to acknowledge that she is responsible for bearing a criminal son.

Almost 40 years later, after attending his classes and seeing what I have for myself, I still agree with his conclusion. Fascism is another creation of the Left that the world could have done without.

So why was he so vehement about Fascism never being a part of the Right in a Political Spectrum? Well, that had to do with simple logic. Fascism is incompatible with the ideals of the Right, which expound freedom and liberty -- not slavery and government control.

The ideals of the Right, that of Conservatism and Libertarianism, is that of less government intrusion in the lives of citizens, a government that observes our God-given Rights, a government with a smaller footprint in society, a government that stays out of the way, doesn't over-regulate, doesn't over-tax, and has a very minimal negative impact on the lives of citizens. Both Conservatism and Libertarianism are all about getting as close to having total individual freedom as can be obtained while still having the government fulfill certain services.

Does any of that sound like fascism? No. It doesn't. As part of the Right Side of the Political Spectrum, both Conservatism and Libertarianism are about creating more freedom -- not less as Fascism, in fact, does in practice. Fascism is the complete opposite of the ideals of freedom.

So what comes after Libertarianism on the Political Spectrum if not Fascism? I was thought that anarchy waited at both ends of the spectrum. From what I've seen, I still agree with that.

On the other side of the spectrum, on the Left, anarchy is there as the end result of slavery. A people who allow their nation to move to the Left sets itself up for oppression and enslavement while their rights and freedoms are taken away from them. Because the loss of freedoms can only come from the Left, such totalitarian nations have governments that enslave, coerce, and intimidate their people.

Tyranny creates resistance, rebellion, and a breakdown of the law. As with any breakdown of law and order, anarchy, chaos, and mob rule ensues.
It is common sense that a government that asserts more control on its people cannot come from the Right which wants less government control. Since totalitarianism is a form of government that attempts to assert total control over the lives of its citizens, it is in 180-degree contrast with the Right which is characterized by a small central government that wants less interference from the government. The Right is all about wanting a government that exercises little to no control over any aspect of our lives.
The Left is all about coercion and does not permit individual freedom. In reality, the Left's Utopian government would be akin to a government made up of slave masters. In contrast, the Right's idea of a Utopian government would be one made up of abolitionists.
The biggest lie that the Left tells us is that Fascism is a part of the Right Side of the Political Spectrum. The second lie that the Left spreads is that "complete control by the government is good for us."
Those who are selling the lie that Fascism fits anywhere on the Right Side of the political spectrum are selling a bridge. Sadly, there are those who will buy that bridge simply because they refuse to look at what Fascism does in practice. Maybe once they did, then they would see how Fascism and Communism are siblings from the same mother whose name is "Slavery."
Fascist Communism has disillusioned supporters who like to pretend that a Communist government is one that focuses on equal treatment and opportunities for all citizens. They pretend that is true, even though such a thing has never been the case in Communist governments. The reason, Communism creates a ruling class of oppressors no different than Fascism does.
People should understand that both Bolshevism and Nazism are dictatorships. Both systems are about complete control. Both systems have slaughtered millions and prove without a doubt that the Left's idea that "complete control by the government is good for us" is just a lie they tell while separating us from our freedoms.
The irony of all of this is that the Left believes that government control is a good thing -- unless they are not part of those in power.
Tom Correa
Posted by Tom Correa at 12:01 AM No comments: