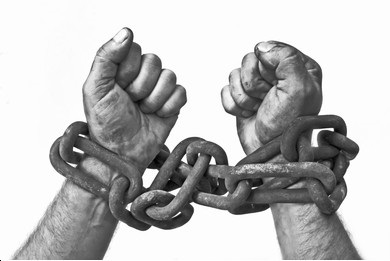 This is one of the shortest blogs that you will ever read here. This post is an answer to three questions that I received from a reader. The first question, "What's wrong with Communism?" The second question, "Why do you (Tom Correa) hate Communism so much?" And the last question, "How does Communism relate to what's happening today?"

Before going into my answer, let me just say that I have to admit that I was tempted to go into the whole history of Communism. I was going to go into how Communism is slavery, how it makes its subjects slaves of the state, how it deprives people of self-worth, dignity, and basic freedoms.

I was going to go into how Communist governments restrict the human spirit, make demands at the point of a gun, how Communist regimes intimidate and extort through force and threat, and fear of retaliation. I was even going to talk about how Communism has murdered more than a hundred million of its own people during its history.

As for why I hate it so much? I was going to write about how, when I was a U.S. Marine and just 19 years old, I participated in the last two military operations in Vietnam. I was going to describe how I saw the terror on the faces of those fleeing Communism during the Fall of Saigon, South Vietnam, with nothing more than they could carry. I was going to say how it was then that I learned how fear of retribution for wanting to be free can force people to flee for their lives. But I decided not to.

Yes indeed, I was going to go into all of that simply because I thought for a moment that someone might be interested in knowing about the callousness, the indifference, the pain, and the suffering of those who have had to live under Communism, and why I hate Communism so much. But I decided not to. I decided not to while knowing that long and drawn-out articles about such crimes against humanity don't hold the interest of people who really should be interested in knowing about such horrors. Yes, especially when such horrors may soon be ours.

Instead, I present to you what I think is wrong with Communism:

Communism is all about the total control of every aspect of our lives. Control of their people is absolutely paramount to a Communist regime. Control is their weapon to stop freedom from flourishing. Control enables Communist regimes to hold on to power. That, my friends, in a nutshell, is what's wrong with Communism.

Communism doesn't believe in citizenship or a person having God-given rights. Communism believes the only rights that we have all come from the government. And as such, Communists believe our rights can be taken away by the government. Communism is a form of government in which a powerful, omnipresent central government, consisting of a few people with unrestricted God-like power, can regulate and control every aspect of the lives of its subjects.

Communism is the physical and spiritual antithesis of Americanism and our founding principles. I say this because Communism does not allow its people fundamental rights, such as liberty, free speech, freedom of religion, due process of law, freedom of assembly, freedom against warrantless search and seizure, and freedom to protect oneself -- especially against the government.

In our Republic, Capitalism enables the private sector to employ workers through individual business owners, corporations, or other non-government agencies. Communists believe that capitalism is wrong and the private sector must be under government control. The same goes for the affairs of your city, town, and state. Communism believes that all government affairs, no matter at what level, should answer to the central government.

As for my opinion about how does Communism relate to what's happening today?

I believe the detrimental policies and actions of primarily Democrat politicians today are all about Democrats believing they have unrestricted power while attempting to transform our federal government into a dominant all-pervasive Communist government. Those wanting this are enemies to us all. They are against everything America is about.