Extraordinary Case of a Shipwreck 1850 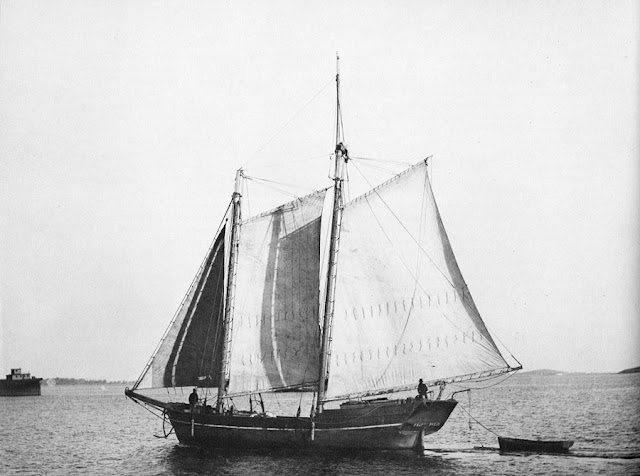 I was once told that ship wrecks along our coasts, especially those that we can see for ourselves, are actually no different than ghost towns of the sea. While ghost towns slowly deteriorate while enduring the elements with each passing year, ship wrecks on our coasts endure the same with each new tide or wave.

Some folks have a naive notion of sea travel back in the 1800s. But fact is, those were treacherous times to be a seaman. The perils they experienced were many. On any given day or night, as unpredictable weather can be, the sea would rise up and claim those who worked aboard ships.

The picture above is that of a mid 1800s schooner about the same size as the General Thornton which is mentioned in the 1850 news article below. The picture is just a way to give my readers an idea of what that schooner may have looked like at the time of her wreck. And yes, below is one example of how bad things were. At it was printed in newspapers in 1850:

We are indebted to Capt. William H. Hopper, of the central road, for the following particulars, which we relate.

Captain Hopkins, of the steamer J.D. Morton, while on her passage from Chicago to New Buffalo, on Friday last, discovered what he supposed to be a raft with some one upon it, some five miles in the lake. He immediately turned his boat and went for the object.

He found the raft made of spars, with Capt. Davidson, of the schooner Thornton, upon it. It appears he was wrecked on the 31st ult., having been seven days and nights without food.

Two of the crew, whose names he did not learn, with the captain, made the raft of the mainmast, main boom and main gaft. The two men dropped off on the third night after, having become exhausted for want of food.

Captain Hopkins describes the scene as most pitiful. Captain Davison had commenced eating his left hand the last night!

Several steamers and vessels have been in sight, and one vessel hailed him, but made no attempt to get him off. Of course the captain is exceedingly weak, but in a fair way for recovery.

Capt. Hopkins, of the J.D. Morton, has shown himself a humane man and the public should recollect it.

A collection was taken up for the unfortunate man, on the Morton, and some $10 was raised, mostly by the crew, headed by the captain.

-- end of article as published in The Daily Sanduskian on September 10th, 1850

The story was said to have been published by The Detroit Tribune, and then reprinted in the The Daily Sanduskian on September 10th, 1850. A few days later two other newspapers published this article below which explained more about what took place:

The Chicago Tribune of the 16th, announces the arrival there of George Davis, Captain of the schooner Thornton, taken up by the steamer Julius Morton, four miles out from Michigan City, floating upon a spar. His vessel was capsized six miles east of Chicago, and two of the hands were lost. The Tribune says:

At the time of the disaster, the schooner Thornton, in charge of Capt. Davis, assisted by two hands, was on her passage from Muskegon, freighted with lumber, belonging to Mr. Parks, of the former place.

The vessel was driven out of her course by the violence of the storm, and on Friday afternoon, when about six miles northeast of this port, she became unmanageable and capsized, precipitating the captain and crew into the angry flood.

Fortunately, a spar, which had been lying loose upon the deck, floated near them, and all three grasped it, supposing the vessel had sunk, though she afterwards floated ashore.

For the next twenty-four hours, the three shipwrecked men were driven about at the mercy of the wind and waves, they knew not whither; at the end of which time, (Saturday afternoon), the two companions of Capt. Davis, exhausted by cold, hunger and fatigue, relinquished their hold upon the spar, nearly at the same time, and sunk to rise no more. Capt. D. supposes that at this time, they were some where near the middle of the Lake.

After the loss of his companions, Capt. Davis was driven about, he knew not whither; the only incidents occurring to break the dreary monotony being the sight of two or three vessels. Only one of them came within hailing distance; and this he thinks was on Monday or Tuesday, he is not certain which.

The vessel was near enough for him to read her name (which we think not best to give at present,) and a man whom he supposes was the captain, seemed to see him in the distance, and afterwards several of the crew joined him and looked in the same direction. Capt. D. thinks they must have seen him, but the vessel held on her course, and the hope of rescue, which he had indulged a moment before, gave place to black despair. He cannot tell where he was at the time.

From that time till he was picked up by the crew of the steamer Morton, between 9 and 10 o’clock A.M. on Friday, there was nothing to relieve the horrible monotony of this lone, aimless, voyage, except that at one time he drifted within about a mile of the eastern shore of the Lake; but he was then too much exhausted — too weakened and benumbed in body, and paralyzed in mind, to make the attempt to swim ashore.

The pangs of hunger became so pressing, towards the last, that the poor sufferer attempted to reach a dead body that floated near him, with the dreadful thought of satisfying it by eating a portion of a fellow-creature, but it eluded his grasp. After this, he does not know when, he gnawed one of his hands to relieve the pain of famine, and afterwards he gnawed the other in the same manner.

It is impossible for the imagination to conceive of the horrible realities of such a voyage — during which, for seven days, the poor wayfarer upon the deep, without a morsel of food, benumbed with cold, and with the prospect of death every moment — where day brought no relief and hardly hope, and the long dreary night added to the horror of his situation — was drifted at the mercy of the elements.

Happily, however, by the operations of a beautiful law, by which the intensity of human suffering after a time deadens the capacity to feel it, Capt. Davis has but an indistinct remembrance of the trial through which he has passed. For most of the time he was in a state of semi-consciousness, and at times he must have slept, though the strong instinct of self-preservation enabled him, through all, to maintain a firm grip upon the spar.

On being picked up by the Morton, every attention was paid to his wants which humanity could suggest, and a physician (whose name we were not able to learn) was taken on board at Michigan city, who bound up his wounded hands and otherwise ministered to his relief. — This morning he was quite cheerful, though much emaciated from his long famine, and the prospect is that he will shortly recover.

It will be some time, however, before he will have the use of his hands, as they are very much cramped and benumbed by his long continued grasp upon the spar, and the gnawing to which they were subjected. His whole body, with the exception of his head and hands, being immersed in the water, he did not suffer much with cold until the last night of the exposure. He is of the opinion that he could not have survived another night.

Capt. Davis is naturally a strong athletic man, as might be expected from the sufferings which he lived through, and we should judge, between 36 and 40 years of age. He is a Scotchman by birth, but has resided here for several years, where he has a wife and two young children, to whom he is happily restored. He has always borne the character of an industrious, honest man.

-- end of article as appearing in the newspapers the Alton Telegraph and Democratic Review on September 27th, 1850.

According the the Great Lakes ships database, the 49 ton 2-mast schooner General Thornton was built in 1837 in St Joseph’s Michigan. She was 56 feet in length, her beam was 15 feet, and was 7 feet deep. She was lost on August 31st, 1850, off Calumet, Illinois, on Lake Michigan. She was wrecked on her route which was Chicago to New Buffalo. And all in all, she met her fate in fairly close proximity to land since it's believed she was only 5 to 6 miles out when claimed by the sea.

All toll, the storm that put her under took the lives of 4 men. She is said to have went ashore bottom up and wrecked, a total loss.

The steamer J. D. MORTON found the Thornton's skipper floating on a makeshift raft five miles offshore. The raft was found on September 7th, and yes the lone occupant clinging to the raft had reportedly begun to eat his own hand to avoid starvation.

As usual, I did not edit or correct the spelling of anything in those old news articles. I reprinted them here, just as I found them.