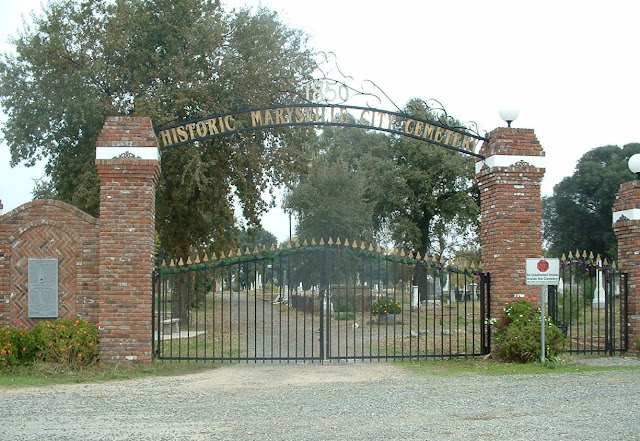 On February 26th, 2017, it was reported that the water released from Lake Oroville has flooded the historic Marysville Cemetery on the ouskirts of Marysville, California.


The report said, "In a city where the dead nearly outnumber the living, corpses are rolling in their graves."

While that is unknown for certain, it is known that as water from the Oroville Dam pounded down its damaged spillway last week, over 200,000 residents living in the surrounding areas and its path quickly evacuated. And more than 30 miles downstream from Lake Oroville, the Feather River swelled and the Jackson Slough over took its banks. That resulted in the flooding of the historic Marysville Cemetery. Even now, it is still under several feet of water. As seen in the picture above, the tops of mausoleums and tombstones can be seen reflecting in the water's eerie surface. The 14 and a half acre cemetery here has flooded before, but the water is said to be now at a level unseen in decades. And while this is now a problem, it is said that over the years, ground squirrels burrow tunnels under the centuries-old pine coffins and unearth bones while creating sinkholes in the soft earth. Of course some grave markers have collapsed under the water's weight while others simply sink out of sight.

Unlike what went on in Louisiana last year when flooding caused caskets to raise up out of their rain soaked graves, the rumors that bodies are floating up in Marysville Cemetery are not true. And least, that's true as of right now.

The Marysville Cemetery was founded in 1850, and that makes it is one of the oldest cemeteries West of the Mississippi River. The Marysville City Council and mayor appoint people to the seven-seat Cemetery Commission. They are tasked with overseeing the graveyard's maintenance.

He is said to have been one of Marysville's first pioneers. But all in all, he is also said to have been a blackmailer and extortionist. Yes, an outlaw of sorts. The reason folks back in the day saw him as such has to do with his actually blackmailing the city for a salary raise in 1870.

He was born in Rhode Island and first settled in Massachusetts where he was married. He arrived in California in 1849 during the California Gold Rush. He then brought his family to Marysville after he established his Undertaker business. A later census shows that they had seven children.

In the very early 1850s, Hamilton was elected City Coroner and kept the Marysville City Cemetery records. He held the position of City Coroner for over 20 years. Yes, while some were digging for gold during that time, he was digging graves.

After 20 years of doing this, he wanted another raise and decided to use the records of who was buried in that cemetery and where they are buried in that cemetery to get his raise. Yes, he then actually fought the city over who owned the cemetery records. Believe it or not, Hamilton tried to say that he owned the city's cemetery records and would not relinquish them to the city of Marysville until he gets more money. Yes, that's why some called him a blackmailer and extortionist.

This went on for a couple of years, until at age 53 on December 5th, 1875, Ebenezer Hamilton died. And no, it's not clear when most of the family moved on from Marysville to Oakland, Alamedia County, California, but it is belived they did soon after his death.

The cemetery is said to be the final resting place for Gold Rush pioneers and explorers who founded the Golden State, and others who settled in the city once considered as a place for the California State capital. But as a result of his death, the burial records of the Marysville City Cemetery from 1850 through April of 1870 were lost and have never been recovered.

The graveyard has nearly 10,000 dead, which includes sections for babies and Veterans, Japanese Americans, African Americans, Chileans, Masonics, Oddfellows and Jews. And yes, in that cemetery is a founder of Macy’s department stores, there is a Wells Fargo stagecoach driver, and there are survivors of the Donner Party.

So yes, the then City Coroner Ebenezer Hamilton actually stole two decades' worth of records of who and where folks are buried there. He never got the raise he was willing to blackmail the city for. The city never got the records back.

And that, well that's why several corpses were accidentally dug up during burials. That's also why after one too many times of that taking place, the city of Marysville ruled that only ashes could be interred there. That may be why it was finally closed in 1983. 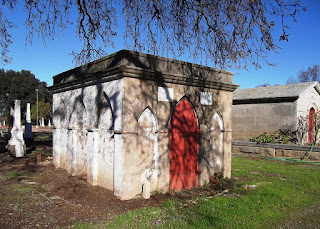 As for Ebenezer Hamilton, he is buried in the historic Marysville Cenetery. The picture above is his family's mausoleum. The picture taken in dryer days.

And yes, it's a safe bet to say that he's probably under water right now. Yes, just the same as all of those souls who today remain unknown and lost somewhere in that cemetery because of the records that he stole and was never recovered.