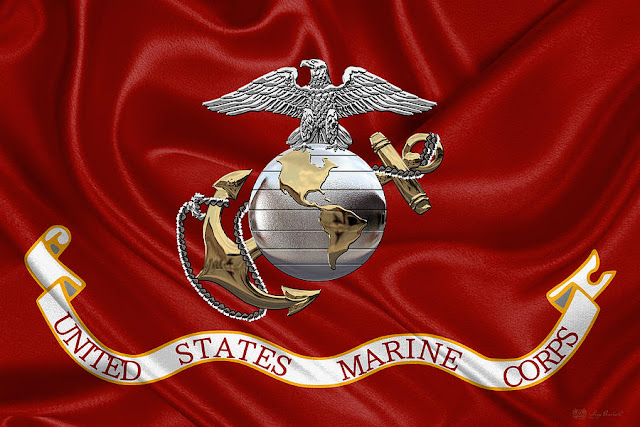 Although a poll out recently shows that Americans disagree with me, I believe that the United States Marine Corps (USMC) is the most important branch of our military. The first reaction that you may have after reading that statement may be something to the effect, "that's no surprise coming from a Marine." But before you dismiss my position on military importance, please hear me out.

Gallup started asking Americans about the importance of U.S. military branches in the 1940s, using various questions over the years. Each year Gallup asks the same question. Recently, Gallup released its annual poll, which shows that Americans feel the U.S. Army is the most important service branch to national defense -- but the United States Marine Corps is still considered the most prestigious.

The annual poll​, timed to mark the start of the long Memorial Day weekend, showed that 26 percent of Americans say the Army is the most important military branch. And, as surprising as it was to me, believe it or not, the Army was followed closely by the Air Force at 23 percent.

By the way, I have a great deal of respect for the Coast Guard. They are great at what they do. While they have periodically been used to assist in military operations, there is a reason that they are not a part of our military. That reason has to do with the Coast Guard's ability to make arrests. According to our laws, the power to make an arrest is not a power our military has because of the Posse Comitatus Laws.

The Posse Comitatus Act (1878) prohibits the use of the U.S. military, specifically the Army, to aid civil officials in enforcing the law or suppressing civil disorder unless expressly ordered to do so by the president. In the 1870s, Southern Democrats in Congress resented the widespread use of federal troops during Reconstruction, and they introduced the law. Subsequently, this law was to stop that.

Since the Posse Comitatus Act restricts the participation of the military in domestic law enforcement activities, the Coast Guard is not a part of our military and has been placed under civilian authority.

As for committing the U.S. Army, their role of importance has to do with our adherence to the Constitution. If we are to adhere to the laws written in the U.S. Constitution, then we are to understand that the U.S. Constitution states that only Congress can lawfully declare war. According to the Constitution, Congress must pass an act of war so that the United States can deploy the Army. Congress shall have the power to lay and collect Taxes, Duties, Imposts, and Excises, to pay Debts, and provide for the common Defense and general Welfare of the United States.

My reasoning has nothing to do with my affection for the Marine Corps and the Navy or some supposed dislike for either the Army or the Air Force. I admire everyone serving in all of the branches. I really do.

I see the Air Forces as having bigger payload capabilities with their B-52s and such, which the Marine Corps and Navy do not have. To me, America shouldn't need them unless it was such an engagement of such enormity that both Marine and Navy airpower isn't able to do the job alone.

Per the Air Force: "The mission of the United States Air Force is to fly, fight and win in air, space, and cyberspace." While they play a key role in war-fighting, the Air Force and its massive air power will always be a support role to commanders who want to disable industrial and military installations or positions of importance.

Can that sort of bombing win a war? No, it never has. The fact is, no, like it or not, unless using nuclear weapons, you cannot win a war with just airpower. Winning wars will always be left to troops on the ground.

In contrast to the Marine Corps, the smallest of the United States Armed Forces in the U.S. Department of Defense with 195,000 on active duty and 40,000 ready reserves, the difference is that the Army's gigantic war machine takes much longer to deploy.

In most cases, it takes months, and there are a lot more logistics involved to get its massive numbers of troops from one place to another. It is a lumbering giant at best. Once awake and in place, it is a force that is second to none -- but it takes a long time to get into the fight.

The Marine Corps and the Navy are more important if we just look at the practical application of American military power around the world.

As for technically requiring a Declaration of War to deploy the Army, per the Constitution, that is not the case with the Marine Corps. No act of war is needed to deploy U.S. Marines.

The Marines can be used "as the President may direct," according to the 1834 Marine Corps Law. Because of that, U.S Marines operate in a state of readiness for combat unmatched by units in other military branches.

A single Marine unit has everything it needs to leap right into combat, including logistical support and close air support, both internally and from the Navy. And yes, Marines keep units stationed on Navy ships that are "afloat" around the world. A force in readiness puts Marines closer to potential trouble spots than troops stationed in the United States or Europe.

According to law, the "as the President may direct" portion of the Marine Corps' job description puts Marines in quite a few non-amphibious situations, including combat far from beaches, running security detail on some Navy ships -- which historically was originally the Corps’ primary function -- protecting U.S. Embassies as well as the White House and transporting the president and vice president in Marine helicopters. By law, 10 U.S. Code 5063, the Marine Corps is responsible, in accordance with integrated joint mobilization plans, for the expansion of peacetime components of the Marine Corps to meet the needs of war.

For me, while I might be biased being a former-Marine, I see the Marine Corps as the most important branch simply because large numbers of Marines can be put ashore anywhere in the world, with lethal firepower backed up by Marine and Naval Air, faster than anyone else can. And that leads me to why I also see the United States Navy as the second most important military branch.

For those polled who see the Navy as being somehow less important than the Army or the Air Force, it's obvious that those polled do not know what the United States Navy does. And no, I'm not talking about the importance of Navy SEALS.

To be real honest, Navy SEALS do a great job for what they do. But, let's face the facts of reality since they are a tiny part of the Navy, they do not represent the U.S.Navy as a whole. In fact, SEALS are not representative of the much bigger overall mission of the United States Navy.

The mission of the U.S. Navy is a lot more than merely deploying a handful of SEALS ashore at any given time. And frankly, the Navy is a lot more than simply the less than half of 1% of all Sailors in the United States Navy who are SEALS -- or those who have anything to do with them. To me, while SEALS seem to do a lot of work for special ops, they have little to do with the bigger mission of the Navy.

What is the bigger mission of the Navy? Per the U.S. Navy: "The mission of the Navy is to maintain, train and equip combat-ready Naval forces capable of winning wars, deterring aggression, and maintaining freedom of the seas."
To accomplish their mission, the vast majority of sailors are truly the unsung heroes of the Navy. To maintaining freedom of the seas, America has Sailors who fuel and repair aircraft, scrap and paint, weigh anchor, accomplish the duties of thousands of assignments to do the heavy lifting, and perform thousands of other jobs both atop the waves and beneath the ocean, all to make sure our ships get from one side of the world to the other. These unsung heroes are at this very moment deployed on about 300 ships and a multitude of bases around the world in every clime and place. They are the "Real Navy," which sadly never gets the recognition they deserve.

Fact is, from Boatswain Mates to Cooks, from Machinist Mates to Aviators, there are over 300,000 active duty Sailors and over 100,000 ready reserve Sailors in the United States Navy. All ready to fulfill the mission of the Navy of maintaining, training, and equipping combat-ready Naval forces capable of winning wars, deterring aggression by their mere presence, and maintaining freedom of the seas for American shipping.

Today, the U.S. Navy has the distinction of being the world's premier naval power. To really understand why there’s a need for a sea-based military in this day and age, just consider this:
Any way you look at it, our ability to freely navigate the world's oceans is as critical today as it was more than 200 years ago. Whether it's by way of oceans, canals, rivers, there remains a great need for the Navy to be out there serving Americans as a guardian for our freedom and defending the life we cherish.

To support the cause of liberty abroad and promoting peace for all humanity, and enabling the safe travel of people and goods to meet the expanding demands of Americans worldwide, America's Navy is unique in that it conducts missions on all fronts: in the air, on land, and at sea.

Sadly, since World War II, the importance of the Navy has not been publicized over the years. Consequently, it is not a surprise that Americans view the Air Force as the most important branch of the military for many years up to the mid-2000s.

Now, as for the Army, the Army has edged out other military branches in Gallup surveys conducted throughout the years, especially the last decade.

Importance does not necessarily equal prestige.

The Marine Corps has consistently been considered the nation’s most prestigious military branch, even if not considered the most important by some, with nearly half of Americans — 47 percent — saying they respect Marines the most.

The Air Force was a distant second, with 17 percent saying it was the most prestigious branch, said the poll.

As for the Marines being America's most prestigious military branch, that doesn't surprise me. After all, as a Marine, I really have to ask who's never heard of "The few, the proud, the Marines."

Marines are America's 911 when an enemy needs its butt kicked. Because of the Marine Corps' history and tradition of landing on foreign shores faster than the Army, the Marine Corps' claim of being the first to fight in every clime and place where Marines can take a gun is legitimate. And yes, God bless the Navy for making sure we Marine get there.

That's the way I see it.

Now, if you would like to do more reading about the Marine Corps' activities from 1865 to 1900 when it was in every clime and place where our fellow Marine would take a gun, please click:
The Late 1800s - U.S. Military Action Abroad 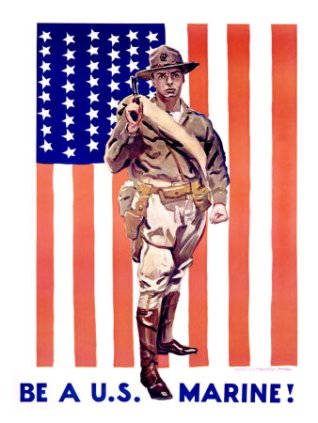