Believing God Is Not Dead Nor Does He Sleep 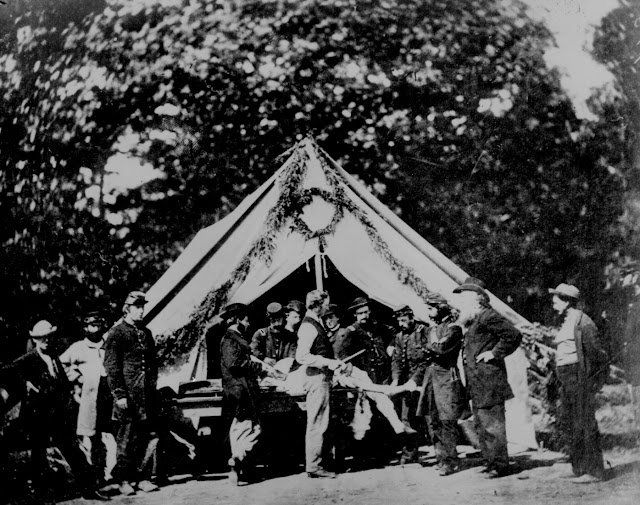 Below are the original words of Henry Wadsworth Longfellow's poem "Christmas Bells":

I heard the bells on Christmas Day
Their old, familiar carols play,
and wild and sweet the words repeat
Of peace on earth, good-will to men!

And thought how, as the day had come,
The belfries of all Christendom
Had rolled along the unbroken song
Of peace on earth, good-will to men!

Till ringing, singing on its way,
The world revolved from night to day,
A voice, a chime, a chant sublime
Of peace on earth, good-will to men!

Then from each black, accursed mouth
The cannon thundered in the South,
And with the sound the carols drowned
Of peace on earth, good-will to men!

It was as if an earthquake rent
The hearth-stones of a continent,
And made forlorn the households born
Of peace on earth, good-will to men!

Then pealed the bells more loud and deep:
"God is not dead, nor doth He sleep;
The Wrong shall fail, the Right prevail,
With peace on earth, good-will to men."

As most know, the Civil War was fought from 1861 to 1865, While the war itself would have been enough to give anyone at the time a feeling of hopelessness, the poet Henry Wadsworth Longfellow's second wife of 18 years died in 1861 after sustaining burns when her dress caught fire. That tragic accident took place on July 9th, 1861.


His first wife, Mary Potter Longfellow, died in 1835 after a miscarriage. His second wife Frances Appleton Longfellow's death came as an accident while supposedly putting locks of her children's hair into an envelope. She was attempting to seal the envelope with hot sealing wax as was the custom of the times. Her dress suddenly caught fire. Henry heard her screams and jumped off a sofa where he was taking a nap. He rushed to help her and immediately threw a rug over her to try to put out the flames.

Fanny, as she was known to all, was badly burned and was rendered unconscious during the ordeal. She was taken to her room while a doctor was sent for. It's said she drifted in and out of consciousness. At around 10am on the next morning, she awoke and asked for a cup of coffee. She then closed her eyes and died.

Henry burned his face and hands very badly while trying to save her. His burns were so bad that he wasn't able to attend her funeral a few days later. The burns to his face were so severe that he stopped shaving and he wore a beard from then on. Today, we know the poet's beard as a sort of trademark.

After her death, America's most popular poet of the times, a man who used some of the income from the sale of his poetry to discreetly buy slaves their freedom, Henry Wadsworth Longfellow stopped writing for years. Devastated by her death, it's said that he never ever fully recovered. It's even said that he resorted to using laudanum to help deal with his grief.

In March of 1863, Henry Longfellow receives a letter from his oldest son Charles. His letter states in part, "I feel it to be my first duty to do what I can for my country and I would willingly lay down my life for it if it would be of any good."

In 1863, Charles Longfellow joined the Union Army without his father's knowledge or blessings. During his service, he would be promoted to the rank of Lieutenant and become severely wounded. In 1864, his father traveled to a Union Army hospital in Washington D.C. to find his son. He then took Charles home. His wounds were serious enough to where that was the end of the war for Charles Longfellow.

In the winter of 1863, with the war raging and no solution for peace in sight, months before finding out that his son Charles was not dead, and still reeling from the death of his wife, despair fell over the great poet. It is then that he penned his poem "Christmas Bells."

Longfellow is believed to have written his poem on Christmas Day in 1863. Some say he was in such sorrow over the way the war was going, and the possible loss of his son, that his spirits were lifted when he himself heard the local church bells ring out. It's said that with hearing those bells, he felt as though God was reminding him that he has not abandoned him and all there.

His poem speaks to a Christian nation being overwhelmed by the roar of cannons and hate. It speaks to having despair, yet finding hope despite that gloom. His poem "Christmas Bells" was first published in February of 1865.

Christmas carols are inspirational, heart warming, and some songs can be absolutely fun and goofy as with "Grandma Got Ran Over By A Reindeer." Most spiritual Christmas carols speak to the miracle of the birth of our savior Jesus Christ. They speak to our faith as Christians.

As with all of us, I have my favorite Christmas songs. And depending on my mood, there are a few that I will still play into the ground just as I did when I was a kid with my 45s and small record player. Among my favorites is a relatively unknown carol called "I Heard the Bells on Christmas Day."

This carol actually comes from Longfellow's poem "Christmas Bells." Though it was written and published in the midst of the dark days of the Civil War, the poem was not set to music until 1872.

As Christmas songs go, this one never reached the Top Ten list. As a song, it was recorded in 1956 by singer Bing Crosby. And while many others including Harry Belafonte and Frank Sinatra have recorded the song, it is Bing Crosby's rendition that has met the test of time.

While Longfellow's poem "Christmas Bells" references the Civil War in his poem, including the lines "Then from each black, accursed mouth, the cannon thundered in the South. And with the sound, the carols drowned."

Those words don't appear in the song "I Heard the Bells on Christmas Day" as you can see for yourself below:

Joy to the world
Let earth receive her King

I heard the bells on Christmas day
Their old familiar carols play
And wide and sweet the words repeat
Of peace on earth, good will to man

I thought as now this day had come
The belfries of all Christendom
Had rung so long the unbroken song
Of peace on earth, good will to man

And in despair I bowed my head
There is no peace on earth I said,
"For hate is strong and mocks the song
Of peace on earth, good will to man."

Then pealed the bells more loud and deep
God is not dead nor does he sleep
The wrong shall fail, the right prevail
With peace on earth, good will to man

While peace and goodwill seem so rare, even in this day and age of conflicts and strife, that small Christmas carol speaks to our faith in God. Our faith that good will triumph over evil no matter how bad things appear because "God is not dead, nor does he sleep."

Tom Correa
Posted by Tom Correa at 1:58 AM 4 comments: