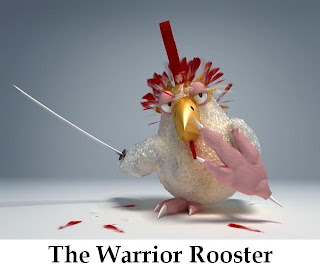 It's not enough that I pick on the Navy as much as I do when he’s around. No, now my neighbor has started calling one of his strange acting bantam roosters by the guy's name.

Then thinking about it, I really understood because that isn't the first rooster that my neighbor has named after one of the guys around this area. Both other times it seemed to be pretty accurate.

The first was an old rooster who lost his crow and couldn't do what roosters do, and before you knew it the rooster was named after a former Legion Commander.

The next was a scrawny looking pint size bantam rooster who thinks he's 6 foot 4 and about 240 pounds around the hens. My neighbor's family calls him the General after one of the guys who lives nearby. I've seen that rooster, and yes he acts just like him. It's too funny really.

As for this Navy rooster, well it's the only rooster that I've ever heard of that will sit a clutch of eggs. Usually once a rooster has fertilized the eggs then he has nothing more to do with the hatching other than his job of guarding the flock. A rooster will never brood a clutch of eggs.

And yes, after seeing that rooster, well I agree that it does act a lot like our Sailor friend. A little strange acting really! I can't help but wonder about a rooster that goes against nature! I knew that that's the way some Sailors are, and though our Sailor friend is a bit quirky he's certainly not a freak of nature. At least I don't think he is.

Now to some of the people at the American Legion some of this Navy bashing, which is nothing more than part of a 235 year old Navy verses Marine Corps rivalry, it must seem to border contempt. I actually enjoy watching some of the shocked looks as they hear the Navy attack and the Marine Corps counter and vice versa.

They must think we really don't like each other, which of course is just not the truth.

Yes, really, cross my heart, I have no contempt for the Navy! I have nothing but respect for all of our branches of Service including the Coast Guard who I'm not sure who they're under these days. The poor Coast Guard has never been a part of our military to my knowledge, and yet they have been well kinda sorta.

Why dod I say kinda sorta is because they are a military organization, yet they used to come under the Treasury Department. And now, I think they are under Homeland Security. But again, I'm not real sure.

That's OK, I'm sure one of the roosters around here would know. Heck the place is full of roosters really. Just ask the former Sailor who now has a rooster named after him, I'd bet he'd tell you!

He and I have talked about important things like the history of the Navy, the reason for ships bells, or why didn't he tell George Washington to sit down in the boat as he crossed the Delaware?

But don't think he doesn't dish it out. After all he comes back asking me if I was the Marine who told General MacArthur to say those immortal words that he shall return, or if I really was part of the Marine Security Detachment at the Last Supper?

So it's all fair.

And yes, I've shook my head in disbelief a few times when he tells one of his Sea Stories. And God knows I'm sure he's done the same a time or two listening to me, but when he said he had qualified Marines during their annual Rifle Qualification - and that he was the only Sailor in the entire Navy who was qualified to do so? Well I just couldn't beat that one!

And though after hearing his stories, yes I've actually wondered how the Navy has kept functioning after he retired. I've also concluded that his tales are pretty harmless, and hopefully he feels the same about mine.

But now that brings me to my concern lately. It’s about what kind of rooster will my neighbor pick to name after me? Will he be some robust hearty big beautiful specimen of rooster that would win prizes at the Calaveras County Fair?  Will he be some young hen chaser who knows his job?

Well I saw my neighbor a day or two ago, and while trying to be funny I asked him where’s the rooster that he’s going to name after me?

Oops, I thought. I knew this could be trouble.

The rule is, if the Sea Story is a tall tale, then you are never to start believing your own tall tales!

Well I remember answering, "No," and waiting for my Gunny's wisdom to come pouring forth. And yes, he didn't fail me.

He said, "Well a great Sea Story, or any War Story, should be like a Fishing Story. You keep the fish the same size, but you make the catching sound better!"

Now though I've never forgotten that rule or to try to keep the fish the same size, I understand how some of my Sea Stories can sound a bit far-fetched. True as they may be!

So wanting to know I finally asked, "OK, what kind of rooster would you have in mind for me? Maybe since I’m from Hawaii you want to find some feral rooster like those in Kauai? Maybe a great champion cock fighter?"

I stopped suggesting when he shook his head no.

Instead he said, "My wife and I picture a rooster with sword in hand, blind in one eye, and kicking butt, still an Old Warrior Rooster! Sort of what American Indians call a Walking Eagle!"

"Walking Eagle? No kidding?" I asked, although never hearing the term, it sounded pretty good. 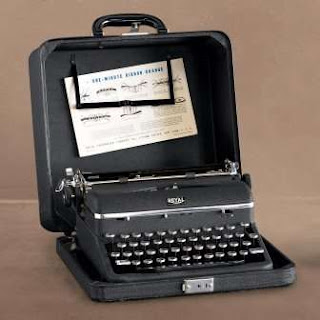