As a Constitutional Conservative, he has a common-sense approach to politics that many today can relate to. Below you will find a number of his political commentaries. His experience to repeal Tombstone City Ordinance Number 9 chronicles below as well.

To Pee Or Not To Pee

With Trump We At Least Have A Chance

Hollywood: City Of Propaganda And Hypocrites

Are We Truly Better Off?

Invasion By The So-Called Religion Of Peace

Professional Politicians and Media Don't Get It

Loyalty In The Work Place Is Gone

Islamic Group C.A.I.R Is A Sham

We Are At War

Not A Racist Flag

So You Want To Be A Cowboy

Radical Muslims And The Nazis

The Cowboy In The Center

Race Relations between Blacks and Whites

How Much Rifle Do You Need?

Is Hillary Clinton a Hypocrite and Liar?

Communists and the ACLU

Below is Terry McGahey's story about his battle for gun rights in Tombstone Arizona. It is a story of determination and being in the right. 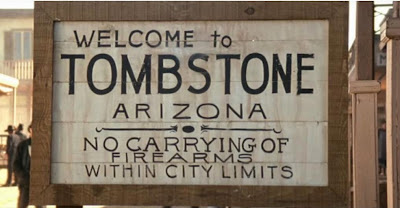 My Thanks to Terry McGahey

The Last Gun Fight -- The Death of Ordinance No 9