The gay Soldier who committed high crimes against the United States by disclosing the U.S.Army's most sensitive classified documents to a foreign company Wikileaks is being charged with an additional 22 charges, including aiding the enemy, which is equivalent to treason in the civilian world. 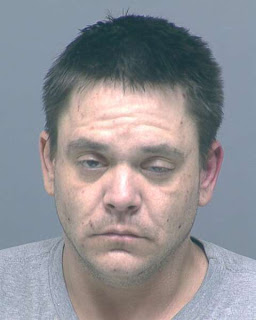 Pain and simple, it is a terrorist act!
For me, I have nothing against gay people. But then you might ask, if that's so then why mention that Manning is gay?

Because he is what he is, and what he is goes to why he committed the crimes that he did.

Fact is that Army Major Nidal Hasan shot those people in Fort Hood because he is Muslim. According to eye witness reports, Nidal had screamed "Allahu Akbar!" before he started shooting, the same as any other Muslim terrorist would do.

Bradley Manning leaked classified documents because he's gay. There is no question about it, Manning is gay. And according to all of the reports, there is agreement that the Clinton imposed military policy banning gays from serving openly was Manning's motive for leaking the classified documents.

Another report says that Manning's motives go to his gay partner being supposedly reprimanded somehow or another and he didn't like it.

But if all of the reports are wrong and it wasn't the act of a gay Soldier acting out his anger against a policy he didn't like, and since no moneys are involved, then maybe a friend of mine is right when he said that Manning sounds like a spoiled child that's angry because he hasn't got his way over something.

Either way, I agree it seems like an unbelievably small reason to sell out your country. I mean if someone out there were to sell us all out for any reason at all, then that really seems to be a pretty cheap price. Cheap indeed, all over Gay Pride.

It reminds me of the days when I was working in Corrections in the Marine Corps and how protective one gay male would become of his partner in the Correctional Facility. In those days we were trained to recognize it and be aware of it, but I only experienced it once.

I was with another Brig Chaser when we found two men in the midst of an unlawful act. One lunged at the other Chaser, while his partner cowarded away from us.  It took two of us to restrain the one. I believe both were later discharged from the Service.

But taking your Nation's most sensitive documents and allowing them to become public for the reason that he don't like some policy or that his gay partner might of gotten in trouble over something or other seems extreme.

Very extreme, if not psychologically screwed up. Maybe there should have been red flags regarding his mental instability?

With the Liberal Media and Democrats fighting so hard to have "Don't ask, Don't tell" lifted, it's no big surprise that the reasons for PFC Bradley Manning's treasonous activities hasn't been made an issue.

After all it would not help the Liberal or the Gay Agenda, if there were a Psychologist out there ready to testify that there may be something inherently psychologically wrong with a gay person like Manning.

Although I wouldn't put it pass his attorney to use the whole "we all know that gays are not as mentally stable as heterosexuals" as a defense. Who knows?

I mean really, who knows? I'm sure his attorneys are thinking of anyway they can to get him off, including a possible Presidential Pardon if they and their liberal supporters would have their way about things.

PFC Manning improperly obtained secret information, including classified State Department cables and video footage of a July 2007 Military Operation, while he was stationed at a base east of Baghdad, Iraq.
Manning was exposed after telling notorious online hacker, Adrian Lamo, he was the one who released the video of the 2007 military operation. Lamo shared this knowledge with authorities, later saying Manning also took credit for releasing hundreds of thousands of sensitive diplomatic cables.

Other charges announced on Wednesday includes wrongfully causing intelligence to be published on the Internet knowing that it will be accessed by the enemy, theft of public property or records, transmitting Defense information, and fraud in connection with computers. Sounds like terrorism to me!

Trial proceedings against Manning have been on hold since last July, pending the results of a medical inquiry into Manning's mental capacity and responsibility. If that inquiry determines that he is mentally fit to be tried, the military equivalent of grand jury proceeding may be held.

If someone would ask me what I think, I'd have to say that I think his mental capacity is shot!

Why? Well why in all that's right would you join the military knowing full well that you are gay and there is a policy in effect that says that gays can't serve openly. Then once you're in, you attack the very thing you took an oath to serve and protect because you're upset over the very policy that you knew full well was in effect before you ever enlisted.

It's called irrational behavior! I mean think about it, it makes no sense. And if it's not irrational behavior, then it's no big deal because either way he's just a Traitor! If it was stupidity on his part than he is a Stupid Taitor, and if it was crazed behavior then he's just a Crazy Traitor. Either way, his crimes speak for themselves.

The Army said Manning was notified in person of the additional charges on Wednesday while being confined in the Marine Corps Base Quantico Brig in Quantico, Va.

In fact, Manning has a lot of big time money coming in as donations to his defense fund. No kidding, there is an anti-war group called "Courage to Resist" which has established a "Bradley Manning Defense Fund."

And then there is the Bradley Manning Defense Fund which is tax-deductible! No kidding!

These folks at “Courage to Resist” state that the 23 year old Soldier has a legal trust account as well. Imagine that, there is a Defense Fund and a Legal Trust Account for Manning.

That's right. Imagine the situation here, you commit treason but you have friends that raise funds in your name and they are not considered co-conspirators. No, instead they are legally able to write off their donations on their taxes.

Well yes, that surprised me. But that wasn't the last thing to surprise me in this situation, no it wasn't. The last thing that I expected to learn is that if someone out there wanted to donate to this guy, so that he can get off for the harm that he has done to our country, then their checks will be deposited to a Bank of America account.

That's right, Bank of America. I find this all incredible!

An openly gay U.S. Army Soldier disagrees with a policy from Washington D.C., and sells out his country not for money but out of anger.  Then an ultra-liberal leftist organization comes in to set up support for this Soldier who has openly admitted to committing treason. The organization who supports him is a self-proclaimed anti-American anti-War group who has ties to Code Pink and other anti-War groups who help gays, draft dodgers and deserters.

As for the anti-War group, well they have the Soldier's donations in an account at Bank of America in Massachusetts.  Considering the group is located in Oakland, CA, it's strange that they would pick Bank of America in Massachusetts. But then again one of the stranger parts of this story is that instead of it being a couple of hundred thousand dollars, it should only be a few coins in some shoebox on a shelf that no one should give a shit about.

I've had to realize more and more lately that, even if I don't want to, I just have to admit that certain things in life are just true.

And one of those things that I have learned actually since the Clinton Administration is that for a bunch of Socialist who hate American Capitalism, the wealthy Liberal Left is always willing to support any and all anti-American behavior with their wallets.

Don't ask me why, they just do. The first American Gay Terrorist included! 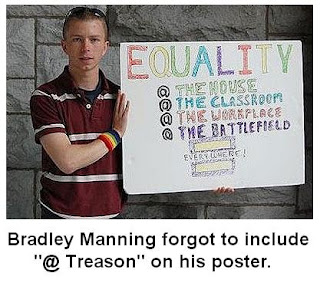