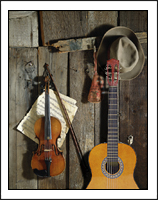 Among the wineries in the old gold rush town of Murphys, California, population 2,000, is the beautiful Ironstone Vineyards.
On the way to the winery, you might find it interesting that a dirt road leads you to it when coming in off of Highway 4.

If you come in from the town side of Murphys, you'll find neighbors out watching the parade of cars driving through their tiny streets heading out to Ironstone.  Some will wave while others will just shake their heads at all the traffic.
Cattle ranches everywhere, right next door to Ironstone is a rancher who breeds what I was told are some prize winning Polled Hereford Bulls.  Actually there are a few great ranches surrounding Ironstone.
Now as for the attractions at Ironstone, besides it's great wines, the winery also has the historic Alhambra Theatre pipe organ, and it has deep caverns which hold its many beautiful auburn colored wine barrels.

The winery also has huge beautiful gardens, and all sorts of historic gold mining equipment from back when the town of Murphys was just a mining camp.  And yes, the Ironstone Winery also has its Heritage Museum - where the largest Crystalline Gold Leaf specimen in the World sits for the public to see.
Of course, there's also the Ironstone Amphitheater. Its very large and surrounded by tree and rolling hills.  Well cared for, its just a beautiful outdoor setting that holds more than 7,000 guests. And by the way, the Ironstone Amphitheater usually has big-name world-class performers there.
In fact just last week Friday, on August 26, 2011, my wife and I, along with her parents, all went down to Murphys to see Alan Jackson perform there. We stopped off in Angles Camp for pizza before the concert, then made our way through the tiny town to Ironstone.  We were hoping to get there early.
I was going to put this in another blog, but I can do it now. And since I've never done a review before, I figure I'll just keep this short. 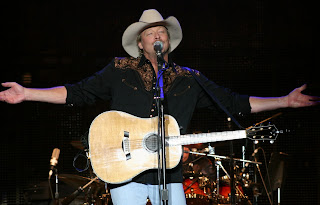 Since I wrote an article about why I don't like the Country Music that I hear on the radio these day, I'm sure someone will write and ask why I went to see Alan Jackson.
It's because he can sing! It really is as simple as that.
He has a great voice that people love. He has a great way about him.  Yes, he has style.  He is a class act. In fact, he did something that a lot of us who live up here in rural America love - Alan Jackson said he loved our area and felt right at home "out in the country."

And yes, besides a trip down memory lane, he was on top of his game that night.  There were the songs like "Where Were You When the World Stopped Turning" and "Remember When" and "Drive" that had folks in tears.  And yes, I'm so grateful that he doesn't let the sound of his band drown out his great voice.
His songs run the range of being vibrant and uplifting, as well as soulful and touching.  He sang some new stuff, but he also sang some old stuff.  And honestly, he was outstanding to listen to and watch.
After I told someone that I absolutely loved his performance, he replied that it sounded as though I was thoroughly impressed by him.
Well, yes I am! I'm definitely impressed by Alan Jackson.

He appears to be a good man with his priorities straight in life.  He has his family, which he loves, and that's obvious to everyone there that night by the ways he talks about his wife and children.  And yes, it was great to see his children included his video that accompanied his song "Drive" while it played on a big screen.
He has his work, and from where I sat, he looked like he was enjoying himself as well.  He delivers a great product while liking his audience, and that my friends definitely comes across when he took the stage.
His show has no fireworks and smoke, no tons of white noise coming out of the stage that detracts from his voice. He has a nice voice. Dear God, can he sing!

Basically friends, it was one of the best concerts that I have ever been to.
I'm so glad that his voice wasn't lost in blaring noise that some bands try to pass off as music these days. Where Alan Jackson was great, fact is that his opening act wasn't.

His name is Shooter Jennings.

On stage he looked a lot like a long haired Charles Manson with a guitar.  I guess, he's into a sort of drugger look.

It was evident from the start that he apparently likes hard rock and roll - because he played a lot of it.  And yes, it was loud! 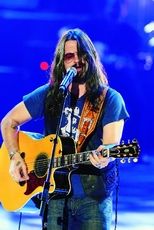 Heck, maybe he's another one of the many Heavy Metal musicians who have now decided to come over to Country Music because no one listens to Heavy Metal anymore.
Who knows? But I can tell you this, when I hear young people in the audience yelling for him to stop playing his electric guitar "riffs" - that has to tell you something.

The ear splitting crap ain't worth a damn, and I just don't understand why people think that that is Country Music - when it ain't!
And by the way, what is this whole thing about putting your back to your audience and focusing on playing with his band?  One young gal said that he was more focused on "jam'n" with his band than he was entertaining his audience.  She was probably right.
He was too loud and really put on a pretty bad performance until his last four songs when he dropped the Heavy Metal crap.  But by then, it was too late.
I hope I never go to one of Shooter Jenny's stage performances again - he is just that bad.
And yes, I feel completely opposite about going to another Alan Jackson concert.  Friends, I'd go see Alan Jackson perform anytime.  And I'd recommend that you do to if you ever get the chance - he is just that great.
Story by Tom Correa
Posted by Tom Correa at 4:05 AM No comments: