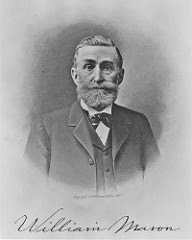 Every once in a while, I'll find someone who really needs to be talked about. And as my regular readers already know, I talk a lot about the real Old West and those who have contributed significantly to our history. And yes, as most of you know, I like talking about people who are not very well known. Yes, the unsung heroes, lawmen, great inventors, the pioneers who have taken a back seat to the more glamorized individuals made famous in Dime Novels, and later Hollywood.

As for great American gunsmiths and inventors, most folks know the story behind the partnership of Smith & Wesson and the genius of John Moses Browning. And of course, most know about Samuel Colt and how, in 1836, he patented the first revolver mechanism that led to the widespread use of revolvers.

Most know the story about how Colt came up with the idea for the revolver while at sea. Most know how he was inspired by the capstan, which had a ratchet and pawl mechanism on it, a version of which was used in his guns to rotate the cylinder. And of course, we know of his great design which is the 1873 Colt Single Action Army.

But wait, Samuel Colt died on January 10th, 1862. So how did he invent the 1873 Colt Peacemaker? Well, he didn't. That distinction goes to the man that I want to talk about here. Yes, the man that I'm about to talk about actually created some of the most iconic guns and firearm innovations in the history of firearms. Yet very sadly, he's almost completely unknown.


So who was William Mason, you ask?

Well, he was a pattern-maker, a mechanical engineer, in fact one of the founding members of the American Society of Mechanical Engineers. He was a gunsmith, a gun designer, a machinist. He was an inventor who worked for Remington Arms, Colt’s Patent Fire Arms Manufacturing Company, and Winchester Repeating Arms Company throughout the mid to late 1800s and the very early days of the 20th century. 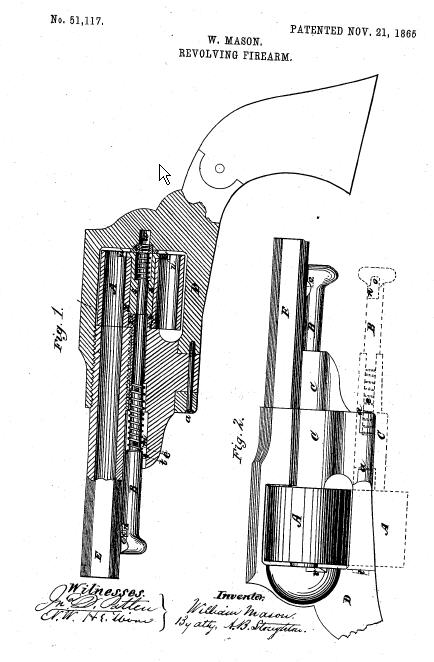 While at Remington Arms, he received U.S. patent 51,117, on November 21st, 1865. This was the patent for a swing-out cylinder used today for easy loading and the star ejector mechanism to eject spent cartridge cases in revolvers.

As most of us know, the most modern method of loading and unloading a revolver is by means of the swing out cylinder. So if you've ever wondered who designed and patented the swing-out cylinder and the star ejector mechanism that we all use to eject spent cartridge cases from modern revolvers, that inventor was William Mason. 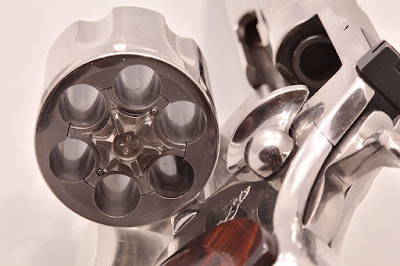 In 1866, he left Remington Arms to work for Colt as the Superintendent of their armory. As I stated before. Samuel Colt died on January 10th, 1862. So yes, it had been over four years by the time William Mason went to work for Colt’s Patent Fire Arms Manufacturing Company. And with his talents and genius, Colt Manufacturing Company would reap the rewards of hiring William Mason.

In fact, among other great innovations, because of William Mason, Colt Manufacturing Company would be the first firearms manufacturer to produce a revolver with a swing-out cylinder. That pistol was the 1889 Colt which we will talk about later.

It's said that because Colt was legally bound by the Rollin White patent #12,648 of, April 3, 1855, and not wanting to pay a royalty fee to Smith & Wesson, Colt could not begin development of bored-through revolver cylinders for metallic cartridge use until April 4, 1869. But once the Rollin White patent expired, along with gunsmith Charles Brinckerhoff Richards, William Mason patented designs to convert percussion revolvers into rear-loading metallic cartridge revolvers. Those converted revolvers are identified as the "Richards-Mason conversion".

The conversion of percussion revolvers to fire self-contained metallic cartridges was taking place before the Civil War, 1861 to 1865. Then because troops discovered the advantages of the cartridge over loose powder and ball or paper cartridges, the development of centerfire ammunition really took off after the war.

At the time the concept of a metallic cartridge became widely accepted simply because of their reliability in all types of weather, they could be carried without having to worry about the integrity of the cartridge, and of course the ease and speed of reloading compared to loose powder, loose balls, and paper cartridges.

In the early days of westward expansion, you needed your pistol or rifle or shotgun to fire when you needed it to fire. Many a pioneer reported damp powder, and hard to find balls. And yes, paper cartridges were fragile and rough handling left you with a ball and powder in the bottom of your cartridge box!

After working on these conversions, Mason began work on Colt's first metallic cartridge revolvers in 1871. The Colt Model 1871-72 "Open Top" revolver was the third such pistol, following the .41 caliber House Pistol and the .22 caliber seven-shot Open Top.

The Open Top .44 was a completely new design and the parts would not interchange with the older percussion pistols. Mason moved the rear sight to the rear of the barrel as opposed to the hammer or the breechblock of the earlier efforts.

The caliber was .44 Henry and it was submitted to the US Army for testing in 1872. The Army rejected the pistol. But they stated that they would accept a resubmitted pistol with a more powerful caliber in a stronger frame.

For the redesign of what would become the 1873 Colt Single Action Army, Colt turned to its best two engineers -- William Mason and Charles Brinckerhoff Richards. Colt knew both had made valuable contributions to the company by developing a number of revolvers and black powder conversions.

Tasked with the demand for more knockdown power and a more robust frame, Charles Richards worked on a new cartridge while William Mason redesigned the frame to incorporate a top strap which was already in use by Remington and other gun makers on their revolvers. Mason also placed the rear sight on the rear of the frame.

While the first prototype was chambered in .44 rimfire, the revised version utilized the newly designed caliber known as the .45 Colt. At the time, the .45 Colt cartridge was, as is today, a centerfire design. But the original .45 Colt cartridge contained charges of up to 40 grains of black powder and a 255-grain blunt round nosed bullet.  Yes, there you have the knockdown power which has became legendary.

The result of Mason and Richards' work was a revolver that was chosen by the Army in 1872. The first order was shipped in the summer of 1873. The first order was for 8000 revolvers. Yes, with that the legendary 1873 Colt Single Action Army revolver, also known as the Colt Peacemaker, was born. 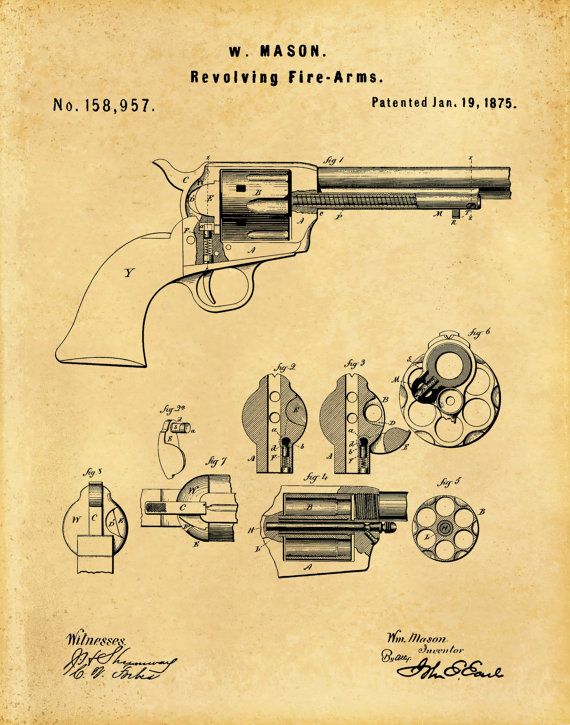 As for a bit of trivia, though thought lost after its production, 1873 Colt Single Action Army with the Serial Number 1 was found in a barn in Nashua, New Hampshire in the early 1900s. And though the Colt Colt Single Action Army has been offered in over 30 different calibers and various barrel lengths over the years, the pistol with Serial Number 1 was chambered in .45 Colt.

The Colt Single Action Army revolver, along with the 1870 and 1875 Smith & Wesson Model 3 "Schofield" revolver, replaced the Colt 1860 Army Percussion revolver. While it's said that the Colt quickly gained favor over the S&W and remained the primary US military sidearm until 1892, that was due to the anemic round of the S7W Model 3. Fact is, those issued the Model 3 preferred the loading and unloading of the Model 3 over the Colt Single Action Army.

After the success of the Colt Single Action Army and Colt's conversion of existing percussion revolvers to Richards-Mason conversions, William Mason went on to design Colt's smallest revolvers "The New Line" in 1874.

There were 5 variants of Colt's smallest revolver "The New Line" of 1874, each differed in size and caliber, but all using a breechblock designed by Mason. And yes, to answer the question if this was Colt's attempt to get into the pocket pistol business dominated by Smith & Wesson and others? Yes it was.

While it is said that Colt had first developed the concept of a "double-action" revolver as early as 1857 and a patent was filed, it was never built by Colt. Fact is, double-action revolvers were being made in Europe for many years before Colt patented his concept of a double-action.

Some want to give credit to British gun maker Robert Adams for his 1851 double-action design. Robert Adams, who was a manager for a London based gun manufacturer called George & John Deane, invented a revolver where pulling the trigger cocked the hammer, rotated the chamber and then released the hammer, all with a single trigger pull. His double-action pistol was a cap and ball percussion revolver.

While percussion caps were developed in the 1820s, pinfire metallic cartridges were invented by French gun maker Casimir Lefaucheux in the 1830s. And while I hate disputing history books, I was recently introduced to a double-action revolver that pre-dates the 1851 Adams double-action pistol.

As for Colt, by the mid-1870s, they were feeling increased competition from their British rival, Webley & Scott. So Colt had Mason design a double-action revolver for them in 1877.

That pistol became the Colt M1877 double-action pistol. The Colt M1877 was manufactured by Colt's Patent Fire Arms from January 1877 to 1909 for a total of 166,849 revolvers. The Model 1877 was offered in three calibers, which lent them three unofficial names, the "Lightning", the "Thunderer", and the "Rainmaker".

The biggest difference between the models was the caliber of the cartridge which they were chambered for. The "Lightning" was chambered in .38 Long Colt. The "Thunderer" was chambered in .41 Colt. Both models had a six-round capacity. The "Rainmaker" was offered in .32 Colt. 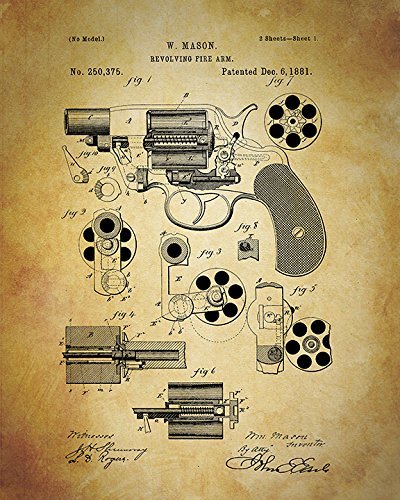 Following this, William Mason again teamed up with Richards to produce a larger framed version of the Colt Lightning, the Colt Model 1878 Frontier. And while some may think he only worked on revolvers, he is also responsible for designing a hammerless double-barrel shotgun for Colt.

In fact, Colt introduced a hammerless double-barrel shotgun designed by William Mason, and covered by a number of his patents in 1881 and 1882. Besides the internal hammers, his design also incorporated double triggers and a sliding thumb safety on the tang.

His design can be found in the Colt Model 1883 double hammerless shotguns. And yes, the Model 1883 Shotgun was one of Colt's finest products and was produced.

Below is a Colt ad introducing their hammerless double. 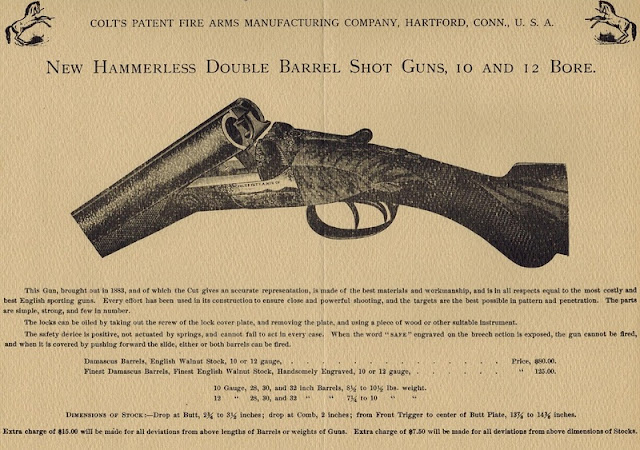 William Mason's final design for Colt was the Colt Model 1889. Even though Mason left Colt in 1882, his collaboration with Carl J. Ehbets for a revolver with a swing-out cylinder ended up with the M1889 being produced 7 years after Mason left Colt to go to work for Winchester.

When Mason went to work for the Winchester Repeating Arms Company in 1882. And while he was originally hired to design a revolver to compete with Colt's revolvers, Mason eventually made working prototypes of many of John Moses Browning's designs.

The Winchester Model 1886 was a lever-action rifle designed by John Browning to handle some of the more powerful cartridges of the period. William Mason was assigned to the Model 1886 and is said that he contributed to it by making some improvements to Browning's original design.

A year earlier, in 1885, he became the Master Mechanic at Winchester and held that position until his death in 1913.

William Mason was an inaugural member of the American Society of Mechanical Engineers. And while we celebrate American gun makers like Colt and Browning, Smith & Wesson, over the course of his life William Mason patented 125 inventions for firearms, ammunition, firearm manufacturing machinery, steam pumps and power looms.

Winchester historian Mary Jo Ignoffo called William Mason, "one of the most significant designers of the nineteenth century". Yet sadly, he is largely unknown for his contribution to America's firearms industry.

For his lifetime of work, for his 125 inventions, for giving to America some of our nation's most iconic firearms, I salute him!