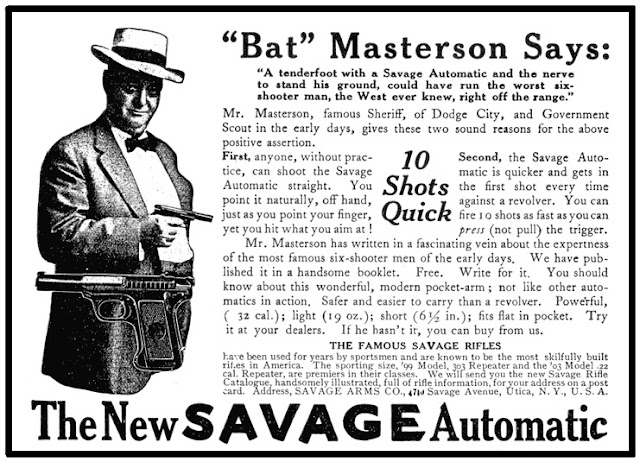 In Bat Masterson -- Let's Answer Your Questions -- Part One, we looked at a number of things about Bat including where he was born, the year of his birth, if he worked for Wyatt Earp or not, and his requirements for a new Colt Single Action Army. Yes, a Colt Peacemaker. And of course, we looked at how he got the moniker "Bat."

In this Part Two, I'll try to answer a few more questions that you've had for me pertaining to my research into Bat Masterson. And again, let's start with the easiest one first.

For all of us who grew up on the old Western television series at the time, we believed it all. Or at least many of us did especially if we were kids at the time. And frankly, looking back on those TV Westerns, I really wouldn't have had it any other way.

Back then the bad guys always got exactly what was coming to them in the end, and the good guy always got the girl or the reward or both while saving the day. Today things are all backward. And frankly, I sort of feel sorry for kids being brought up in the pessimistic world we live in today.

As for Bat Masterson the TV show, the show was a "fictionalized" account of the life of Masterson. The title character was played by Gene Barry and the half-hour black-and-white shows ran from 1958 to 1961 on NBC. Supposedly the series was based "loosely" on Richard O'Connor's 1957 biography of Masterson, but who really knows what the scriptwriters used as information.

In the show, the fictional Bat Masterson shot a lot of outlaws. In real life, he didn't. On the show, he rode a number of horses. In real-life, Bat is quoted as saying he hated riding horses.

Was Bat Masterson "a legend in his own time"?

Fact is, unlike Wyatt Earp who was not a "legend" until after his death in 1929, and was in fact made into an Old West "legend" by Hollywood writers who re-wrote his history for movies and television, Bat Masterson was truly a legend in his own time.

And while Wyatt Earp actually thought that he was better known than they really were back in the day, that wasn't the case for Masterson. As with Wild Bill Hickok, Kit Carson, Buffalo Bill, and a few others, Masterson was very well known in his time.

Yes, he did. In fact, because Thompson was known as a fast gun, he was hired by then lawman Bat Masterson as an agent for the Kansas Atchison, Topeka, and Santa Fe Railway in 1879.

So how many times did Bat Masterson really use a gun against someone?

From what I have been able to determine, minus the speculation that he was involved here and there in this incident and that, the ifs and maybes, not that many at all versus others at the time.

Fact is, other than his taking part in the legendary fight for survival at the Second Battle of Adobe Walls, I believe Bat Masterson only used a firearm against men on only four occasions. During those four incidents, he killed one man, shot the horse of a rowdy cowboy, hit a fleeing murder suspect in the shoulder, and nicked someone by accident:
(1) In January 1876, he shot and killed Corporal Melvin King at Sweetwater, Texas. That took place after King killed a woman and shot Bat in the groin.

(2) As lawmen in Dodge City, Bat and his older brother Ed fired shots at a rampaging cowboy named A. C. Jackson. It is believed that Ed missed but Bat succeeded in killing his horse. Supposedly, Jackson was unhurt.

(3) In October of 1878, James Kenedy was a fugitive wanted for the murder of a Dora Hand in Dodge City. He was pursued by a posse led by then County Sheriff Bat Masterson. Kenedy was soon brought down by a bullet from Bat's rifle and captured. Kenedy was hit in the shoulder.
(4) Some are certainly going to write to say that Bat Masterson used a pistol at the shootout that became known as the "Battle of the Plaza" in 1881.

That incident took place in Dodge City near the train depot, after responding to a telegram that stated his younger brother James was in danger. James was having trouble with his business partner, A.J. Peacock, over the hiring of Peacock's brother-in-law, Al Updegraph, as a bartender.

Someone wired Bat who was in Tombstone that his brother's life was in danger. Bat dropped everything and returned to Dodge on April 16th.

As soon as Bat Masterson stepped off the train, he saw Peacock and Updegraph near the station. While it is unknown who started shooting at who, an exchange of gunfire starts up right then and there.

Bat Masterson retreats to the railroad track’s three-foot berm for cover behind it. Soon enough, Bat is being shot at from a few of Dodge City's south-side saloons. About then James Masterson and his friends returned fire from the north side of the tracks.

Al Updegraff is hit and the bullet rips through his chest. A bystander is also hit. Not long after that, both Bat and Peacock run out of bullets. About that time, during the lull in the action, Mayor A.B. Webster runs up and sticks a shotgun in Bat's face demanding that he surrender. Bat surrenders and hands over his empty six-gun to the Mayor.

A hearing was held, and formal charges were brought against Bat Masterson. The complaint stated that "W.B. Masterson did unlawfully, feloniously, discharge a pistol upon the streets of said city."

Since no one was "mortally wounded", no serious charges were imposed against Bat Masterson. He was actually fined $8 for "discharging a firearm within city limits". And yes, Bat and his brother James were escorted under armed guards to the train depot and put on the train out of Dodge City that evening.

It's true. after Bat Masterson pleaded guilty and was fined $8, James Masterson dissolved his partnership with A.J. Peacock. Then both brothers were escorted to the train depot and put on a train out of town that evening.

An article in the Ford County Globe claimed "the Mastersons were allowed to leave town, with the understanding that they were not to return."

(5) In April of 1897, Bat Masterson accidentally shot a man named C. C. Louderbaugh during a polling place altercation in Denver. That incident took place in Denver on April 6th, 1897, when he was serving as a deputy sheriff of Arapahoe County. Masterson got into an election day dispute with a man named Tim Connors. Masterson drew his pistol and Connors attempted to seize it. During the scuffle, the gun went off and a man named C.C. Louderbaugh was shot in the left wrist.

In another article I wrote about how writers have stretched the truth forever. They like sensationalizing people and events to where even those who they write about can't believe what they're reading. And yes, some so-called "Historians" out there are no real help in ferreting out the truth of what really took place. Many simply regurgitate what others have written, and really never question the validity of the story they are presenting to the public.

My favorite example of this is the whole fraud regarding John Wesley Hardin claiming that he outdrew Wild Bill Hickok and living to brag about it.

The first time that I had questions about that ever taking place was 35 years ago when I was in college studying to get into law enforcement. Since then, I've read a number of accounts of this. I've looked for any and all evidence and there isn't any credible evidence to proof it ever happened.

The reason there is no credible evidence is because there were no witnesses, not ever a word by Hickok that such a thing ever happened, no evidence at all that it ever took place.

So really, as a teacher once asked our class which was studying gathering evidence, why should anyone believe any statement or statements coming from Hardin knowing he was a psychopathic killer? Why since he was not exactly a great source if one is looking for the truth?

And while Bat Masterson became more widely known for his participating in the Second Battle of Adobe Walls, his fame as a gunman really came as a result of Dime Novelist writing the exploits of Bat Masterson that never took place. And yes, his fame as a stone cold killer was the result of a practical joke played on a gullible newspaper reporter in August 1881.

The story behind that took place when a young newspaper reporter in Gunnison, Colorado, was looking for a sensational story. The story goes that the young reporter asked Dr W.S. Cockrell about "mankillers."

Supposedly Dr. Cockrell pointed at a young man and said he was Bat Masterson. He said that he had killed 26 men. Dr. Cockrell then went on to fill the young reporter's head with several tales about Bat's exploits. Of course never did that reporter ask for any sort of proof or evidence. But the truth didn't matter, and reporter simply wrote the stories he'd just heard. All published in the New York Sun.

As they say today, those stories went "viral". They were widely reprinted in papers all over the country. They were copied and expounded upon by Dime Novelist and magazines. And soon enough, it is said that Dr. Cockrell felt that he needed to apologize to Bat for perpetrating such a hoax at his expense.