The Yreka Necktie Party of 1895 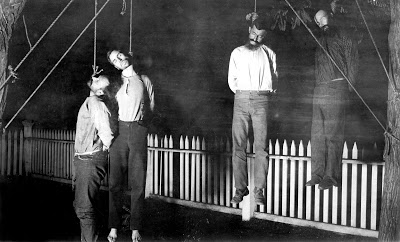 On August 26th, 1895, a vigilante group of about 250 men gathered for the purpose of issuing justice to four men who were in the county jail. All four were accused of murder. The evidence pointing to their guilt was said to be overwhelming in each case.

It was a lynching as no one there had ever seen before. The vigilantes gathered were said to be from various parts of Siskiyou County. And so secret were the plans, that the 250 men organized under the nose of the city and county law in Yreka. In fact, it is said that the law there received absolutely no warning whatsoever before it took place.

It started just before midnight when the vigilantes carried an old rail from the Yreka depot to the northwest corner of the courthouse square. Once there, they placed it in the forks of two trees. About the same time that was happening, a fight was staged as a diversion to get the city marshal away from the jail. The ruse worked.

Once they were able to send the city marshal on a wild goose chase, the vigilantes entered the jail. They then broke the padlocks off the cells, and rushed the prisoners. They then hauled the screaming prisoners to the square where they strung them up in no time at all. It was actually all very quick.

Californians Have an Old-Time Necktie Party and Four Criminals Wear the Neckties.

The '49ers Did the Work Deliberately and With Precision on a 19-Year-Old Boy.

Murderers Taken from Cells and Hanged High by a Tax Paying Mob.

Yreka, Cal., Aug. 26.—Four murderers were taken from the county jail by a mob of 250 men at 1 o'clock this morning and lynched.

A band of citizens, fearing that the law would not be carried out, and angered by the atrocity of recent crimes, determined to take the matter into their own hands. The lynching was the ghastly climax to the reign of lawlessness which has prevailed in Siskiyou county for some months past.

One of the victims was Lawrence Johnson, who, on the evening of July 28, stabbed his wife to death in the town of Etna. Another was William Null, who shot Henry Hayter in the back with a rifle near Callahan's on April 21. Louis Moreno and Garland Seemler, who are supposed to have killed George Sears and Casper Meierhans at Bailey Hill on August 5, were also hanged.

At 11 o'clock farmers from all surrounding country began to drive into town, and by midnight the mob was ready to march to the county jail. Before taking a step, however, every precaution was taken to prevent the plans of the lynchers from being frustrated by the officers of the law. The sheriff and one of his deputies were decoyed to another part of town by two members of the mob, who were engaged in a sham fight, and the fire bell was muffled to prevent an alarm being given in that way.

When the jail was reached a number of the men, all of whom were masked, awakened Under Sheriff Radford and demanded the keys from him. He positively refused to open the door or give the keys up, telling them that if the[y] broke open the doors he would blow their brains out. Finding that Radford was determined not to give them the keys, they went across to the jail and got on top of a stone wall which surrounded the jail.

Deputy Sheriff Henry Brahtlacht, who had been sleeping in the jail, fired two shots out of the window to alarm City Marshal Parks and Deputy Sheriff Radford. He then opened the doors and was immediately held up by the mob, who took the keys from him and entered the jail.

Having no keys to the different cells, they were compelled to burst the locks with a sledge hammer, which they proceeded to do at once.

Lawrence Johnson, who brutally stabbed his wife to death at Etna on Sunday of July 28, was the first to receive the attention of the mob. They broke the lock from the door of his cell and placing a rope around his neck, led him out of the jail and across the street to where an iron rail was laid between the forks of two locust trees. Johnson pleaded for mercy, but the silent gathering gave no heed to his appeals, and he was quickly strung up, dying from strangulation in a few minutes.

The mob returned to the jail and then broke into the cell of William Null, who shot Henry Hayter at Callahan's on April 21, in a dispute over a mining property. Null desired to make a statement, but time was too valuable to allow of such preliminaries, and he was soon hanging alongside of Johnson.

Louis Moreno, who is charged with having killed George Sears on the 5th of this month, was taken from his cell and soon swinging with Johnson and Null.

The last and youngest of the four murderers to pay the penalty of his crime was Garland Seemler, aged about 19, who, in company with Moreno, was charged with having killed Casper M[e]ierhans at Bailey Hill, on the 5th of this month.

A rope was placed around Seemler's neck and he was led from the jail in his bare feet. He begged for mercy and his last words were: "Tell my dear old mother I am innocent of the crime."

About this time Sheriff Hobbs, having been notified, arrived on the scene, and commanded the mob to halt and the command being emphacized [sic] by a display of revolvers. He was told that the "job had been done." By this time the greater part of the mob had dispersed, leaving only about thirty or forty men on guard, who soon left after the sheriff arrived.

The bodies were taken down by Coroner Shofield and Marshal Parks, who removed them in a wagon to an engine house where they were laid side by side. The coroner has summoned a jury to hold an inquest.

Yreka is a little mining town, and years ago was frequently the scene of mob violence. The summary manner in which justice was meeted [sic] out to the four murderers this morning reminded the pioneers of similar scenes during the gold excitement forty years ago, when it was not an uncommon spectacle to awaken in the morning and see the body of a notorious criminal dangling from a tree.

Now for the rest of the story. On December 1st, 1895, The San Francisco Call printed a letter which they say came someone who knew who was one of the "real" murderers.


The article made the unsubstantiated claim that a cellmate of one of the accused knew about who really did one of the murders. Of course the problem with that was that the letter which The San Francisco Call cited was written by a "John Doe". And to make things appear even shakier, the individual interview by the paper was a burglar who said that he was told the story second-hand.


Facts Tend to Prove That Innocent Men Were Lynched.

STORY OF A BURGLAR.

A Cellmate of Moreno Bears Out the Confession of "John Doe."

LETTERS IN A STRANGE HAND.

The Mexican Had a Companion Who Probably Committed the Murders.

In their article, The San Francisco Call claimed:

"The recent publication of a letter from Arizona, signed John Doe, in which the writer confesses to the murders for which Moreno and Semlar were lynched in Yreka last August, has created a ripple of excitement here because of a corroborative statement made by a young burglar, Andrew A. Crawford, in a newspaper interview on the 27th of last September."

The San Francisco Call ended that article with the "young burglar" stating his theory of what took place, saying:

"My theory is that the writer of the letters accompanied Moreno to Yreka, and that he alone was guilty of the double murder for which Moreno and Semler were hanged."

Friends, when someone says they have a theory, that means that they really don't know but are only speculating. But frankly, that was all that The San Francisco Call needed to sensationalize the story.

So now, you're probably asking yourself, why would a newspaper, even back then, print what amounts to hearsay? Why would they state that they have the "facts" when they didn't? And no, they didn't have facts to substantiate their claim that the murderers were hanged in error?

Well it was not unusual for newspapers at the time to sensationalize stories.
They did it to sell papers and make money. It was called "Yellow Journalism" and it was widespread in the 1800s. Some say it is still around today, but we call it "Fake News."

The term "Yellow Journalism" was coined in the mid-1890s to characterize the sensational journalism technique of actually using yellow ink in their papers. It was a very common practise in the circulation war between Joseph Pulitzer's newspaper the New York World and William Randolph Hearst's New York Journal. Both papers were accused by critics of sensationalizing the news in order to drive up circulation. And no, "Yellow Journalism" of sensationalizing stories was not limited to just those two papers. It was very common.

As for the hanging that night in Yreka, California, by a group of vigilantes?

Well, justice was swift and the vigilantes saw it as their duty to do what they believed the justice system would not. It is said that no man there wanted to see any of them walk the streets as free man due to clemency, a reduced sentence, or parole.

No, the vigilantes paid no heed to the cries for mercy from murderers Lawrence Johnson, William Null, Louis Moreno, and Garland Semler as they lynched them that night. The vigilantes were there on a mission to do justice where the system was seen as failing.

It was said later that after the quadruple lynching not a single murder occurred in Siskiyou County for decades to follow. Imagine that.

Posted by Tom Correa at 3:48 AM No comments: