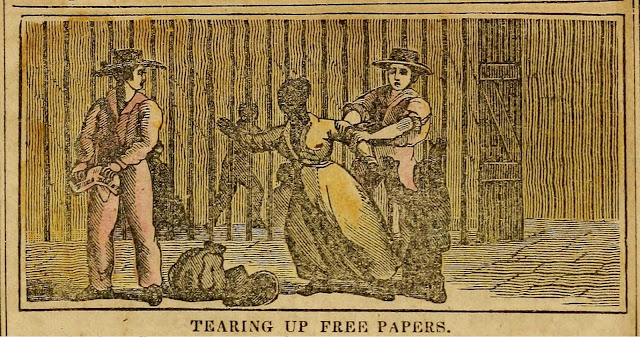 Have you ever heard of the "Reverse Underground Railroad" of the 1800's? If not, well I hope you find this as fascinating as I do.

Those in favor of abolishing slavery in America were called "abolitionists." The reason that I mention that is that not every Yankee was an abolitionist. No, not everyone on the other end of the Underground Railroad was a friend to slaves making their way to freedom.

While folks today have a tendency of focusing on what Southerners did regarding slavery, there are those who are either ignorant or simply want to dismiss what Northerners did during slavery. One thing was the Reverse Underground Railroad which operated for about 85 years up until 1865. Yes, even until the last year of the Civil War.

The term itself "Reverse Underground Railroad" is said to have came about because of the Yankee practice of kidnapping free blacks from free states then having them shipped back into the Southern slave states. All for sale as slaves of course. Yes, Yankee slave traders. Now there's something folks don't talk much about.

History documents that the free states in the North were part of the Reverse Underground Railroad. That's especially true in regards to Northern free states along the border of the slave states such as Kentucky, Missouri, and so on. And of course, the Reverse Underground Railroad is said to have been very active in Northern cities. That's even more true when looking at how the workers in the North saw the arrival of free slaves from the South as a threat to their employment. Many were worried about their employers replacing them with freed slaves because they'd work for less pay.

As for the Yankee practice of kidnapping freed slaves then shipping them back, it's said that freed slaves in New York City and Philadelphia were especially vulnerable. Believe it or not, in New York there was a gang known as "The Black Birders" who were known to make their living from kidnapping and selling freed and fugitive slaves, men, women, and children, back to where they came from.

Sadly, children are said to have been easily kidnapped and re-sold by Yankees in Northern cities. To give you an example of how bad it was, according to one source, during a two-year period in the city of Philadelphia there was at least 100 freed slave children who were abducted and re-sold before shipping them South. I read where black newspapers in Northern cities regularly ran missing children notices. So yes, it must have been ongoing.

Here's another aspect of this, in many Northern cities, many of the gangs that were part of the Reverse Underground Railroad were actually assisted and supported by local police and city officials. It is known that there were policemen and city officials who actually helped those gangs in an effort to rid their cities of freed slaves. From what I can tell, there were some Northerners who where fine freeing slaves as long as those freed slaves didn't move to their city.

There were a number of Yankee slave traders that either ran or worked with gangs to kidnap freed slaves. And for those who don't think there's always been equal opportunity when it comes to slave traders in the North, there's the case of Martha "Patty" Cannon who was actually the leader or co-leader of one such gang from 1811 to 1829.

Her gang was the Cannon-Johnson Gang of Maryland-Delaware. They kidnaped freed slaves and fugitive slaves, from the Delmarva Peninsula of Delaware, Maryland, Virginia, and Chesapeake Bay, to sell back into slavery in the South. Their activity was what became known as the Reverse Underground Railroad.

She sold and shipped to awaiting slave owners in the deep South. Her captives are said to have been chained and hidden in the basement, attic, and in secret rooms in her home. Some of those kidnapped were taken in covered wagons to Cannon's Ferry where they put aboard a schooner and to Georgia and other slave markets. Some of her captives were taken to Alabama and Mississippi in wagons overland. Many were said to have been sold to the slave traders wanting more and more slaves in the Caribbean and South America.

Her partner Joe Johnson, who was reported to be half-black, and was key to keeping their captives in line. He used leg irons and shackles, and was known to whip the hide of those who insisted that they were free. He was arrested in 1822 and sentenced to the "pillory".

For those of you who have never heard of the "pillory," it was a device made of  wood or had a metal framework which was erected on a post. The holes in it was used to secure an offender's the head and hands. It was a lot like the "stocks" where it was used for punishment through public humiliation and physical abuse. It's where we get the term "pilloried" which means to be attacked publicly. For Johnson, along with being subject to physical abuse by anyone there, records show that a sentence of 39 lashes was carried out.

In early 1829, Martha "Patty" Cannon was arrested and convicted on four counts of murder by a jury of 24 white males. She had actually murders at least four freed slaves, three of which were just children. And while it's suspected that she indeed killed more, that's what she was convicted of and sent to prison for. While in prison, she committed suicide.

There were other Yankee slavers on the Reverse Underground Railroad all the way up to the end of the Civil War. As shocking as it sounds, there were those much worse than that of Martha "Patty" Cannon.

Posted by Tom Correa at 2:38 PM No comments: