They Kept Great Notes In The Old West

I've had a number of people take me to task over my searching old newspapers and court and county records for information when writing my articles. Some tell me that newspapers can't be trusted. And frankly, when it comes to the reporting of things such as the Cowboy faction versus the Earp faction by the Tombstone Epitaph, I agree 100%. Some newspapers were as biased back then as they are today.

But aside from that aspect of what was reported, some folks simply don't want to acknowledge that folks in the Old West kept great notes on most everything from who was visiting who, to who bought who's prize winning bull, to Aunt so and so is visiting so and so, was actually written about. And make no mistake about it, if something happened, especially such as a shooting or a brawl or a robbery, and especially if it involved some noted gunman, it's just about a sure bet that you can find it in an old newspaper somewhere. If its not, than the odds are against it ever happening.

Below is a sample of some of the things carried in a newspaper. I found it interesting that this was what they considered newsworthy at the time.

The Footpads Escape, But Are Pursued With Bloodhounds One Man Brought to Bay Under the Buena Vista Street Bridge -- A Nervy Real Estate Agent.

A bold attempt at highway robbery was made last evening at the Walnut Street bridge, East Los Angeles, a buggy containing two women being held up by a couple of young toughs. Before securing any plunder, however, the footpads were frightened away by the screams of the terror-stricken women, and made good their escape. [Footpad is defined as "a highwayman operating on foot rather than riding a horse."]

Later on a fellow was captured hiding under the Buena Vista Street bridge, and is now locked up in the city Jail on suspicion.

Shortly before 7 o'clock, Mrs. Fraley and daughter were on their way toward the city, intending to pay a visit to some friend's. Just as they drove onto the bridge over the river at Walnut Street, two young men, roughly dressed and with the dirty, unkempt appearance of tramps, jumped toward the carriage, threatening the occupants with death if they made any outcry.

Instead of keeping silence, Mrs. Fraley screamed at the top of her voice, and was rewarded by hearing the footsteps of someone hurrying to the rescue. The highwaymen heard them too and hastily dodged back into the shadow, jumped down into the river bed and disappeared.

The person who appealed upon the scene at such an opportune time was R. Doyle, a real estate agent whose office is on South Broadway and who resides in Glendale. He was on his way home and had just reached the eastern end of the bridge when he heard the shrieks of the frightened women.

On coining up he was told of what had occurred, and at once acted. Mrs. Fraley was told to drive to the East Side Station and notify the police officers, while Doyle went to the residence of John Belt near by.

Belt keeps a pack of hounds, which have more than once been used for trailing fugitives, and the dogs were at once taken out and placed on the scent. They picked up the trail immediately and started off straight down to the river bed. The tracks ran for some distance and then separated.

One of the men had evidently crossed through the water, wading so as to throw the hounds off the scent. The dogs were baffled for a time, but were taken over, and after casting about above and below where the trail had been lost, two of them found it and were off again. Soon their excited braying told that the game had been run down was in eight. When the pursuers came up the dogs were found to have a young hobo about 19 years old cornered under the Buena Vista street bridge.

Doyle placed the fellow under arrest and closely questioned him. His name was given as Mike Veite and he positively denied having been engaged in any hold-up, or that he had been near the Walnut Street bridge.

His shoes and trousers were wet and muddy, however, showing that he had been wading In the river, and in general description he tallied with the would-be robbers. Veite attempted to explain his wet and muddy feet by saying that he was washing himself in the river, although he failed to say why he should keep his shoes on while bathing his feet.

The prisoner was brought to the police station at 9 oclock by Mr. Doyle searched and booked. Detectives were sent to the scene and made a thorough search for the other man, but within a late hour no trace of him had been discovered. The bold attempt of the robbers if the more, audacious when the hour of the hold-up is considered, and the fact that it occurred on the Pan Fernando Road which is one of the most frequently traveled highways leading into the city.

Petty Offenders Have Their Cases Quickly Disposed Of.

On a charge of forgery L. J. Laird, who was a couple of days ago brought back to this city from San Francisco, was yesterday arraigned in the police court.

Examination was set for today and bonds were fixed in the sum of $1,500. Mary Connolly was tried before Justice Rossiter on a petty larceny charge of having stolen a calico wrapper from a line where it was drying in the yard of Lew Sing's wash house on Los Angeles Street.

The Chinamen did some tall swearing, notwithstanding which Mrs. Connolly was found not guilty and discharged. Once again the old offender, Nellie I Martinez, showed up in court, this time on a charge of disturbing the peace of a woman in the Buena Vista house by fighting and quarreling. Nellie was arrested on a warrant, pleaded not guilty, and trial was set for this afternoon at 4 o'clock.

The concluding arguments in the misdemeanor case against F. D. Black, accused of selling pools on horse races arid book-making. In violation of law, were to have been heard, but on motion it was ordered that the matter be submitted on briefs, which will be filed within a few days.

Justice Owens rendered his decision in the old disturbance of the peace charge against L. D. Ham, finding the defendant guilty and ordering his appearance on Friday to receive sentence.

Conclusion of the hearing of Eugene Gamier on a similar complaint went over until Saturday afternoon at 2:30. Frank Burk arrested several nights ago for drunkenness and carrying a concealed weapon, appeared in court and entered a plea of not guilty to the charge. Today at 1:30 the case will be placed on the calendar for trial.

John Bryan, now doing fifty days on the chain gang for drunkenness, was arraigned for disturbance of the peace. Admitted at the time he was possessed of his jug. A plea of not guilty was entered and Saturday was set for trial.

Floaters of thirty days each were given to Frank Libbey and J. H. Fitzgerald, vagrants arrested for sleeping in boxcars. With the disposal of a lot of drunks, the dockets were cleared for the day.

Lively row on First Street ended in court. Charge of battery preferred by one E. B. Stork. Lyman H. Washburn, manager of the Washburn Land Company, with offices at 115 West First Street, was arrested yesterday afternoon by Officer Sparks and escorted to the police court.

The trouble between Stork and Washburn grew out of business difficulties. Stork has been employed by the man, he had arrested and has been sleeping in the office. Yesterday morning he started to move out, bag and baggage and had a portion of the furniture on the sidewalk when Washburn came upon the scene.

Hot words ensued, finally ending in blows. Stork claims that Washburn, who is a cripple, struck him over the head — with his wooden arm, while on the other hand Mr. Washburn denies that he hit Stork at all, but says his son stepped in and did it for him.

At any rate Stork came to the police headquarters in a bruised condition and, seeking out Deputy District Attorney James, secured a complaint, swore to it in the police court and caused the arrest.

Washburn was arraigned before Justice Rossiter, pleaded not guilty, had trial set for this afternoon and was released on his own recognizance.

THROWN OUT IN A RUNAWAY

Mrs. Madigan of Burbank, an elderly woman Inclined to embonpoint, drove into the city yesterday to do some shopping, accompanied by her son by a former husband, Frank White. While driving along Broadway near the corner of First Street at 2:15 in the afternoon, their rig was smashed into by a runaway horse attached to a plumber's wagon.

Mrs. Madigan and her boy were sent flying alighting on the paved street with more force than dignity. The youth was unhurt, but Mrs. Madigan was taken to the receiving hospital, where it was found that she was only bruised. After an hour's rest, she was able to leave. The runaway horse was captured before further damage had been done.

Ever since the police inaugurated their crusade upon property owners who rented buildings to Chinese to be used as lottery dens, and thus drove the Celestials out, few arrests have been made of lottery ticket sellers, for the very good reason that few joints were running.

A few of the heathen are plucking up courage, however, and starting in again on the sly. Yesterday two of them, Ah Sing and Ah Bow, were surprised in the act of selling tickets, were arrested and sent to Jail. Ball of $25 each was soon put up by their friends and they were released, to appear in court today for arraignment."

-- the above sample was from a Los Angeles Newspaper, December 3rd 1896.

As for some of the things that I find very interesting in the old newspapers, I like the way they reported things back in the day. For example, in this last article, they say, "A few of the heathen ..." Can you imagine a newspaper calling anyone a "heathen" today? It just wouldn't happen!

Besides such reports as the police and court reports, their local papers were full of what we today call "Social Media". I've included some below so can see it for yourself. 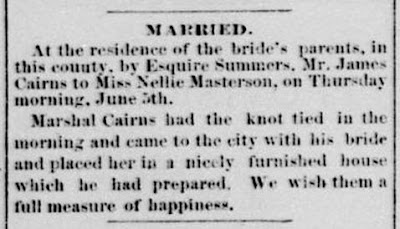 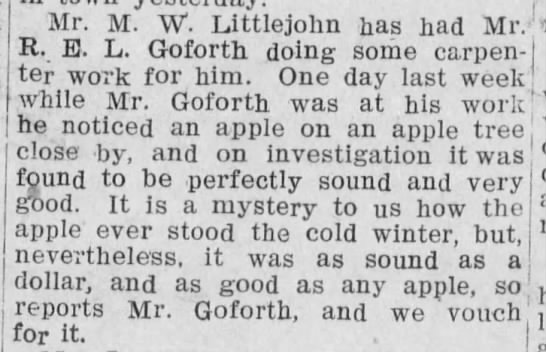 Fact is, people back in the day wrote about everything. One of my great go to sources for information about the California Gold Rush in the area that I live in is a local man who charted his family's history here.

He copied a great number of the newspaper articles in the Calaveras County archives, and pasted them in book form in chronological order. Initially it was simply an effort to chronicle his family life in these parts. But in effect, he listed down just about everything that was reported in local newspapers here from 1860 and into the 20th century.

His books are copied news clippings of shooting, visitors, wagon wrecks, mining accidents, horrible accidents, great funny stories, and much more. From who was in the camp visiting who to who was hanged. His work proves that they kept great notes back in the Old West, no matter how many people want to deny it.