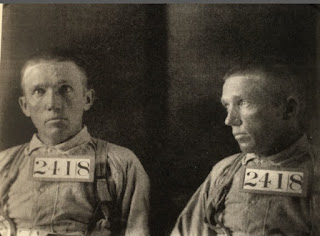 Alvin "Pack Saddle Jack" Potter was born sometime in 1878. Some say he died in the 1920s, but really it's not known when he died or how. Though that's the case, we do know prison records show he's buried in the New Mexico State Prison Cemetery in Santa Fe, New Mexico. As for who was he? Well, he started out a petty thieve, moved on to join a small gang of train robbers, and then graduated from thieve and full fledged murderer.

It's said he picked up the handle "Pack Saddle Jack" because that was the type of saddle that he used when riding his horse. Yes, some say he actually used a pack saddle instead of a regular riding saddle to ride a horse. Of course, another story goes that he was a petty criminal who supposedly hid the things he stole in his pack saddle and covered it with a blanket. As strange as it sounds, it's said he'd actually sit on top of the blanketed pack saddle in an effort to get people to stop thinking that he was hiding something. If that sounds pretty dumb to you, please don't feel alone on that. I thought so as well when I researched this outlaw.

If you've ever packed a pack saddle, then you know how it sounds pretty silly for someone to try to hide stolen goods on a pack saddle even by covering it with a blanket -- all with the hopes that no one notices you're riding on something. It's one thing to use panniers, but just a pack saddle would be pretty obvious.

From what I could find out about "Pack Saddle Jack," since around 1897, he and his family lived in Cedaredge, Colorado. By 1907, he was in jail in Delta, Colorado, for beating up his wife. He was one of the three outlaws in a gang which also included Harvey Logan, aka Kid Curry. He and Curry and another robbed a Denver & Rio Grande train near Parachute, Colorado, on July 7th, 1904.

The three train robbers had the Baggage Master open the doors of the baggage car and then they used dynamite to blow open the safe. While they were expecting to find a shipment of gold, the safe was empty. It's said the gold shipment was actually shipped out earlier than scheduled. From there, the badmen headed out and ended up in Battlement Mesa where they stole fresh horses.

While this was going on, lawmen gathered a posse of town's folk, local ranchers, and cowboys from around the Grand Junction and Parachute area. As soon as they were ready, they took off after the train robbers. The posse caught up with the outlaws and immediately a running gun battle started.

Somehow the badmen escaped that fight, but the posse again caught up with them on East Divide Creek. Legend says the outlaws hid behind rocks and yelled at the posse to "go back or get hurt!"

The posse didn't take kindly to being threatened by a few lowlife outlaws and the battle was on. Soon, one outlaw was heard screaming that he'd been hit. Many in the posse said later they heard him say he was going to "finish the job" before hearing a shot fired. When the posse overtook their position in the rocks, they found an outlaw with a bullet hole in his chest and a bullet hole in his head.

The coward who took his own life was later identified by Pinkerton Detectives as Kid Curry. Since this was pretty close to Glenwood Springs, he was taken to that graveyard where he was buried. His grave is supposedly near Doc Holliday's grave there.

In March of 1907, famed Colorado lawman, former Gunnison County Sheriff and Deputy U.S. Marshal Cyrus Wells "Doc" Shores, was working as a railroad detective. He arrived in Cedaredge looking for information on Pack Saddle Jack and his cohort. He knew they were involved in the Denver & Rio Grande robbery, and he needed to find them.

Cyrus Wells “Doc” Shores was a legend in that part of the country. He was considered a lawman's lawman. He was born on November 11th, 1844, so he was a 62 year old man when he arrived in Cedaredge. Just as point of interest, he died on October 12th, 1934. Yes, just one month shy of 90 years old. He's buried in the Gunnison Cemetery.

He was considered tough as they came, a lawman with common sense and a great deal of smarts who was known for sniffing out badmen. He started out as a  lawman on Colorado's Western Slope in the early days when lawmen had to make the law as they went along. As the Gunnison County Sheriff, he was known for the captured of Alferd Packer who was known as the "Colorado Cannibal." After serving as a Deputy U.S. Marshal, he took the job of railroad detective. The inscription on his headstone reads, "Western Colorado's most noted frontiersman, pioneer and lawman."

Shores' investigation of the the Denver & Rio Grande robbery led to the arrest of Pack Saddle Jack in Glenwood Springs. Because of Shores' reputation, it's said Pack Saddle Jack didn't put up a fight. But because of alibis, a jury couldn't convict him and he was acquitted in June of 1907.

After the trial, Pack Saddle Jack moved his wife and four children to Taos, New Mexico. It was there on March 26th, 1909, that after being involved in a bar-fight in Robert Pooler's Saloon in Taos, Pack Saddle Jack left to find a gun.

Robert C. Pooler was born on May 9th, 1872. He was only 36 on the night that he had to deal with Pack Saddle Jack. Fact is, Jack was only 4 years younger than Pooler.

Alvin "Pack Saddle Jack" Potter was seen committing the murder and was immediately arrested. This time, a fake alibi wouldn't be able to get him off. He was tried and convicted in a New Mexico court of 2nd degree murder. For his killing of Taos saloon owner Robert Pooler, Pack Saddle Jack was sentenced to 99 years in the New Mexico State Penitentiary.

While I couldn't find when this killer died, there are those who say that former Deputy U.S. Marshal Doc Shores visited Pack Saddle Jack in prison when Shores was working on a book. Shores had reported that Pack Saddle Jack had gone insane in prison and died sometime there in the 1920s.

But frankly, who knows? Besides, when he died doesn't really matter. What matters is, insane or not, he spends eternity frying in Hell for ambushing and killing an innocent man who is said to have left behind a wife and children.