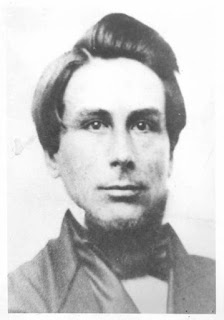 I can't find what he did for a living, but he did become a Methodist preacher when he was 23 years old while still in Connecticut.

While still in Connecticut, he married his second wife Lydia Ann Joselyn on February 23rd, 1858. They had four children together. About three years later, he moved his family to Massachusetts. Then, a year after the Civil War broke out, in 1862, he joined the Massachusetts 52nd Infantry. He spent the rest of the Civil War, a soldier. Some say that's where he learned whatever he knew about medicine. A skill that he used later.

After his enlistment was over with, he became a doctor. He returned home to Massachusetts for almost 10 year before leaving his wife and children and heading to the goldfields of South Dakota. He is known to have walked beside a wagon train from Cheyenne, Wyoming into the Black Hills to become the first preacher on any denomination to enter the Black Hills.

There are tales of him going into saloon and gambling halls, but in reality, it was in front of the saloons that he was known to preach against the evils of alcohol, sinful women, and gambling. It's said the prostitutes used to jeer at him from upstairs windows, and saloon and casino owners would have their bouncers run him off to preach somewhere else. And yes, he would move on and do just that.
After preaching a sermon on August 20, 1876, he placed a note on his cabin door and left. The note read, "Gone to Crook City to preach, and if God is willing, will be back at three o'clock."

As we all know, Indians were used as scapegoats for a lot of things that took place back in the day. And while there may have been those who believed that the Indians did kill him, there were more folks there who simply found that story to hard to swallow for a number of reasons. One is the way he was killed.

There was talk at the time that his killer was some thief who didn't care if he were a preacher or not. Since there was a lot of scum in Deadwood who preyed on others, it wouldn't be that hard for folks to believe that someone killed him for whatever they could find on him -- no matter how little.

A great deal of talk started to go around saying that Deadwood's saloon owners didn't like his preaching right outside their establishments and had him killed to get rid of him. Some say those saloon owners, and those running the gambling in town may have hired someone to kill him so that Smith would stop hurting their business. It wouldn't have been too outlandish to think that a saloon-owner, the owner of a gambling hall, or even some madam of a whorehouse, would have wanted to kill an effective preacher like Smith. A preacher who they saw as cutting into their income. 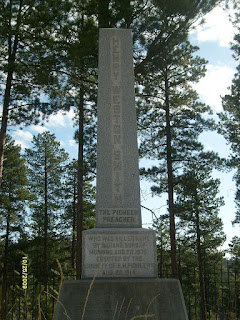 Henry Weston Smith's body was returned to Deadwood to be buried there. A member of Smith’s congregation, C. E. Hawley, conducted the service in the absence of another clergy. While Smith was initially buried in Deadwood's old graveyard, like Wild Bill Hickok, he was later relocated to the Mount Mariah Cemetery.

In 1914, a group of citizens raised money for a monument to be erected in his honor. The monument was dedicated and placed on the very site where he was found murdered. Yes, right there alongside that road on the way to Crook City from Deadwood.

In either 1994 or '95, a South Dakota state highway improvement project needed to have Smith's monument moved. When it was moved, the workers found a copper time capsule that had been buried under it in 1914. When opened, researchers found period artifacts along with a newspaper. After examining the items, they were taken to a museum for safekeeping. Researchers then made another time capsule with a few contemporary items from the 1990s and reburied it under the new monument. That monument is located three miles south of Deadwood on Highway 85.

Henry Weston Smith was a Civil War Union soldier and a miner in the Black Hill of South Dakota. But most of all, Smith was a preacher pretty much all his adult life. And though his death was attributed to Indians, who really killed him and why is truly a mystery that remains unsolved. We may never know who really killed him. What we do know is that even though he was in the Black Hills only a short while during its toughest days, he did make his presence known. All for the good.

Tom Correa
Posted by Tom Correa at 9:40 AM 3 comments: