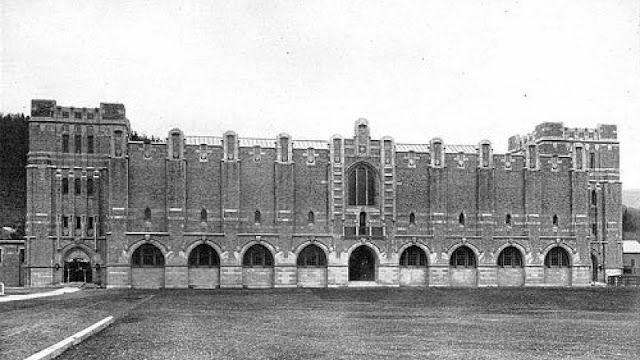 Also known as the Great Grog Mutiny, the riot at the U.S. Army's Military Academy in West Point, New York, began on Christmas Eve in 1826. What was it over, you ask? Well, eggnog and whiskey!

Because of the large number of small dairy farms in America at the time, there was a steady supply of milk, cream, and eggnog during Christmas. It's said that eggnog was a particular favorite of early Americans, as it is today. Of course, spiked eggnog is also a favorite of many people today, just as it was back in the day. One well-known eggnog fan, who was also known to add copious amounts of rum, sherry, brandy, and whiskey, was none other than George Washington.

It resulted from a large amount of whiskey being smuggled into the academy a couple of days earlier. It was supposedly used to spike the eggnog of a Christmas party in the North Barracks of the academy. What happened was something that happened in so many other colleges all over the nation, students got drunk.

As for the riot, what happened at West Point was enormous. The scale of the riot was actually incredible. It's said that the riot involved more than a third of all of the cadets by the time it was brought under control on Christmas Day. Imagine that a third of all cadets were involved in the drunken riot. Yes, all because the cadets got drunk on many eggnogs made with smuggled whiskey.

One of the big differences between what took place at West Point and that of other colleges was the actual court-martialing of twenty cadets and the discharge of one active-duty enlisted man. And as for those rioters, a few would become famous in their own right. One was cadet Jefferson Davis of Mississippi, who would become the President of the Confederate States of America.

Though not court-martialed, it's said that Davis used his family's political influence to sidestep disciplinary actions. Jefferson Davis' disciplinary problems were well known at the academy. Most believe he would have been expelled if his family were not politically connected. Davis would graduate 23rd in a class of 33 in 1828. In the same class at West Point with Davis was future Confederate general Albert Sidney Johnston of Kentucky. In the class behind Davis and Johnston were future Confederate generals Robert E. Lee and Joseph E. Johnston, Virginia.

By 1826, West Point academy had a faculty and staff of 36 men teaching mathematics, engineering, physics, chemistry, life sciences, and military tactics. There were 260 cadets there, and its superintendent was Colonel Sylvanus Thayer, who took command of the United States Military Academy in 1817.

The school is said to have had a drinking problem by that time. In fact, according to reports, by 1826, drinking was seen as out of hand. So now, imagine how they took it when the administration told them that their Christmas eggnog would be alcohol-free. That didn't sit well at all with many there. And yes, that's what prompted a few to smuggle whiskey into the school.

It all started on the night of December 22nd, cadets William R. Burnley and Samuel Alexander Roberts, both from Alabama, and Alexander J. Center from New York were at Martin's Tavern. The three had planned to purchase a gallon or more of any kind of booze that they could lay their hands on. They wanted to use it as a base for the eggnog at the Christmas party just two nights later in the North Barracks. They decided to settle on a half-gallon of whiskey if they had to.

Earlier that night, Army private James Dougan was on guard duty. He allowed the three cadets to take a boat across the Hudson to smuggle whiskey. As for the duty cadet guard of the day, he was Phillip St. George of Virginia.

The Christmas party started with only nine cadets in room No. 28 in the North Barracks. The word swept the academy very soon, and other cadets showed up. Then the party spread to room No. 5. Soon after that, several cadets showed up with another gallon of whiskey.

Hitchcock went to investigate and found cadets drunk on eggnog. He ordered them to their rooms. Then as he went to leave, he heard a second party going on in the room next door. When he went to investigate, he found several drunk cadets. James W.M. "Weems" Berrien of  Georgia, one particular cadet, used his hat to conceal his face.

It's said that anywhere from 80 to 90 cadets took part. And while no one was killed that night, the riot and total chaos resulted in Hitchcock and another officer being assaulted, windows being shattered, doors being demolished, and even banisters being ripped away from stairways. By daylight on Christmas morning, the North Barracks was completely wrecked.

How did Berrien and Murdock influence so many to wreck the North Barracks? Well, it is said that when Captain Hitchcock ordered another officer to fetch the superintendent, some of the drunk cadets thought Hitchcock called for regular troops with their heavy weapons to quell the riot. This made several cadets, many of whom were not drunk, take up arms to defend the North Barracks.

Superintendent Thayer was awoken at 5:00 a.m. by the sound of drums. He immediately ordered his aide to get his second in command. Meanwhile, Captain Hitchcock continued to restore order in the North Barracks while the main rioters were attempting to recruit other rioters with no success.

The troops took up positions while hearing the sound of gunfire, windows breaking, and listening to future officers swearing a blue streak while some of the injured cadets screamed in pain. The troops stayed while many rioting cadets kept up their threats to academy officials. Then things started to quiet down, especially as those cadets who were not drunk from the eggnog simply laid down their arms.

Col. Thayer decided not to indict the third of the academy's 260 students involved in the riot. Instead, he chose to target only the worst offenders. With that, 20 cadets were tried and expelled, Army Private Dougan was discharged for dereliction of duty, and the buildings that served as the riot site were completely demolished. In fact, it's said that when new barracks were reconstructed at West Point in the 1840s, the academy actually took special precautions to make any future riot a lot more difficult.

Imagine that. All as a result of making a little too merry at Christmas! 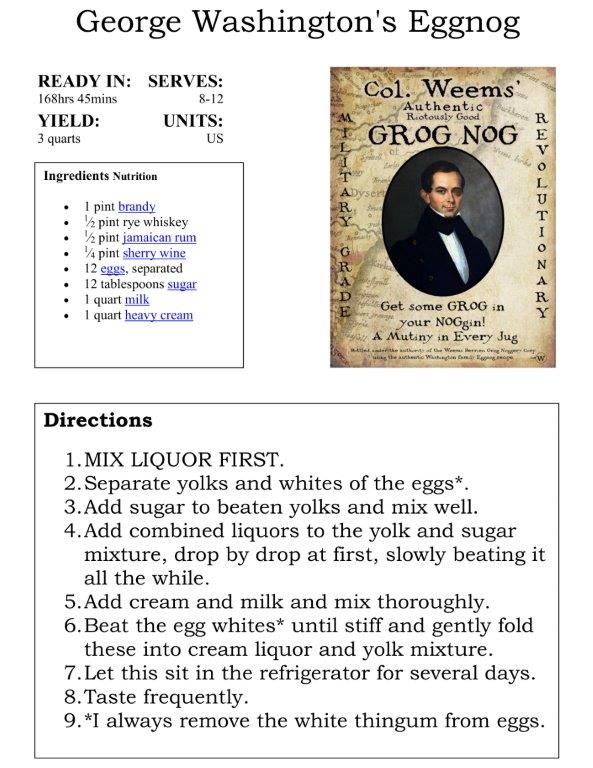 I've posted it here because it's linked to history, and I love eggnog. And frankly, my friends, after looking at the recipe and directions to make it, I can't wait to give it a try this Christmas.