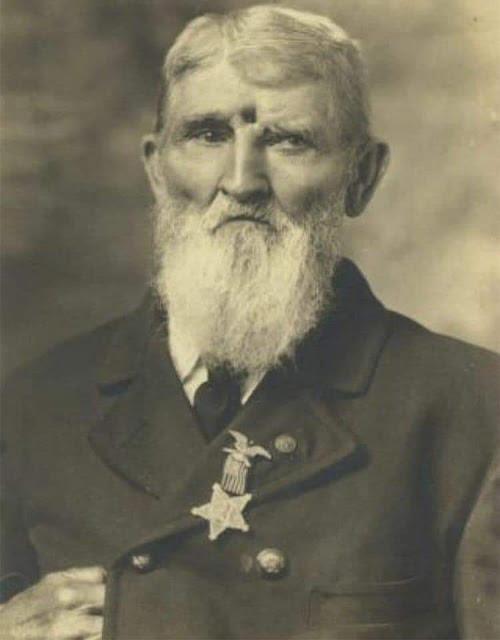 During the Civil War, he volunteered and served with the Union Army in Company G, 113th Illinois Volunteer Infantry. He rose to the rank of Sgt., and is said to have served exceptionally. After the war, Miller became a laborer, than a "house carpenter," and later a mail carrier. He lived in Illinois for a while, but then settled in Nebraska. He married Martha Adelia Homan Miller who was born in New York on February 25, 1846. It's believed they were married in either 1868 or 1870.

Some sources say he had a daughter, Lottie, and two sons, Percival and William. I couldn't find any trace of a daughter or a second son. From what I can find, their only child was a son, William Eugene Miller. who was born on October 6, 1871. Sadly, William died a mere ten days after his 8th birthday on October 16, 1879.

Jacob C. Miller lived until the age of 76 when he died in Omaha, Nebraska. He passed away on January 13, 1917. He was buried in the Cedar Dale Cemetery in Papillion, Nebraska. When his wife Martha passed away a few years later in 1923, she was interred with her loving husband.

Jacob, Martha, and William are buried together in a family plot in the Cedar Dale Cemetery in Papillion, Nebraska. There is a headstone for William, and a smaller marker for Jacob and Martha. Along side both is a headstone that has the words Medal of Honor inscribed just beneath Jacob C. Miller's name.

Yes, Jacob was a Medal of Honor recipient for bravery during the Civil War. In fact, during the Siege of Vicksburg, Miller is said to have volunteered for a dangerous mission that meant almost certain death. As amazing as it was, he survived and was later awarded our nation's highest honor. 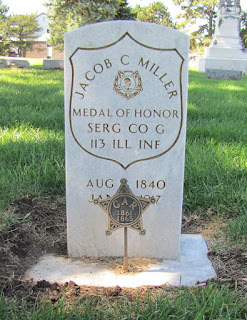 It's true. This Civil War Congressional Medal of Honor recipient served in the Union Army in Company G, 113th Illinois Infantry during the siege of Vicksburg, Mississippi, on May 22, 1863. The battle involved a long siege of the Confederate forces defending a very important position on the Mississippi River. Whoever controlled that position, controlled Vicksburg and would ultimately control the vital supply line of the Mississippi River.

General Ulysses S. Grant was in command of the Union forces at Vicksburg. What became known as the Siege of Vicksburg started on May 18, 1863 and lasted until July 4, 1863. It was considered a decisive Union victory. There were over 77,000 Union soldiers at the siege of Vicksburg. During the repeated assaults and 47-day siege, the fighting was fierce and cost in blood was high. As a result, 120 Union soldiers earned Medals of Honor.

Union forces tried on several occasions to storm the city. Miller was a member of a small group of volunteers that charged the Confederate lines. That volunteer charge, only un-married men were allowed to volunteer, would become known as the "charge of the volunteer storming party." It's said that he was at the head of his attacking force where the enemy fire was the heaviest and the odds of his making it through alive were not in his favor. Yet, he survived the charge. Years later, on August 20, 1894, he was awarded the Medal of Honor for his gallantry in the face of the enemy.

So about now you're saying, tell us how Jacob C. Miller was shot in the head and lived? Tell us about the picture atop this article with him wearing the Medal of Honor? 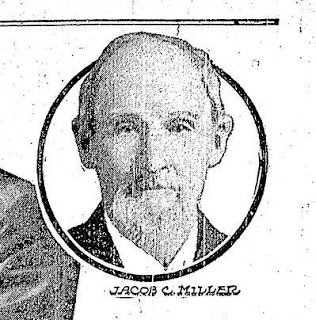 The picture of a man with a hole in his head is Jacob Miller. Just not Medal of Honor recipient Jacob C. Miller.

The story of the second Jacob Miller is fairly amazing in my book. He was born in Indiana in 1838 and enlisted in the Union Army's 9th Indiana Volunteer Infantry in 1861. I couldn't find out much more than that regarding his personal life.

Of course, according to some sources, he saw a lot of action during the Civil War. Yes, several skirmishes and battles, including the Battle of Chickamauga. That battle was fought from September 18th to the 20th, 1863. It was end of a Union offensive, called the Chickamauga Campaign, in southeastern Tennessee and northwestern Georgia. The battle of Chickamauga didn't turn out well for the Union. It was a Confederate victory.

That battle is regarded as the most significant Union defeat in the Western Theater of the American Civil War. And here's something else, the Battle of Chickamauga resulted in the second-highest number of casualties. It is only second to the Battle of Gettysburg.

It was during the Battle of Chickamauga in a forest along the Chickamauga Creek in Georgia that a Confederate musket ball struck the second Jacob Miller right in the forehead. The story is that he was hit at the exact moment that he was aiming his rifle.

Because of the Union forces were retreating, the second Jacob Miller was left for dead. Frankly, it's not too hard to think he was done for after getting shot in the head. That round laid him out. He was completely unconscious and looked to be dead as his comrades were retreating. It is said that he came to later and immediately realized that he was where he shouldn't be. He was in the midst of Union and Confederate dead at the what was the rear of the Confederate line.

As we can see by the picture of him in his old age, he lived to tell the tale of what happened. In fact, he recounted his experience to The Daily News of Joliet, Illinois, on June 14, 1911. It was at that time that he said how he woke and after realizing where he was, he feared becoming a prisoner of war.

It was then that he used his rifle as a crutch and started walking. Covered with blood, he said he walked and "those that I met did not notice that I was a Yank."

He walked until he came upon a road which he followed. Exhausted, he laid down by the side of the road and passed out again. Passing ambulance bearers found him. They put him on a stretcher to a wagon that carried him to the Union field hospital.

In that 1911 newspaper interview, Jacob Miller recalled how he was laying in the hospital tent. He said, "a hospital nurse arrived and put a wet bandage over my wound and around my head and gave me a canteen of water. The surgeons examined my wound and decided it was best not to operate on me and give me more pain as they said I couldn’t live very long, so the nurse took me back into the tent. I slept some during the night. The next morning, the doctors came around to make a list of the wounded and said they were sending all the wounded to Chattanooga, Tennessee. But they told me I was wounded too bad to be moved."

The Army doctors told him that Jacob that if he was taken prisoner, that he could be exchanged later. Even with a bullet still in his head, he knew better than to let that happen. After hearing the doctor, he left on his own to make his way to Chattanooga. He knew the treatment troops got as prisoners of war. He knew his chances of survival were slim if he were taken. So he left and walked until he passed out along side a road.

During this whole time, he kept asking doctors to remove the bullet. He said, "In all the hospitals I was in, I begged the surgeons to operate on my head but they all refused.”

After nine months of suffering, Jacob Miller met with two doctors who agreed to operate on his still open wound. It was then the doctors took out the musket ball. Jacob Miller remained in the hospital until his enlistment ended on September 17, 1864.

But that's not the end of the story of what happened to Jacob Miller. Fact is, there was more than just a musket ball in Jacob's forehead. As he stated in that 1911 newspaper interview, "Seventeen years after I was wounded, a buck shot dropped out of my wound. And thirty one years after, two pieces of lead came out."

During that interview, Jacob Miller wanted readers to know that he hasn't doing the interview to complain about his suffering, or about what happened, or his treatment, or even to blame anyone for leaving him when everyone was retreating. He simply thought he would relate what happened to him during the Civil War fighting for the Union. In fact, he made no qualms about how grateful he was to the government, saying, "The government is good to me and gives me $40.00 per month pension."

By the way, Jacob Miller died sometime in 1927.

So there you have two Union soldiers who fought in the Civil War. Both named Jacob Miller. In reality, that's probably a fairly common name for those days or today. One was a Medal of Honor recipient, the other was a man who proved miracles do happen.