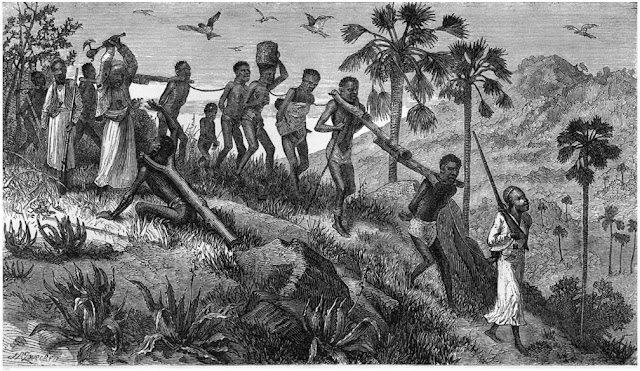 I received a note from someone on social media saying, "All White people, Hispanics, Latino, Asians, all non-Black people should apologize to Black Americans for what their slave ancestors had to go through. Black Lives Matter."

After shaking my head a little at the thought of someone actually apologizing to Black Americans for things that took place more than a century ago, I thought about how there is no excusing the wrongs of history. I also thought about it was our ancient past.

I believe someone apologizing for things long before their birth is a special sort of nutcase. I find that someone who thinks that they need to apologize for things that happened in the 19th century and before should be considered insane. They are the same sort of people who confess to crimes they did not commit. They are those pathetic individuals who seek notoriety even if it means taking the blame for things that they didn't do -- or had nothing to do with.

Image how large a sense of self-importance one has to have, how conceited and arrogant, how purely egotistical someone would have to be to expect an apology for what others did in the year 1513 when the Spanish imported the first African slaves to the Western Hemisphere? Yes, that was the year 1513 was when the Spanish took a handful of African slaves to Puerto Rico.

As for when did the first African slaves arrive in North America? Well, one reader recently wrote to ask me if the year 1619 was the first year that slaves were brought to the United States?

Well, since the United States did not form and declare its independence from England until 1776 and actually became its own country as a result of winning its Revolutionary War in 1783, the year 1619 has nothing to do with the United States.

In 1619, it is believed that nineteen African slaves arrived in Point Comfort, Virginia, which is near Jamestown. The British privateer responsible for bringing them to the British colony had stolen them from a captured Portuguese slave ship.

No, that Portuguese slave ship was not maned by my Portuguese ancestors. My ancestors back in the old country were fishermen, whalers, farmers, and cowboys. Yes, Portuguese vaqueiro.

Now here's the rest of the story about what took place in 1619 in the British colony of Virginia. Those 19 Africans were not treated as slaves. It's true. And here's why. The Portuguese slave buyers baptized their slaves before embarking -- and they did so when they bought them from Black chiefs in Africa. Because of that, the British considered those baptized slaves "Christians" -- and subsequently exempt from slavery.

As for mixed-race Spanish and Portuguese with African lineage? One historian called them the "charter generation" in the colonies because there were mixed-race men who were indentured servants, and who's ancestry included African and either Portuguese or Spanish. The fact is, those who were known as "Atlantic Creoles" were descendants of African women and Portuguese or Spanish men who worked in African ports as traders or facilitators in the slave trade.

One such indentured servant was a man who became famous. His name was Anthony Johnson. He was an African who arrived in Virginia in 1621. He is said to have arrived as a slave but became an indentured servant. Later, he became free and a property owner.

Though he was an African, and a Black man, he eventually bought and sold other African slaves for himself. In 1651, he owned 250 acres and had five indentured servants. Four of his indentured servants were white and one was black. What makes Anthony Johnson famous is that he made history by becoming the first legal slave owner in the 13 British colonies.

In 1653, a black indentured servant by the name of John Casor claimed his indenture had expired seven years earlier and that he was being held illegally by Johnson. He complained to Johnson's neighbor, Robert Parker, who intervened and persuaded Johnson to free Casor.

Parker offered Casor work, and he signed a term of indenture to the planter. Johnson sued Parker in the Northampton Court in 1654 for the return of his property which was John Casor. The court initially found in favor of Parker, but then Johnson appealed. In 1655, the British court reversed its ruling finding that Anthony Johnson still "owned" John Casor. With that, the court ordered that Casor be returned and that Robert Parker be made to pay court costs.

That court ruling was the first instance where a judicial determination in the 13 British colonies held that a person who had committed no crime could be held in servitude for life. While Johnson became famous because he made history by becoming the first legal slave owner in the British colonies in America, Casor became famous because he was the first person to be declared a slave in a civil case. Both men were Black. Both men were Africans.

When the 13 British colonies gathered together to vote for independence from England, they made an agreement that a vote for Independence had to be unanimous. While many today say that our founding fathers sold out and didn't end slavery in 1776, I don't believe they could have. We should keep in mind that many of the 13 colonies had already ended slavery by 1776.

Of course, there were colonies that had not. The colonies in the south depended on slavery and indentured servants for cheap labor. Because of that, there was no way that a vote for Independence would have passed the Continental Congress on a unanimous vote if a clause to end slavery was included in the draft of the Declaration of Independence.

By the American Revolution, the slave trade was outlawed by individual colonies. After the United States became a nation as a result of winning the war with England in 1783, anti-slavery groups grew and soon went about trying to exert political pressure on representatives to end slavery in the newly formed nation we call our United States.

By 1807, President Thomas Jefferson signed a law banning the importation of African slaves into the United States. It went into effect in January of 1808. From that point until slavery was abolished through an executive order in 1863, by way of the Emancipation Proclamation, slaves coming into the United States were smuggled.

Every American should be aware of the horrid treatment that African slaves endured in the United States for 80 years from 1783 to 1863. But how many Americans are aware that Africans sold their own people into slavery to Muslim slave traders for hundreds of years -- long before those same Africans started selling their own people to the Europeans?

While today BLACK LIVES MATTER wants to air their grievances regarding slavery in the United States in the 19th Century, they are silent and do not confront Muslim slave buyers who are presently buying Black African slaves sold by Black Africans. Yes, today in 2020.

Known as the "Arab Slave Trade," Muslims were buying Africans from other Africans for centuries before the Europeans started doing the same thing. It's said the Muslim slave trade benefitted Muslim countries for at least ten centuries. Yes, for ten centuries before Christopher Columbus mistakenly found the Bahamas thinking it was Asia.

So with that, I have to wonder why disregard the Muslim culpability that folks like BLACK LIVES MATTER and others don't care about? Why do the Muslim slavers get a pass? Is it because it doesn't fit their political agenda for reparation from Americans?

Here's something more, slavery is taking place today in Africa and the Middle East, and groups like BLACK LIVES MATTER aren't talking about it when they should be fighting modern-day slave traders who are buying and selling other Blacks to Muslims.

I read somewhere that murdered Libyan leader Muammar Gaddafi once apologized for Arab involvement in the African slave trade. He said that he "regretted the behavior of the Arabs, how they brought African children, made them slaves, then sold them like animals." He apologized as if he himself were there and could have stopped it. Obviously, since he apologized for things that happened in the Middle-Ages, ancient history, I have no idea who he was catering to.

The fact is, he apologized for the wrongs that were done by others who built their empires. No, not for the short 80 years from 1783 to 1865 that was in fact the case of slavery in our history as a nation known as the United States. But instead, he apologized for the over ten centuries that Muslim nations were buying and selling slaves. What he didn't apologize for the slave trade that was still actively taking place at that time. Yes, a Muslim slave trade still taking place today.

The Muslim slave trade today is all about money, wealth, and a complete disregard for human life. No different than it was back in the Middle-Ages. Those who buy and sell their people have no soul.

In the Arab slave trade, as with the Muslim slave trade today, the skin color of the sellers and the buyers are mostly black. Sadly, this only goes to prove that history tells us that skin color in itself does not guarantee that a person cares about human life any more than someone of a different skin color.

Frankly, before someone asked me and others to apologize for what took place over a century ago, they should demand an apology from those who are still selling Blacks to the highest bidder.