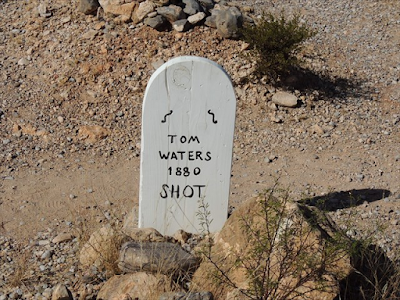 The article below is straight out of the Tombstone Epitaph:
July 25, 1880
A FATAL GARMENT
About 7 o'clock last evening the pistol was used with fatal effect on Allen Street, resulting in the death of T.J. Waters from gunshot wounds from a weapon in the hand of E.L. Bradshaw. The causes which led to this unfortunate tragedy are brief.

Waters was what is considered a sporting man, and has been in Tombstone several months. He was about forty years of age, powerful build, stood over six feet in height and weighed about 190 pounds. When sober he was a clever sort of man but quite the opposite when under the influence of liquor.

Yesterday he won considerable money and had been drinking a great deal, hence was in a mood to be easily irritated.

Bradshaw was an intimate friend of Waters but a very different character, being a man of medium size, over fifty years of age and very reserved and peaceable in his disposition. We understand that these two men had prospected together and when Waters first came to Tombstone he lived in Bradshaw's cabin.

Yesterday morning Waters purchased a blue and black plaid shirt, little dreaming that the fated garment would hurl his soul into eternity before the sun had set. It so happened that several good natured remarks were made about the new shirt during the day until Waters had taken sufficient liquor to make the joking obnoxious to him, and he began to show an ugly resentment and was very abusive, concluding with, "Now, if anyone don't like what I've said let him get up, G-d d-n him. I'm chief. I'm boss. I'll knock the first s--- of a b--- down that says anything about my shirt again."

This happened in the back room at Corrigan's saloon and as Waters stepped into the front room Bradshaw happened in, and seeing what his friend was wearing made some pleasant remark about it, whereupon Waters, without a word, struck Bradshaw a powerful blow over the left eye which sent him senseless to the floor.

He had just entered the street when Ed Ferris made some remark about the new shirt, which Waters promptly resented in his pugilistic style. After some more rowing Waters went back to Corrigan's saloon.

As soon as Bradshaw recovered from the knockdown he went into the back room, washed off the blood, went down to his cabin, put a bandage on his eye and his pistol in his pocket. He then came up to Allen Street and took his seat in front of Vogan & Flynn's saloon.

Seeing Waters in Corrigan's door, Bradshaw crossed towards the Eagle Brewery, and walking down the sidewalk until within a few feet of Waters, said: "Why did you do that?"

Waters said something whereupon Bradshaw drew his pistol and fired four shots, all taking effect, one under the left arm probably pierced the heart, two entered above the center of the back between the shoulders and one in the top of the head ranged downward toward the neck, any one of which would probably have resulted fatally.

Waters fell at the second shot and soon expired. Bradshaw was promptly arrested and examination will be had in the morning before Justice Gray.

Tom Waters didn't like being the brunt of jokes. And on July 24, 1880, Waters was being made the brunt of jokes over the blue and black plaid shirt that he wore that day. Later, while drinking in Corrigan's Saloon, the crowd heard Waters say, "I'll knock down any man who opens his mouth about my shirt again!"

He supposedly said that just as his supposed friend Edward Bradshaw entered the saloon. Bradshaw must have taken that as a sort of silly challenge and did in fact comment on Waters's colorful new shirt. In response, Tom knocked him down then left Corrigan's with his friend Bradshaw out cold on the floor.

Their friendship was short-lived if anything because it's said Bradshaw went in search of a gun when he came to. Angry and humiliated at what Waters did, an armed Bradshaw found Waters outside Vogan's Alley on Allen Street, and asked, "Why did you hit me?"

Waters who is said to have been quite drunk by then simply responded by yelling at Bradshaw about what he said about his shirt. Bradshaw responded by opening fire on Waters. Waters was hit once in the heart, once in the head, and two rounds struck his back. It's not known if he turned to run to get shot in the back.

Tom Waters is buried in the Boothill Cemetery in Tombstone, Arizona. As for what happened to Edward Bradshaw, well as strange as it might sound, though Tom Waters was killed by Edward L. Bradshaw on Allen Street, he was acquitted. It's true. Though Waters was unarmed at the time, Bradshaw stood trial for the shooting in September and was acquitted. Imagine that.
There are some who try to say that this was all about a shirt, but I don't believe that. To me, it was about being humiliated and attacked. Maybe, just maybe, that's why his jury acquitted him.
Tom Correa
Posted by Tom Correa at 11:50 PM 2 comments: