This is the first case of its kind, but it could be the future! 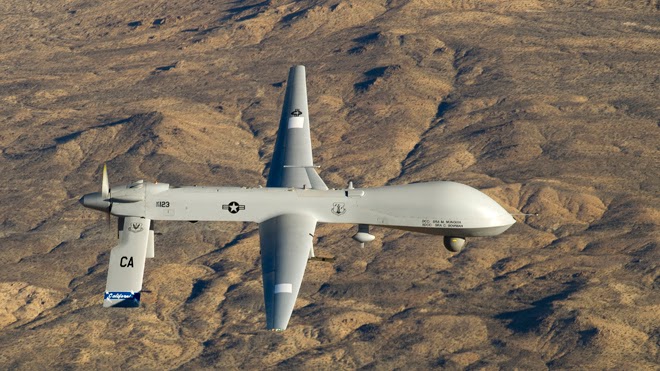 This is one of those news stories which I will get letters about so I may as well say it now, I'm not for drones in the hands of the federal, state, or local government.

I simply don't like the idea of Big Brother doing a fly-over of my property.

So now, with that being said, I'm almost certain someone will surely ask me if I feel the same way about the helicopter fly-overs around these parts looking for pot growers in this area of Glencoe?

Look, I know that they are going to take place in the so-called "War on Drugs." But, I'm just concerned about being watched on a daily basis by some government agency who believes for some reason that I need to be watched.

I don't like the idea, the whole concept that our government would believe that we are like some herd of animals that can't be trusted.

Friends, even folks raising bison, with as ornery as they can be, do not watch them daily. Yes, even badass bison are trusted to live freely.

I don't need a Big Brother watching or monitoring my movements as if I were in some sort of prison system. And since I used to work in a prison system, I know exactly how the prisoners are watched constantly.

As for the criminal in North Dakota, well what began as a wild west-style cattle-stealing case may have ushered in what is now being called "a brave new world of law enforcement" by using drones to gather evidence to put Americans behind bars.

Have you ever wondered about some of the things that can be avoided sometimes?

Which came first, the chicken or the egg, is an old question that seems to apply to law enforcement now and then. ﻿﻿﻿
﻿

In the case of farmer Rodney Brossart, after his arrest there was still "an armed standoff" with his family about going onto their property - I assume to look for the stolen beef.

Brossart was arrested on June 23, 2011, but his family refused at gunpoint to let authorities armed with a search warrant onto their 3,600-acre property to investigate the neighbors' complaint.

Nelson County authorities say Rodney Brossart and his family of Lakota threatened officers with guns and ignored repeated orders to appear in court.

Though it sounds as if the evidence was overwhelming, it sounds like the cows were never found. How does that happen?

Brossart was later released on bail, and warrants issued for his three sons. I gather because of the "armed standoff".

But the rest of the family refused for months to respond to orders to appear in court, and their refusal prompted Nelson County Sheriff Kelly Janke to have the U.S. Border Patrol deploy a Predator drone to conduct live video surveillance of the farm.

Now in the first-ever case of a U.S. citizen being convicted and sentenced to prison based in part on evidence gathered by a drone, in Lakota, N.D., Rodney Brossart got a three-year sentence for his role in an armed standoff with police that began after he was accused of stealing his neighbors' cattle in 2011.

The drone monitored the family's movements on the farm following what has been labeled "an armed standoff."

It is not clear how long the drone was deployed or whether it gathered evidence of the alleged cattle theft, or exactly why it was deployed to conduct such a surveillance?

After waiting long enough, it appears that the eye in the sky gathered enough evidence to prompt Sheriff Janke's men to finally move in in November 2011.

They arrested the other five family members on "terrorizing" charges.

“We put a 'tactical operational plan' together this afternoon and we implemented it and everything went as planned for us, so we're very pleased that we did end with a peaceful resolution this evening," Janke told WDAZ at the time.

Remember the chicken and the egg, well here it comes again.

A jury found Brossart not guilty of stealing the cows, valued at $6,000.

Imagine that! Farmer Brossart was found not guilty of stealing the cows!

But, Brossart did get three years - all but six months of which was suspended - for his part in the "armed standoff" -- based in part on video supplied by the drone to court officials, according to the Grand Forks Herald.

So the guy is found not guilty for stealing the cows, but was found guilty for not allowing the police to come onto the property and look for the non-existent cows.

I know that I'm going to get letters from folks saying that I'm for criminals and so on, but that's not the case.

Please understand that Mr Brossart has rights. If his rights against undue search and seizure are violated - than ours can be as well.

Granted that taking up arms against the law is not a good way to stop the violation of your rights, but that is exactly what was done.

Search Warrant or not, that family was not about to allow anyone to come on "their property" and search it.

The skeptic can say, "Oh, they were probably hiding the cows or something else!"

But remember, there are those who may look at this and say, "Since the man allowed himself to be arrested, what more did the police need?"

And I guess that's where I come from on this. If the police had enough evidence to arrest Rodney Brossart for stealing cattle, than why did they need to go onto his property?

Was it to look for more than just the missing cows?

The case could prove significant, because Brossart's attorney tried unsuccessfully to have the terrorizing charges related to his standoff with police dropped because evidence was gathered by the drone without a search warrant specifically allowing for it.

Prosecutors had previously dropped charges against Brossart’s wife and daughter, for their alleged roles in keeping police at bay.

Charges against his three sons related to terrorizing are still pending.

And yes, there sits the chicken or the egg, or as State District Judge Joel Medd said in court, "This case should have never happened. Chalk it up to stubbornness, to stupidity, to being at odds with your neighbors or any combination of those. We should never have been here if the cows would have just been returned."

Of course that goes to the other question, did Rodney Brossart have the cows to return? The story doesn't say one way or another.

Back East, Forbes magazine predicted it won't be the last time drones are used to put Americans in prison - and reports the use of drones for police missions is on the rise.

But this, well this is said to be the first time someone has actually been convicted because they were under "surveillance" from a drone.

So now, let's stop talking about our rights of privacy from Big Brother and instead let's talk about "the need" for this to have taken place.

So what "justified" using a Predator Drone in this case?
Does it make me wonder if he really stole the cows? Sure it does.

Does it make me wonder what made him so darn important that the local police needed to watch him so much? You bet!

Please understand what I'm getting at here; was this such a horrible crime, such a crime against humanity, a crime committed by a career criminal, or a crime that had something to do with put lives at risk, such a crime of such a degree that all resources needed to be put into action? Well, no.

It was a crime of the "possible" theft of a couple of cows.

Now, is that enough to get shot in some places, such as around here included? Yes, it certainly is.

But, that is usually if the person is caught red-handed with the cows.

From the reports, that's not the case here. Remember the cows were never found anywhere, and a jury could not prove beyond a shadow of a doubt that he stole them.

And as a matter of fact, the neighbor's cows weren't found by the drone either.

So now, for that county Sheriff to spend the huge funds needed to get a high-tech Billion Dollar drone from a Federal Agency simply to watch a guy who may or may not have stolen a few of cows worth $6,000 - well, where's the justification?

Yes, whether the guy is a jerk or a nice guy is beside the point, I believe that someone must have wanted to screw Rodney Brossart real bad.  At bad enough to throw all of this manpower and technology in the game to get a conviction.

And also, I'd like to know how a Sheriff actually justifies using drone surveillance on a small time suspect over a few missing cows?  How do you justify paying for such a thing?

Thinking about this for a moment? They paid for the use of a high-tech Billion Dollar drone, the cost of a drone operator or possible a more drone operators because they obviously didn't want him to get away?

All just to see if the guy had a couple of cows? Sure I understand what those cows were worth to the farmer who lost them, but is the price tag of trying to convict Brossart for this crime justify it?

Is this crazy or what?!

Friends, this is not exactly like watching a suspect who may have stolen the Mona Lisa or the Crown Jewels of England?

Maybe this Sheriff  has such a large budget, and the local taxpayers don't care that he or she just threw it away on crap like this? Maybe he or she thinks this all sounds like a great reason to allocate such resources and utilize high-tech tactical equipment?

For me, I would think a Sheriff's Department would have better things to do with its funds than to spend it on getting such a criminal which they didn't even get.

Remember, even after putting out all of that cash, manpower, and high-tech tactical equipment to use trying to nail farmer Rodney Brossart -- he was found Not Guilty and walked away with time served!

I'm sorry, but to me, even though I can sympathize with the neighbor who lost his cows, this seems like a lot of all sorts of resources for very little in return -- and it didn't solve anything.