A report released on February 04, 2014, says that the long-term effect of ObamaCare on the U.S. economy are worse than expected.

The Congressional Budget Office issued a revised projection that reports that nearly 2.5 Million American workers could opt out of full-time jobs over the next 10 years -- allowing employers to wipe 2.3 Million full-time jobs off the books.

Budget experts say that because ObamaCare offers an insurance alternative to employer provided coverage, many Americans who hold full-time jobs may decide to work part-time -- or not at all -- and get their coverage from the exchanges.

The report drew immediate reaction from GOP lawmakers, including House Speaker John Boehner who said the report indicates ObamaCare is only making it harder for middle-class Americans to survive in the bad economy.


Rep. Paul Ryan, R-Wisc., weighed in in a written statement, “ObamaCare is only making things worse. This costly law is not only pushing government spending to new heights, it is disrupting coverage and leaving millions of Americans worse off.”

The budget office says jobs will also be lost because employers may choose to hire less full-time workers or reduce the hours of their staff.

In 2010, the CBO projected ObamaCare would lead to about 650,000 fewer jobs. This new 2.3 Million estimate is scary in the fact that it was not expected.

The report states ObamaCare will also lead to a reduction of the net number of total hours worked by as much as 2% in the period from 2017 to 2024.

It states that “lower-wage workers” will see the biggest reduction in the number of hours worked.

Yes, lower-wage Americans are going to feel the pain worse than anyone else - Thanks Obama!

The agency did reduce its estimate of the number of uninsured people who will get coverage through the health care law.

The reduced number is expected to be about 2 million fewer people than is needed to get covered this year.

Sen. Orrin Hatch, a ranking member of the Senate Finance Committee, called the report “devastating” to the millions of Americans seeking employment.

“A direct threat to the long-term health and prosperity of our nation, this law must be repealed,” Hatch, R-Utah, said in a statement. “Its impact and consequences are too great.”
House Budget Committee Chairman Paul Ryan said the report indicates ObamaCare is making things worse for Americans.

“This costly law is not only pushing government spending to new heights; it is disrupting coverage and leaving millions of Americans worse off,” Ryan, R-Wis., said.

Will 2.5 Million Unemployed Americans decide to "ursue their dreams" without incomes or medical coverage?

The White House focused on the report's claim that the loss of jobs will not be due to employers cutting back, but due to Americans choosing to voluntarily leave the workforce.

Believe it or not, in one of the worse economies in US History, the Obama White House is now trying to spin this around to make things appear as though ObamaCare is allowing Americans to leave their jobs, and be "empowered" to "pursue their dreams".

While 90 Million Americans are out of work, and jobs are hard to find, the Obama White House is saying

"Americans would no longer be trapped in a job just to provide coverage for their families, and would have the opportunity to pursue their dreams," White House spokesman Jim Carney said.

"This CBO report bears that out, and the Republican plan to repeal the ACA would strip those hard-working Americans of that opportunity."

So let me get this straight, 2.5 Million Americans might lose their jobs because of ObamaCare - and the Obama White House sees this a good thing?!

The Obama crew thinks 2.5 Million Un-employed Americans will like being laid off because they can now "pursue their dreams"?

Are these jokers kiding?!

Wow! Talk about a group out of touch with the real world! 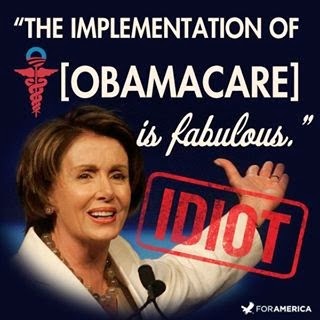