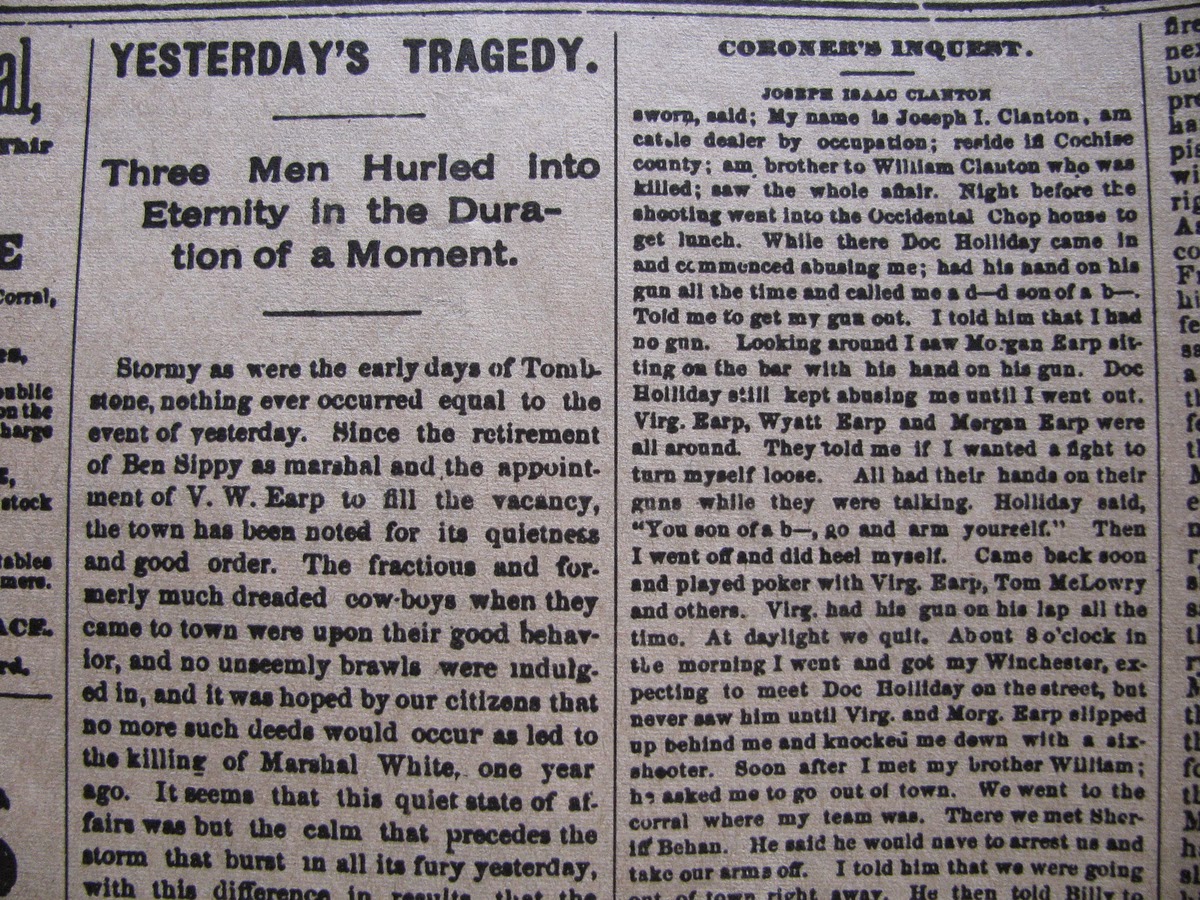 Three Men Hurled Into Eternity in the Duration of a Moment.

Stormy as were the early days of Tombstone nothing ever occurred equal to the event of yesterday. Since the retirement of Ben Sippy as marshal and the appointment of V.W. Earp to fill the vacancy the town has been noted for its quietness and good order. The fractious and much dreaded cowboys when they came to town were upon their good behaviour and no unseemly brawls were indulged in, and it was hoped by our citizens that no more such deeds would occur as led to the killing of Marshal White one year ago. It seems that this quiet state of affairs was but the calm that precedes the storm that burst in all its fury yesterday, with this difference in results, that the lightning bolt struck in a different quarter from the one that fell a year ago. This time it struck with its full and awful force upon those who, heretofore, have made the good name of this county a byword and a reproach, instead of upon some officer in discharge of his duty or a peaceable and unoffending citizen.

Since the arrest of Stilwell and Spence for the robbery of the Bisbee stage, there have been oft repeated threats conveyed to the Earp brothers -- Virgil, Morgan and Wyatt -- that the friends of the accused, or in other words the cowboys , would get even with them for the part they had taken in the pursuit and arrest of Stilwell and Spence. The active part of the Earps in going after stage robbers, beginning with the one last spring where Budd Philpot lost his life, and the more recent one near Contention, has made them exceedingly obnoxious to the bad element of this county and put their lives in jeopardy every month.

Sometime Tuesday Ike Clanton came into town and during the evening had some little talk with Doc Holliday and Marshal Earp but nothing to cause either to suspect, further than their general knowledge of the man and the threats that had previously been conveyed to the Marshal, that the gang intended to clean out the Earps, that he was thirsting for blood at this time with one exception and that was that Clanton told the Marshal, in answer to a question, that the McLowrys were in Sonora. Shortly after this occurrence someone came to the Marshal and told him that the McLowrys had been seen a short time before just below town. Marshal Earp, now knowing what might happen and feeling his responsibility for the peace and order of the city, stayed on duty all night and added to the police force his brother Morgan and Holliday. The night passed without any disturbance whatever and at sunrise he went home to rest and sleep. A short time afterwards one of his brothers came to his house and told him that Clanton was hunting him with threats of shooting him on sight. He discredited the report and did not get out of bed. It was not long before another of his brothers came down, and told him the same thing, whereupon he got up, dressed and went with his brother Morgan uptown. They walked up Allen Street to Fifth, crossed over to Fremont and down to Fourth, where, upon turning up Fourth toward Allen, they came upon Clanton with a Winchester rifle in his hand and a revolver on his hip. The Marshal walked up to him, grabbed the rifle and hit him a blow on the head at the same time, stunning him so that he was able to disarm him without further trouble. He marched Clanton off to the police court where he entered a complaint against him for carrying deadly weapons, and the court fined Clanton $25 and costs, making $27.50 altogether. This occurrence must have been about 1 o'clock in the afternoon.

The After-Occurrence
Close upon the heels of this came the finale, which is best told in the words of R.F. Coleman who was an eye-witness from the beginning to the end. Mr. Coleman says: I was in the O.K. Corral at 2:30 p.m., when I saw the two Clantons and the two McLowrys in an earnest conversation across the street in Dunbar's corral. I went up the street and notified Sheriff Behan and told him it was my opinion they meant trouble, and it was his duty, as sheriff, to go and disarm them. I told him they had gone to the West End Corral. I then went and saw Marshal Virgil Earp and notified him to the same effect. I then met Billy Allen and we walked through the O.K. Corral, about fifty yards behind the sheriff. On reaching Fremont street I saw Virgil Earp, Wyatt Earp, Morgan Earp and Doc Holliday, in the center of the street, all armed. I had reached Bauer's meat market. Johnny Behan had just left the cowboys, after having a conversation with them. I went along to Fly's photograph gallery, when I heard Virg Earp say, "Give up your arms or throw up your arms." There was some reply made by Frank McLowry, when firing became general, over thirty shots being fired. Tom McLowry fell first, but raised and fired again before he died. Bill Clanton fell next, and raised to fire again when Mr. Fly took his revolver from him. Frank McLowry ran a few rods and fell. Morgan Earp was shot through and fell. Doc Holliday was hit in the left hip but kept on firing. Virgil Earp was hit in the third or fourth fire, in the leg which staggered him but he kept up his effective work. Wyatt Earp stood up and fired in rapid succession, as cool as a cucumber, and was not hit. Doc Holliday was as calm as though at target practice and fired rapidly. After the firing was over, Sheriff Behan went up to Wyatt Earp and said, "I'll have to arrest you." Wyatt replied: "I won't be arrested today. I am right here and am not going away. You have deceived me. You told me these men were disarmed; I went to disarm them."

This ends Mr. Coleman's story which in the most essential particulars has been confirmed by others. Marshal Earp says that he and his party met the Clantons and the McLowrys in the alleyway by the McDonald place; he called to them to throw up their hands, that he had come to disarm them. Instantaneously Bill Clanton and one of the McLowrys fired, and then it became general. Mr. Earp says it was the first shot from Frank McLowry that hit him. In other particulars his statement does not materially differ from the statement above given. Ike Clanton was not armed and ran across to Allen street and took refuge in the dance hall there. The two McLowrys and Bill Clanton all died within a few minutes after being shot. The Marshal was shot through the calf of the right leg, the ball going clear through. His brother, Morgan, was shot through the shoulders, the ball entering the point of the right shoulder blade, following across the back, shattering off a piece of one vertebrae and passing out the left shoulder in about the same position that it entered the right. The wound is dangerous but not necessarily fatal, and Virgil's is far more painful than dangerous. Doc Holliday was hit upon the scabbard of his pistol, the leather breaking the force of the ball so that no material damage was done other than to make him limp a little in his walk.

Dr. Matthews impaneled a coroner's jury, who went and viewed the bodies as they lay in the cabin in the rear of Dunbar's stables on Fifth street, and then adjourned until 10 o'clock this morning.

The Alarm Given
The moment the word of the shooting reached the Vizina and Tough Nut mines the whistles blew a shrill signal, and the miners came to the surface, armed themselves, and poured into the town like an invading army. A few moments served to bring out all the better portions of the citizens, thoroughly armed and ready for any emergency. Precautions were immediately taken to preserve law and order, even if they had to fight for it. A guard of ten men were stationed around the county jail, and extra policemen put on for the night.

Earp Brothers Justified
The feeling among the best class of our citizens is that the Marshal was entirely justified in his efforts to disarm these men, and that being fired upon they had to defend themselves, which they did most bravely. So long as our peace officers make an effort to preserve the peace and put down highway robbery -- which the Earp brothers have done, having engaged in the pursuit and capture, where captures have been made of every gang of stage robbers in the county -- they will have the support of all good citizens. If the present lesson is not sufficient to teach the cow-boy element that they cannot come into the streets of Tombstone, in broad daylight, armed with six-shooters and Henry rifles to hunt down their victims, then the citizens will most assuredly take such steps to preserve the peace as will be forever a bar to such raids. 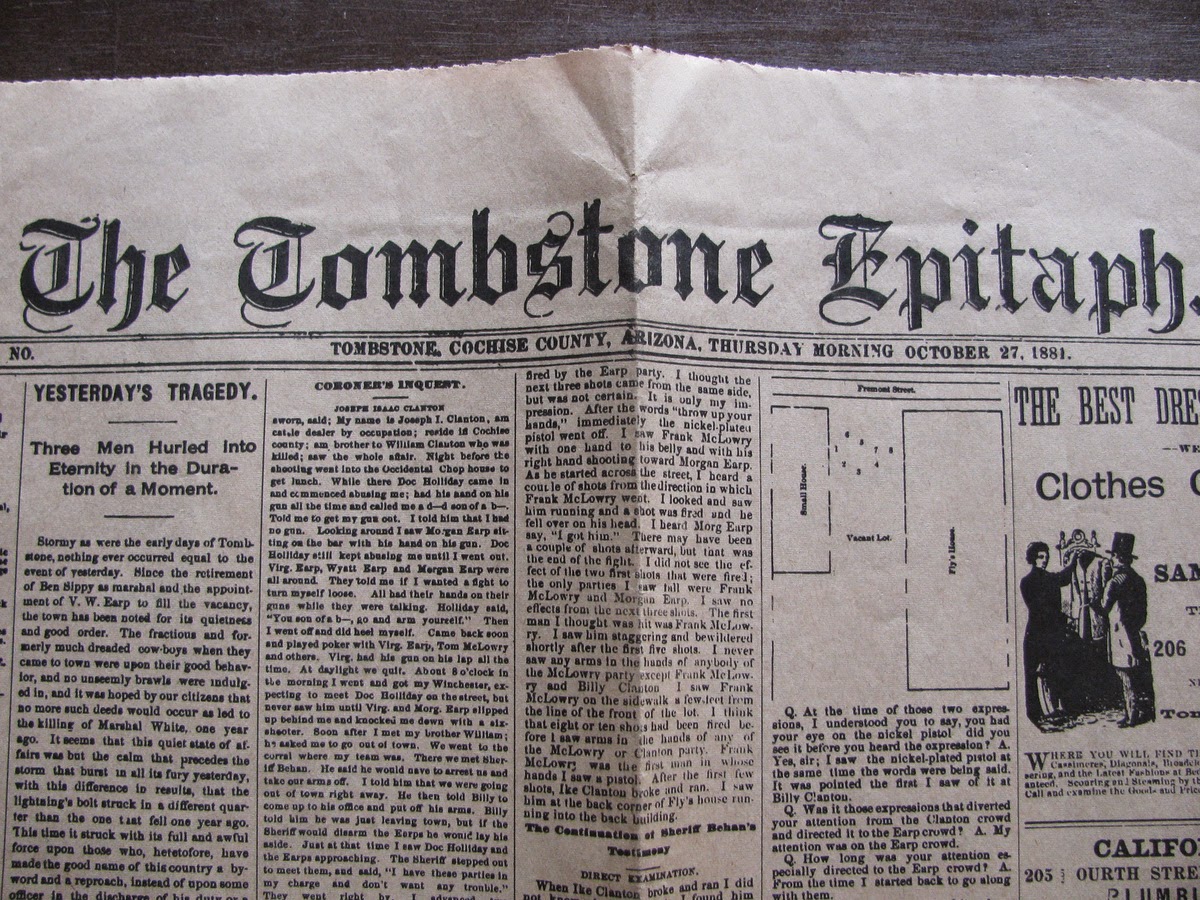 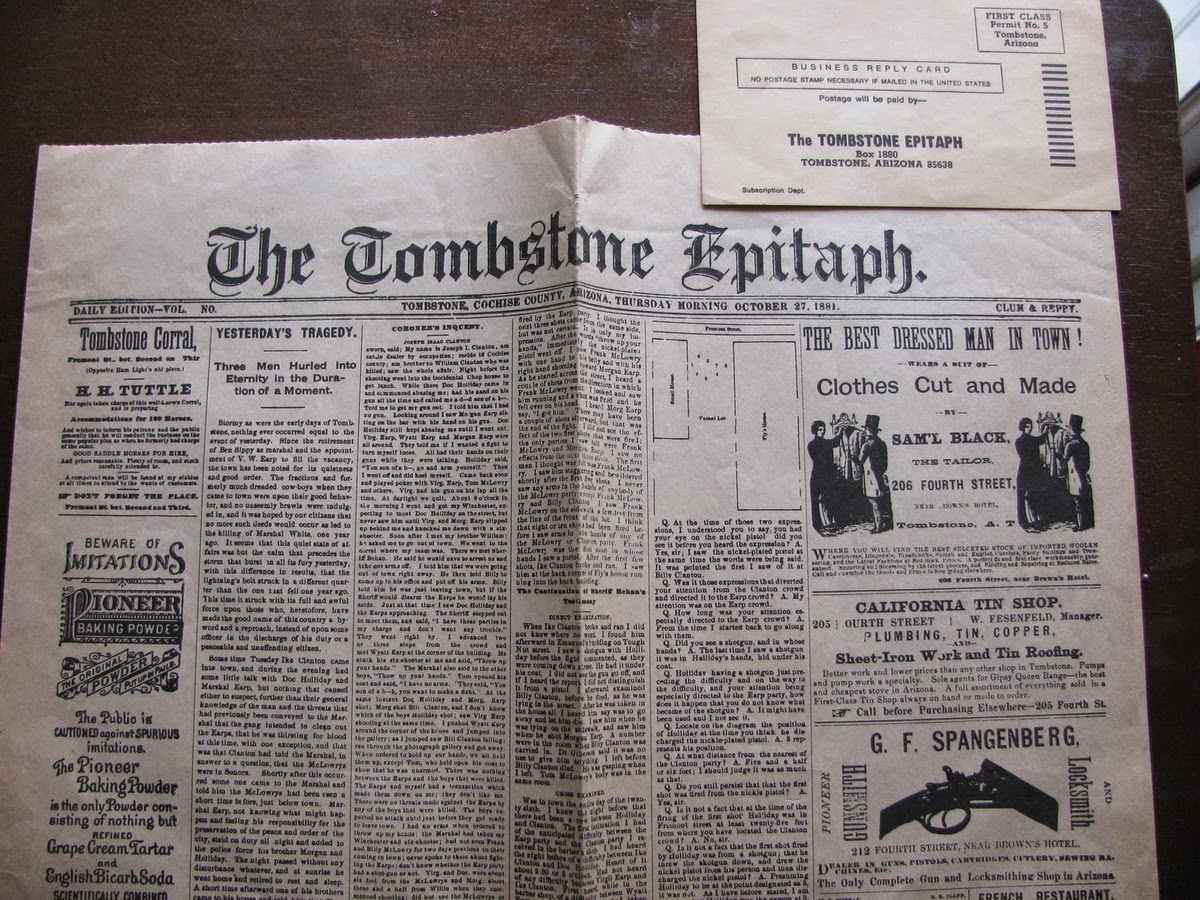