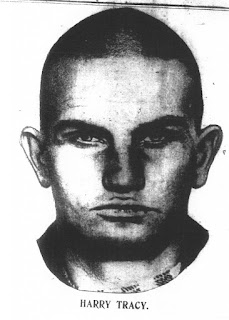 His real name was Harry Severns, but he went by and is still known today as Harry Tracy.  To many, he was a lot worse than John Wesley Hardin. And yes, certainly worse than Billy the Kid and Jesse James. Some say he was Satan himself. Yes, the Devil in human form.

On July 3rd, 1902, The Seattle Daily Times wrote, "In all the criminal lore of the country there is no record equal to that of Harry Tracy for cold-blooded nerve, desperation, and thirst for crime. Jesse James, compared with Tracy, is a Sunday school teacher."

His date of birth is put on October 23rd, 1875. And while some like to call him an outlaw in the Old West, the "Last of the Hole in the Wall Gang," and talk about him as if he were just an ordinary Old West outlaw, they misrepresent the true evil that he was.

He is said to have run with Butch Cassidy, and by the time he'd reached adulthood, he was actively taking part in acts of robbery and theft. But as many who've read about him know that he was a killer who enjoyed killing.

His first known murder was done on March 1st, 1898, when Tracy and three accomplices engaged in a gunfight at Brown's Park, Colorado. In that gunfight, Posseman Valentine S. Hoy was killed. Hoy was a well-respected cattle rancher, and soon a posse was out eagerly trying to find the man who killed him.

Browns Park was originally known as Brown's Hole. It's an isolated mountain valley along the Green River in Moffat County, Colorado, and Daggett County, Utah. As early as the 1870s, the area had gotten the reputation of being a haven for cattle rustlers, horse thieves, and other outlaws, the same as Hole-in-the-Wall in Wyoming and Robbers Roost in Utah. During its heyday, it's said that the outlaws at the time actually had an ethic that allowed for most "outlaw deeds" except for murder. Frankly, I don't believe such myths.


After the Brown's Park killing of Posseman, Hoy, Tracy, and his partner-in-crime David Merrill were captured in Routt County, Colorado. Then in June of 1898, both escaped from the Routt County Jail. Some say Tracy beat the sheriff on his way out even though he was in a hurry.

Harry Tracy married the sister of his crime partner David Merrill. Her name was Rose, and not much is known about her. It's believed they had no child together. While married, Tracy and Merrill committed numerous robberies in downtown Portland, including robbing saloons, banks, trolley cars, a drug store, and other various businesses. That took place from 1898 and into 1901. In most of those felonies, they were known to have bound and gagged their victims at gunpoint. Their two-year spree ended in 1901 when they were recaptured.
Tracy went to trial and was convicted of the murder of Posseman V. S. Hoy and sent to the Oregon State Penitentiary. A little over a year later, on June 9th, 1902, with fellow convict brother-in-law David Merrill in tow, they escaped. This escape was different because, on his way out of the Oregon State Penitentiary, Tracy killed 6 men. The six were Corrections Officers Thurston Jones Sr., Bailey Tiffany, Frank Ferrell, and three civilians.
Their escape made headlines in newspapers of the time. It's said that the size and scope of the manhunt was considered unprecedented for the times. In fact, it is considered the largest manhunt of the early 20th century. It was the most intense manhunt in the Pacific Northwest. Some called it "electrifying."

In the days following the escape, the two escaped cons headed north, stealing horses, food, and clothing along the way. Tracy and Merrill traveled over fifty miles to Portland. From there, the two men rowed by boat across the Columbia River into Vancouver, Washington. Vancouver Sheriff John Marsh was already alerted and had formed a posse of over 60 men to hunt for the escapees. They wanted to bring them in, and it didn't matter if it was dead or alive.

On June 16th, Deputy Bert Biesecker and Posseman Luther Davidson were positioned along the Salmon Creek about seven miles from the Washington state line when they spotted the two escapees just after dusk. After a standoff and trading gunfire, Tracy once again got away.

About now, you're thinking, he sounds like a bad hombre but not as bad as some. So what makes me say he was the Devil incarnate? Well, that has to do with what he did in July of 1902. You see, unlike most prison escapees who want to get as far away from the law as possible, that wasn't the case for Harry Tracy. In fact, he did the opposite and actually set up an ambush just to kill more lawmen.

Yes, it's true, on July 3rd, 1902, he set up an ambush near Bothell, Washington. It was there that he surprised and killed City of Everett Police Detective Charles Raymond and wounded King County Sheriff  Deputy John Williams.

Detective Charles Raymond was one of six lawmen shot and killed by Tracy. Detective Raymond had served with the City of Everett Police Department for ten years and was survived by his wife and five children. It's said Deputy Williams suffered physically and mentally from the trauma of the incident. He is said to have committed suicide later as a result of what took place at that ambush.

After his ambush of the two lawmen, Harry Tracy fled the scene and invaded a house where he took the occupants as hostages. He is also known to have simply sat down to eat dinner while contemplating killing them all.

As Tracy was leaving the house, he encountered other lawmen and soon started shooting. In that shootout, Tracy killed Seattle Police Officer Enoch Breece and Posseman Neil Rowley of the King County Sheriff's Department.

On August 3rd, Tracy came upon a ranch located in Creston, owned by brothers Lou and Gene Eddy. He was there for a few days when Harry Tracy's reign of terror came to a halt on August 6th, 1902.

That was the day when lawmen had him cornered in a wheat field in Creston, Washington. He was shot in the leg during an ambush by a posse from Lincoln County. Knowing that Tracy was seriously wounded in the leg, Sheriff Gardner had the field that Tracy had crawled into surrounded.

Knowing that there was no way out and a hanging was waiting for him, Harry Tracy committed suicide by shooting himself with his .30-30 rifle to avoid capture. A $4,000 reward was paid to the wheat farmers.

It is said that souvenir seekers descended on him and tore clothes from his remains, ripped hair from his scalp, and someone even stole his shoes. Harry Tracy's body was returned to Salem, where it was buried in lime outside the prison walls. His burial spot is now unknown, as nobody knows for sure where his remains are.

Harry Tracy was tracked down by several posses, Sheriffs, and City Police, for 58 days. He killed without hesitation. He was 27 when he died and was responsible for the deaths of 7 lawmen who left behind 6 wives and 19 children. He is also known to have killed at least 5 civilians and his crime partner.

As for the rest of his story, well, some have tried to say he was brave and cunning, a master at eluding the law. For me, I see Harry Tracy as just another murderer who died a coward. All bluster and no sand, he was too afraid to face a judge and jury. He was too afraid to walk-up thirteen steps to dance on the end of a hangman's noose.