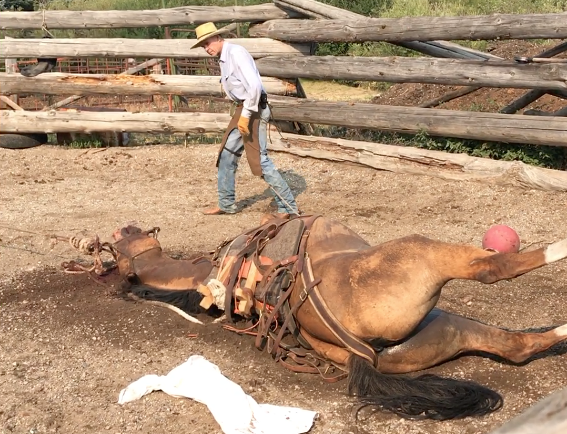 Let's talk about a horrible act of someone abusing a horse until he kills the animal in a "training session." This is as abusive as can take place because this appears to be a totally willful act. What makes this a horrendous crime is the man doing this actually appears to have did this on purpose.

This picture above is a still from a video taken by Mary Wendell Lampton. She is the neighbor of Wyoming outfitter Forest Stearns. In her video, we can clearly see Stearns with a horse that he tied up and tortured for what is believed to be at least 6 hours.

Even if that were true, then why have that pack saddle on that horse while doing it. I have been around horses since I was a little kid, and frankly I've never seen this type of torture inflicted upon a horse. And to say, at first, that he was trying to shoe the horse? While I don't know the man other than what I've read about him, it seems like he was trying to cover himself with that story after the police were called.

In the video, it's clear that he was not trying to shoe that horse. It is as plain as day, and everyone watching that video can see it for themselves, that that wasn't the case at all. What is depicted in the video is a wannabe horse trainer in the midst of torturing a defenseless animal. This incident took place earlier this month in Wilson, Wyoming, in Teton County, just a fairly short distance from Jackson Hole.

As I said before, it was reported that he actually tortured that horse over a 6 horse period of time before the horse died. Yes, in my opinion, he ultimately killed the horse because the horse died after being savagely abused. Of course, not surprisingly, Stearns is said to have also claimed that the whole thing was a "training session".

Yes, imagine that, 6 horses of inflicting horrible suffering upon a horse and then call it a "training session." And friends, I'm wondering the same thing that I'm sure you're wondering about when I first read about this, was it his horse or was it a horse that he was "training" for someone else? While abusing a horse to the point of killing it is horrible in either case, imagine if Stearns had your horse to "train"? Imagine if he killed it instead of training it?

Forest Stearns is said to be 63 years old and owns Stearns Outfitters. Remember, he told the police that he was doing what he did just to be able to shoe the horse. He said his "training session," a session of torturing that horse for 6 hours before it died, was a training technique meant to stop a horse from kicking at a farrier. Imagine that.


As asinine as the method is, some so-called "horse trainers" truly believe that this is helpful. The method involves tying a horse’s legs together and then forcing the horse to fall to the ground. Some of the so-called "trainers" who train this way have more incidents of creating injured horses in the process.

To me, in my experience, it's a fool's idea of training a horse in a supposed "old way" of doing things. I've often wondered if these same people believe in other things that have been found to just to scar and horrify a horse for life. Or frankly, will kill a horse.

There are horribly abusive training method that people attribute to the "old days" that should never be used. For example, one method where a horse is called "hang-tying." This is where a horse is literally handed by a halter over night away from food and water. The ignorant gunsels who do this believe that this breaks a horse's spirit and makes a horse less resistant to training.

Of course, there are those who believe that a training session means riding, or longeing, a horse to exhaustion to get the "fresh" out of a horse. The horse is put on a line, runs around like an idiot until they are worn out and winded. The idea is to get a horse in a working frame of mind. But lunging is a training method that we should use establish parameters before we step into a saddle, not exhaust the horse.

Some wannabe trainers believe in excessive spurring, especially with so-called "rock grinders" spurs with sharp rowels. Some believe in jerking on a horse's mouth used a severe bit such as a twisted-wire snaffle to causing injury to the tongue, bars, or lips. And along with that is those who like the horrible method jerking on a shank when a chain is used over the face or in the mouth. And then there's the bit method called "bitting up" where a horse is left to stand withholding water to create submissiveness. And yes, there are those who really believe that starving a horse into weakness is a way of getting a horse to "submit".

Then there are those who simply think that they can whip and beat terror into a horse to get it's cooperation. We've all heard stories of these same sorts of peole hitting a horse in the head with a can or a stick or even a board. And yes, I've personally seen some of these types of so-called trainers get so angry and frustrated with a horse that their "training session" turns into a "whoop ass session" as one trainer put told me once.

I'm old enough to have seen some great "Old School" methods that were gentle and effective ways training horses. That's why I know that a real trainer, one conscious of the horse's safety and keeping the horse's spirit in tack, doesn't use "Old School" techniques that are just plain animal cruelty. Horse "training" should not mean abusing a horse to the point were the trainer ends up having to put the horse down because their training session was so extremely severe.

And as for these people who say they have to "break a horse's spirit," I think they are wrong. Besides conformation, age, and what training a horse may or may not have had, my grandfather taught me to look for a horse with spirit and drive when buying a horse. He wanted me to look for horses that can connect with a rider and doesn't quit when needed to move cows all day.

Some of the wannabe trainers out there believe that a horse's spirit should be broken. What they don't seem to understand is that there is a difference between a horse that submits to ques and commands, and a horse which has had it's spirit broken.

Most intelligent trainers take the good ways that took place back in the day and combine them with more modern techniques. Most real trainers understand how truly cruel this is and won't do it. Most will take from the old school and the new, and will not use such an unacceptable, unnecessary and cruel method of training.

To me, after watching the video, Stearns may be a sadist who receives pleasure from inflicting harm on people and animals. For someone to do what he did for 6 hours is sinful, if not criminal. And no, I'm not writing his actions off to his ignorance.

According to what I've researched, Stearns has been around horses for many years. So knowing that he is not some idiot novice who watched the movie "Horse Whisperer" one too many times and now thinks he's a horse trainer, he must have known real well that he went beyond training and was torturing the horse.

Let's be real frank here, anyone who has spent any real time around horses knows real well that training a horse is an on-going process. Horses don't just learn in formal training sessions, they are experiencing training whenever you interact with your horse. Yes, for better or worse, every time you deal with you horse, you're doing training. And that in itself is why we all need to pay attention to what our horses are doing.

As for a gentle reprimand for misbehaving, remember that what most call "rank" horses are really just horses that have been allowed to behave badly. And no, no matter what a movie may try to depict as reality, fact is there are no quick fixes or one size fits all training. Every horse is different, and some take more training and longer training sessions for things to sink in.

Horses are all different, and most real horse trainers, reputable horse trainers, know that. So subsequently, they usually limit periods of really intense training to 20 to 30 minutes. Sometimes less depending horse the horse is responding to the what they are being taught. Believe it or not, sometimes shorter training sessions are better because it keeps a horse focused and interested in what's taking place.

Remember, before the session starts there is a short few minute warm-up period and after the session ends there is the 10 minute or so cool down period. A session that's now very intense should be anywhere for 30 to 40 minutes or shorter. Working a horse for an hour in a training session is a very long time.

Anyone working horses, training them, knows that it is absolutely important to always end the training session on a good note. Yes, that is true even if the horse wasn't cooperating as much as you wanted that day. Another must is to finish a training session doing something that the horse does real well. Even if it is considered something minor, ending a session on a good note breeds confidence in the horse.

As far as getting angry, my grandfather taught me that the only emotion I should ever have during a training session is "patience". So, with my knowing what I've been taught since I was old enough to walk, I'd say 6 hours of "training" a horse using cruel and inhumane treatment is a totally unacceptable.

Forest Stearns is under investigation by the Teton County Sheriff Department for possible animal cruelty in the case. And no, this is not the first time Stearns has had problems when it comes to abusing horses. In fact, from what I've read, he has been reported regularly for abusing horses. And also, he has an police record that shows that he was arrested and booked for drunk driving three years ago. He also has been under investigation by the police for family battery.

And while some are now asking if ' idea of training techniques is legal or not, legal or not what he was doing wasn't humane in the least bit. I've watched the video a number of times to see if there was any sort of excuse for this. Frankly, his behavior is uncivilized.

The Teton County Sheriff’s Office is investigating Forest Stearns after the video of him torturing that horse was posted on the internet. Forest Stearns, owner of Stearns Outfitters in nearby Wilson, is being investigated for cruelty to animals. Sadly, what Stearns did is only a misdemeanor in the state of Wyoming.

After you watch it, ask yourself why he is not in jail? Maybe the Teton County Sheriff can explain why he has not done anything about this? Ask him if he's simply writing this sort of behavior off as that's how things are done in Teton County, Wyoming?

If it is, it's certainly not the Cowboy way of doing things!