So Long Hopalong Cassidy -- A Poem By Don McLean 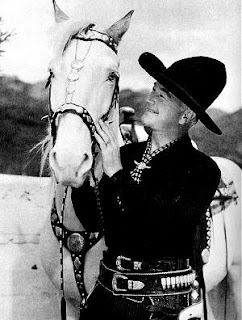 Like many many others, I marveled at the lighting speed of The Rifleman, I admired the go it alone knight for hire Paladin in Have Gun Will Travel, I laughed at the cowardly antics of Brett and Bart Maverick, and I loved Zorro's skill with a sword and his black horse Tornado.

While I will do a more extensive post on William Boyd, I wanted to share this with you. It's a poem. In 1971, poet song writer Don McLean came out with a song titled American Pie. What people may not know is that McLean was a fan of Hopalong Cassidy. He wrote the poem below to William Boyd's famous Hopalong Cassidy. The poem first appeared on the inside record sleeve of the American Pie album.

Here's Don McLean’s poem to Hopalong Cassidy which was included on the inside cover of the American Pie album in 1971.

No matter how scary life got I could depend on you
You had that easy smile and white, wavy hair
You were my favorite father figure with two guns blazing
Not even Victor Jory could stand up to those 44-40s you packed
And that stallion you rode, I think his name was Topper
He was so beautiful and white he even came when you whistled
I’ve always liked black and I loved your clothes
Black hat, black pants, and shirt
Silver spurs and two guns in black holsters with pearly-white handles
Black and white, that was you Hoppy
The bad men fell the good guys lived on
The ladies touched your hand but never kissed
Whenever John Carradine asked a question you’d say
“That comes under the heading of my business”
Then you’d call for another sarsparilla
I believed in you so much that I’d take my Stetson
off and put it over my heart whenever anybody died
My hat’s off to you, Hoppy
Say good-bye to all the boys at the Bar-20
The black and white days are over
So long Hopalong Cassidy

Hopalong is a symbol of a simpler time, a time less complicated, a time of clear black and white values. Hoppy was a defender of the weak, and didn't put up with outlaws. He was honest, tough, virtuous, smart, and resourceful. He was the sort of person that Americans strive to be in that he knew himself and wasn't about to sacrifice who he was for love or money. I believe most Americans are like that, or want to be like that.