Attempted Murder In The Senate 1856 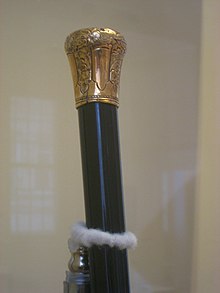 Think things are getting rough with all of the name calling and such in our nation's capital today? Well, imagine what took place in the 1850s.

It was decided that not even the slightest attack, the slightest insinuation of an assault on the character of others in the Senate, would be tolerated. But, that didn't stop Democrat Representative Preston Brooks from brutally beating Republican Senator Charles Sumner as a result of Sumner's speech attacking the pro-slavery policies of the Democratic Party.

While verbal assaults in Congress have been a part of our Republic since the beginnings of our nation, Republican Senator Charles Sumner of Massachusetts wasn't prepared to be physically attacked by a Democrat in retaliation over a speech that Sumner gave over a two day period.

The incident actually took place on May 22nd, 1856. Charles Sumner's speech was an attack on slavery and slave-owner Democrats. Of course while it was about Sumner criticizing slavery and its practitioners, the attack was also about Sumner naming names of slave-owners in his speech. One of the slave-owners mentioned in that speech was Democrat Senator Andrew Butler of South Carolina. He was the cousin of Representative Preston Brooks.

While there is nothing notating the reaction of Butler to Sumner's speech delivered on May 19th and 20th on the Senate floor, when Representative Preston Brooks over in the House found out out about Senator Sumner's speech attacking slavery and slave-owners, specifically his kin, Brooks wasn't very happy about it all. In fact, Brooks felt duty bound to stand up for his family's honor. It's said that after the attack, others who saw Brooks as standing up for the honor of the South actually sent Brooks more canes.

The incident became known as the "Caning of Charles Sumner" or the "Brooks–Sumner Affair." The attack has been considered one of many events that seriously broke-down our ability to conduct reasoned communication and compromise prior to the Civil War.

Sumner speech was to denounce the Kansas–Nebraska Act of 1856. His speech was titled Crime against Kansas. His speech argued for the immediate admission of Kansas as a free state and went on to denounce slavery and what he called "the political arm of the slave owners." Sumner believed it helped the Democratic Party with numbers of "constituents".

During his long speech, he also attacked the authors of the Kansas–Nebraska Act of 1856. They were Democrats Senators Andrew Butler of South Carolina and Stephen A. Douglas of Illinois.

Sumner equated slavery to a mistress that Butler was smitten with. As he put it, the "Senator from South Carolina has chosen a mistress to whom he has made his vows, and who, though ugly to others, is always lovely to him; though polluted in the sight of the world, is chaste in his sight—I mean the harlot, slavery. For her his tongue is always profuse in words. Let her be impeached in character, or any proposition made to shut her out from the extension of her wantonness, and no extravagance of manner or hardihood of assertion is then too great for this senator."

Sumner stating that Butler was a chief defender of slavery was not without merit. Fact is, Andrew Butler was a proponent of slavery and was in fact a slave owner. This sort of back and forth in Congress has always taken place. Sumner himself was earlier ridiculed and insulted by Butler and Douglas over Sumner's opposition to the Fugitive Slave Law and the Kansas-Nebraska Act.

Butler is said to have called out Sumner on the Senate floor while making crude sexual innuendo about Sumner and black women. It's said that Democrat slave-owners routinely accused Republican  abolitionists of wanting to free black women for sex and to promote interracial marriage.

Besides the subject of slavery, Sumner is said to have mocked Butler's speech patterns which had been impeded by a recent stroke. That also didn't sit well with Brooks. Representative Preston Brooks, Butler's cousin, later said that he intended to challenge Sumner to a duel. He even consulted fellow South Carolina Representative Laurence M. Keitt on dueling etiquette and what was needed to shoot Sumner.

Representative Keitt told Brooks that "dueling was for gentlemen of equal social standing, and that Sumner was no better than a drunkard."

With that, Brooks is said to have seen Sumner as no gentleman. Since Sumner did not deserve any sort of honorable treatment, Brooks figured that he did deserve a beating. A beating to humiliate him. That's why Brooks beat Sumner with a cane in public. It was meant to humiliate Sumner.

As for the day of the attack, Congressman Keitt and Virginia Congressman Henry A. Edmundson backed up Brooks with pistols to make sure there were no interference while Brooks beat the tar out of Sumner. Image that!

And by the way, it was not a spontaneous attack to avenge his family's honor. In fact, it was a very well planned out attack. Fact is, Congressmen Keitt and Edmundson supported Brooks' plan of whipping Sumner.  In their plan, the three Congressmen actually waited for the galleries to clear, making sure that all of the women were gone before they would act. It was considered dishonorable to ambush someone in the presence of ladies. In fact, it was considered bad form to let ladies witness such an act.

So after the women left, in what really was an almost empty Senate chamber, Brooks walked up to Sumner as he sat at his desk and said in a low voice, "Mr. Sumner, I have read your speech twice over carefully. It is a libel on South Carolina, and Mr. Butler, who is a relative of mine."

As Sumner began to stand up and before Sumner could reach his feet, Brooks struck Sumner on the head and face with a thick gutta-percha cane with a gold head. The force used in his blows are said to have shocked and actually blinded Sumner. Yes, blows were so serve that Sumner actually lost his sight almost immediately.

Later Sumner said, "I no longer saw my assailant, nor any other person or object in the room. What I did afterwards was done almost unconsciously, acting under the instincts of self-defense."

Knocked down, Sumner was trapped under his desk that was bolted to the floor. Because Sumner's desk chair was on a track and pulled up to his desk, the way Sumner fell pinned him between the desk and the chair -- completely defenseless as Brooks kept beating him.

To Sumner's credit, he finally got to his feet and believe it or not ripped his desk from their bolts in the floor -- all in a valiant effort to get away from Brooks who was mercilessly beating him. While Brooks said later that he wanted to humiliate Sumner, for all intents and purposes during the attack it was believed that Brooks was trying to kill Sumner. Yes, kill him to make a point that that would be the fate of any Republican fighting slavery.

Blood poured down his face which actually blinded Sumner as he slowly tried to get away from the barrage of blows coming from Brooks. Besides his head, Sumner would later bear wounds of the assault because of the blows that he tried to block with his arms. It's said that Brooks followed Sumner up the aisle, beating him the whole way. Brooks later said he intended on beating Sumner "across the head, face, and shoulders to the full extent of my power."

When Brooks finally broke the cane during his beating of Sumner, Brooks didn't stop. He actually used the gold head of the cane to strike and gouge at Sumner.

Brooks said, Sumner bellowed like a calf" when he finally went out. But Brooks wasn't done.

Democrat Representative Preston Brooks sense of honor must have completely escaped him since he's said to have grabbed the falling Sumner, held him up by the lapel with one hand, and continued to beat him with the gold cane tip.

So now you're wondering, why didn't others stop what took place? It's said that while several of the other Senators there actually tried to step forward to stop the attack, they were blocked by Congressmen Keitt and Edmundson. In fact, Edmundson and Keith draw canes and then their pistols to stop others from interrferring in the ambush.

At one point, Keitt who had a pistol pointed at the Senators is said to have shouted, "Let them be! Let them alone, God damn you, let them alone!"

At one point it looked at though South Carolina Representative Laurence M. Keitt was going to shoot and murder Kentucky Senator John J. Crittenden when the Kentucky Senator tried to stop what was taking place. It's believed that an angry Congressman Laurence M. Keitt would have shot and killed Crittenden if it weren't for Georgia Senator Robert Toombs. Toombs who would later be one of the organizers of the Confederacy, stopped Keitt from killing Crittenden. Toombs then stopped Brooks from killing Sumner though he later said it wouldn't have disappointed him if Brooks had.

While Sumner was beaten close to death and after the ordeal needed to be hospitalized, Brooks actually hit himself above his right eye in the process and needed medical attention before leaving the Capitol.

As for the cane itself? Believe it or not, its gold cap made it into a museum. As for the rest of it, many of the Southern lawmakers made rings out of other pieces that Congressman Edmundson picked up off the blood soaked Senate floor. The Democrat lawmakers wore those rings around their necks as a symbol of support for slavery and their fight to keep it. Of course, pro-Democrat newspapers celebrated the attack as a victory for pro-slavery while pro-Republican newspapers reported the attack as an assault on free speech.

So yes, Democrat Representative Preston Brooks of South Carolina walked into the Senate chambers and up to Sumner who was at his desk putting stamps on his speech to send it to his constituents. Brooks used a cane to attack Sumner viciously. The beating is said to have almost killed Sumner, yet Democrats treated fellow Democrat Congressman Preston Brooks of South Carolina as a hero in much of the pro-slavery South. Brooks was treated like a celebrity after nearly killing Sumner.

What I find interesting is that while Keitt was censured by the House for using a pistol to help the attack along, Brooks received no official censure from the House of Representatives. In fact, he not only did not receive a censure but his fellow Democrats immediately started looking at Preston Brooks as a possible Democrat candidate for the presidency.

As a result of that attack, what some described as the attempted murder of Sumner in the Senate, members in both the House and the Senate started carrying hideout guns to protect themselves. And while Brooks had admirers who saw him as a courageous hero of Democrat slave-owners in the South, there were Republicans who didn't see him that way at all. In fact, one Republican who would become famous in his own right publicly challenged Brooks to a duel. Not just once, but a few times. A challenge that Brooks shirked because he knew he would be killed.