The Truth About Slavery In The United States 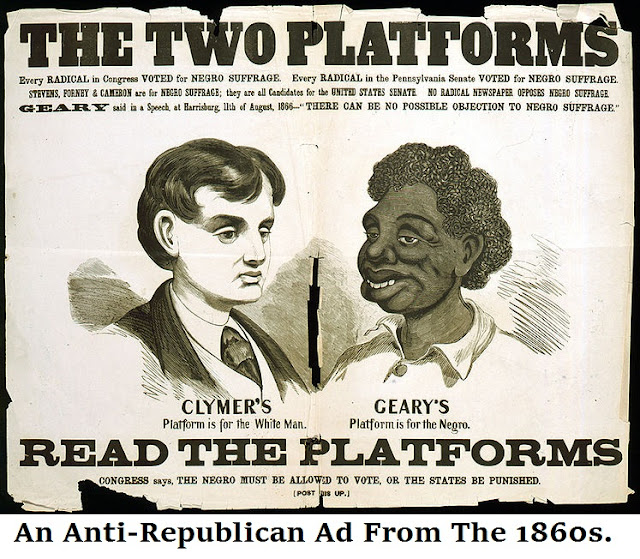 Of the 10 to 12 million black African slaves who were brought to the Western Hemisphere, it's believed that 4% of the slaves sold into bondage by their African Chiefs ended up in North America. The vast majority of African slaves were transported to South American countries.

When people say there has been slavery in the United States for 400 years, they are either liars or stupid and don't know history. The English, French, and Spanish owned slaves in North America before there was a nation known as the United States.

I'm amazed to hear how many Americans today are under the misconception that Democrats have been an anti-slavery party while also believing that Republicans are the party of slavery. The Republican Party was created in 1854 as an abolitionist party. Their focus was on abolishing slavery. President Abraham Lincoln was a Republican who vowed to end slavery. President Lincoln's Emancipation Proclamation freed the slaves in 1863.

People can vilify President Lincoln by attempting to paint  him a hypocrite because he once said in a letter that he would keep slavery if it meant preserving the union. I see him changing his stance regarding slavery when he realized that there was no stopping states from seceding. Besides, his Emancipation Proclamation trumped any of his rhetoric by his actually freeing slaves. And whether some like it or not, it is a historical fact that President Lincoln's Emancipation Proclamation is the pivotal moment in American history when the black slaves were freed.

The 13th Amendment which was the law ending slavery did not pass the Republican controlled Congress until two years later on January 31, 1865. It was ratified in December of 1865, well after President Lincoln was murdered on April 15, 1865. As for his assassin, he was an actor by the name of John Wilkes Booth, who was a Democrat, a radical left wing anarchist.

In contrast to what the Republicans were doing from their start in 1854, the Democratic Party which was established in 1829 actually took the nation to Civil War from 1861 to 1865 in part over their desire to keep slavery intact. After the Civil War, the Democratic Party created the Ku Klux Klan to terrorize freed slaves and Republican administrators during the Reconstruction Era. Democrats in the South murdered and lynched blacks and Republicans. Democrats created segregation and Jim Crow laws.

So where does the misinformation come from? Well, in some cases, it's simply not looking at the facts. In other cases, it's our taking technically correct statements at face value without looking into them. For example, we know that the importation of African slaves into the United States lasted a period of 26 years after our Constitution was ratified, and that slavery in the United States was legal from 1783 to 1865. But there's a problem with the later statement.

Also, folks don't usually mention The Northwest Ordinance of 1787 which was passed just before our Constitution was ratified. That act prohibited slavery in the federal Northwest Territory. The six states that were created from the Northwest Territory were Ohio (1803), Indiana (1816), Illinois (1818), Michigan (1837), Wisconsin (1848), and Minnesota (1858). All forbid the owning of slaves from their conception. All came into the United States, as part of our union of states, as "free states" long before slavery officially ended in the South in 1865. None of those states ever had slaves.

The same goes for the state of Maine which became a free state, meaning it did not allow slavery, when it was admitted to the United States as part of the Missouri Compromise of 1820. The same with California when it became a state in 1850 as a "free state." And yes, the same took place with Oregon in 1859, Kansas in 1861, and Nevada in 1864. Those states never ever had slavery to begin with. Subsequently, when the Civil War broke out in 1861, their slave populations were zero.

When we break down the 33 states and 10 organized territories present in 1861 at the beginning of the Civil War, we find that 10 states never had slaves in the history of those states, 8 former slave states did not have slavery for more than 50 years, 15 states were still slave states and they were primarily in the South, 9 U.S. territories did not have slaves, and there were 15 slaves listed as living in the Nebraska Territory.

Here's something else. To say that only whites owned slaves in the United States is not true. Fact is, while the vast majority of slave owners were in fact whites with European ancestry, there were blacks and even Native American slave owners.

Whether or not people want to admit the truth of what took place, the blame for slavery is not one simply owned by whites. In fact, long before the United States won its independence from England, there were black slave owners.

One of the more famous black slave owners in the British Colonies was Anthony Johnson. He was supposedly born around 1600 and died in 1670 which was over a hundred years before the United States declared its independence from England in 1776.

Johnson was a black man who gained his freedom as a slave. He gained wealth as a merchant. He then became a slave owner in the Colony of Virginia. It is said that he owned over 400 black slaves. And today, Johnson is recognized as being one of the first African-American property owners on the North American continent.

He is also said to have had his right to legally own black slaves recognized in a Virginia court of law. Known as a successful merchant and tobacco farmer, Johnson has been referred to as "'The Black Patriarch" because he was one of the first African slave owners in North America.

While Johnson was a British subject, one of the most famous American black men to own black slaves in the United States was a man by the name of William Ellison Jr. of South Carolina. By age 21, Ellison took money that he got from his slave master to buy his own freedom. He also took what his master taught him and used that knowledge of machinery to make cotton gins while also working as a blacksmith. Later, he acquired over 1,000 acres and became a planter. He did in fact own 53 black slaves. In fact, he is ranked as the largest of the 171 black slave owners in South Carolina history.

We have to remember that slavery was nothing new to Native Americans. For a thousand or more years before the Europeans ever step foot on North American soil, tribes have waged genocidal war against each other. While most tribes believed in killing the men and boys of the enemy tribes, they all took slaves as spoils of war.

And while some think this sort of genocidal warfare was simply an isolated occurrence between a few tribes, there is evidence that such warfare was conducted all across the North American continent as far north as Alaska for more years than most realize. And yes, along with such warfare was the taking of slaves as spoils. But when it comes to Africans slaves, Native American tribes bought them.

The Five Civilized Tribes (Cherokee, Choctaw, Chickasaw, Creek, and Seminole) were huge slave owners. In fact, when they were forced to leave their lands following the Indian removal of the 1830s, those tribes went on the Trail of Tears to present-day Oklahoma bringing their black slaves with them.

Let's be honest, Native American Indian slave masters is not what we all think about when we think of the Trail of Tears. But sadly, there's no denying that's part of took place.

In an interview a few years ago, National Museum of the American Indian curator Paul Chaat Smith, who himself is Comanche, said, "The Five Civilized Tribes were deeply committed to slavery, established their own 'racialized black codes,' immediately reestablished slavery when they arrived in Indian territory, rebuilt their nations with slave labor, crushed slave rebellions, and enthusiastically sided with the Confederacy in the Civil War."

He went on to say, "the truth is about as far a cry from a crowd-pleasing narrative as you could possibly get. Do you want to hear that? I don’t think so. Nobody does. ...

The Cherokee owned slaves for the same reasons their white neighbors did. They knew exactly what they were doing. In truth, Civilized Tribes were not that complicated. They were willful and determined oppressors of blacks they owned, enthusiastic participants in a global economy driven by cotton, and believers in the idea that they were equal to whites and superior to blacks."

To sum this up, we know that by the Civil War most of the states were slave free. We know that slavery was legal in the United States for a total of 82 years from 1783 to 1865. We know that more than just whites owned slaves. We also know that as is the case with most all white Americans, most Native Americans did not own slaves. In fact, slave owners of any color were only a small handful of the wealthy during that time period.