It Was Hell On Earth: Andersonville Prison

Camp Sumter, which is better known as Andersonville Prison, was established in February of 1864 and served the Confederacy until May of 1865. As a Confederate prisoner-of-war camp, it was used to hold about 45,000 Union prisoners during the final fourteen months of the Civil War. When first opened, it was only about 16.5 acres in size. Less then four month later, it was enlarged by 10 acres. The stockade walls were 15 to 16 feet high. It was 1,620 feet by 779 feet in size. Imagine putting 45,000 men to live in area that small.

As for it's infamous "Dead Line," a small fence known as "the dead line" was erected about 19 to 20 feet inside the stockade wall to keep the prisoners away from the stockade walls. That 19 to 20 foot area was considered a "No-Man's Land." It's said any of the prisoners who simply touched the "dead line" was shot without warning by Confederate sentries in the guard platforms which were called "pigeon roosts."

The prison was commanded by Confederate Army Captain Heinrich Hartmann Wirz. At the outbreak of the Civil War in 1861, Wirz who was married and 37 years-old, enlisted in the Confederate Army near his Madison Parish, Louisiana, home. He enlisted as a private in Company A, Madison Infantry, 4th Battalion of Louisiana Infantry.

There are a couple of conflicting versions as to how Wirz became a Confederate Army Captain. On version says that he was wounded and cited for bravery, spent three months of rehabilitation at his home, before being promoted to Captain on June 12, 1862. Supposedly, because of his wound, it's said he was assigned to the staff in charge of Confederate prisoner-of-war camps.

Another account says that he was promoted to Captain by Confederate President Jefferson Davis before sending him to Europe as a courier to take dispatches to Confederate Commissioners James Mason in England, and John Slidell in France. Supposedly, Wirz returned from Europe and began working on the staff in charge of Confederate prisoner-of-war camps.

In February of 1864, the Confederate government established Camp Sumter which was intended to hold only 10,000 Union POW in barracks. When Wirz arrived at Camp Sumter, no barracks were being built simply because the Confederacy didn't have the funds to build them. Instead, the prisoners were housed in the open.

The prisoners gave this place the name "Andersonville", which became the colloquial name for the camp. It soon filled to over 32,000 at its peak. Of course over it's lifespan, it would see about 45,000 Union troops confined there. Severe overcrowding made sanitary conditions completely out of the question. Water was not available, there was a lack of food, and medical treatment and supplies was pretty much non-existent.

It's said Wirz recognized that the conditions were inadequate and petitioned his superiors to provide more support, but his requests were denied. The Swiss born Confederate officer was 41 years old when he was later tried and executed after the war for war crimes committed at Andersonville prison. In reality, he was executed for conspiracy and murder relating to his command of the camp.

While Wirz was charged and hanged for what took place there with its overcrowding at four times its capacity, its inadequate water supply, lack of food, and unsanitary conditions, Wirz received little to no support from the Confederate government in terms of food, water, and medical supplies. So yes, the Confederacy itself bears a great deal of responsibility for the death toll at Andersonville.

And please, don't think it wasn't a hellish place. Among the dead that were left in place for days, the filth and the disease, the only source of drinking water was from a creek which also served as the camp's latrine. It said that it was filled with fecal matter from thousands of sick and dying men.

Of the causes of death at Andersonville, there were many, including:

Of the approximately 45,000 Union prisoners held there over a period of 14 months during the war, nearly 13,000 died. That's 13,000 deaths in just 14 months. The majority died of scurvy, diarrhea, and dysentery. And during its worst months, over 100 men died each day.

As for lack of food, by 1864, the entire Confederacy was in dire straits when it came to food and supplies. Some might not realize it, but because of the Union blockade of sea-ports, Union attacks on the South's food producers, and their attacks of the South's supply-lines, the Confederacy was starving by 1864.

So while there was a lack of food for the prisoners, it was not that much better by then for the Confederate personnel guarding them or the Confederate Army as a whole. And think about this, how would anyone justify taking prisoners more rations when the general population of most Southern cities which were shelled into ruins were actually starving. For example, just a year earlier during the Siege of Vicksburg -- it's said the people there were eating rats to get by.

As for attempted escapes, Confederates after the war testified that 351 prisoners escaped through tunnels. The Union Army knew of less than 40 that made their way back to Union lines. It there were 351 POW who made it out, no one really knows if they returned home without notifying the Union Army, or if they simply died. Most believe they simply died.

Remember, these men were weak from starvation and escape was fairly impossible because of their poor health. If a prisoners was caught trying to escape, the small rations they were already getting was cut, they were put working in chain gangs, or simply shot and killed. And believe it or not, the prisoners played dead as a way to escape.

Because the dead amounted to around a hundred per day, some of the dead were not moved for days. Of those moved, the guards found that some of the prisoners would pretend to be dead to be carried out to the row of dead bodies outside of the walls. It's believed that as soon as night fell the men would get up and try to get away. Because of their poor health, those who tried it usually didn't make it. It's said when Captain Wirz found out about the prisoners playing dead, he ordered all of the dead to be examined by surgeons before any of the bodies were taken out of the camp. This backed up the dead in the camp, which of course created more disease. 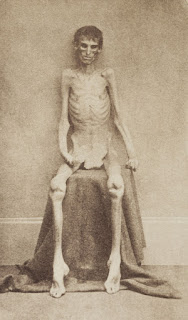 As for the clothing of the dead, because their clothing was often falling to pieces, clothing was often taken from the dead. John McElroy, a POW who survived Andersonville, later wrote, "Before one was fairly cold, his clothes would be appropriated and divided. And I have seen many sharp fights between contesting claimants."

Uncooked food was eaten because very little wood was given to the prisoners for warmth or cooking. This, along with the lack of utensils, made it almost impossible for the prisoners to cook the meager food rations they received, which consisted of poorly milled cornflour. Because of that, during the summer of 1864, Union prisoners suffered greatly from hunger, exposure and disease. Within seven months, buried in mass graves were those who died.

All in all, survival for a prisoner in Andersonville really depended on who one knew. It's said a prisoner with friends inside Andersonville was more likely to survive than a loner. Prisoners with friends could get some food even if it were meager, clothing even if it were off the dead, have shelter in the way of sharing a tent, moral support, traded for their needs, and of course had protection against other prisoners who would kill to stay alive.


That bring us to a group of POWs who called themselves the "Andersonville Raiders". Those were prisoners who attacked their fellow inmates to steal food, clothing, shoes, and anything else of value. They resorted to primitive alliances and used primitive weapons such as clubs to kill to get what they wanted.

To combat the Andersonville Raiders was a group that called themselves "Regulators". It's said they caught all of the Raiders, and tried them in a make-shift court run by a Regulators' judge in front of a jury selected from the prisoners. That jury, upon finding the Raiders guilty, set punishment that included being beaten, being stoned or flogged, running the gauntlet, spending time in the stocks, being sent to the guards to be outfitted with a ball and chain. And yes, it's recorded that in at least a half a dozen cases, Andersonville Raiders were hanged.

"They die now like sheep, fully a hundred each day. New prisoners come inside in squads of hundreds, and in a few weeks are all dead. The change is too great and sudden for them."


Union Army Sergeant Major Robert H. Kellogg of the 16th Regiment Connecticut Volunteers, wrote about his time as a POW starting in May 2, 1864. He wrote:

As we entered the place, a spectacle met our eyes that almost froze our blood with horror, and made our hearts fail within us. Before us were forms that had once been active and erect;—stalwart men, now nothing but mere walking skeletons, covered with filth and vermin. Many of our men, in the heat and intensity of their feeling, exclaimed with earnestness. "Can this be hell?" "God protect us!" and all thought that he alone could bring them out alive from so terrible a place.

In the center of the whole was a swamp, occupying about three or four acres of the narrowed limits, and a part of this marshy place had been used by the prisoners as a sink, and excrement covered the ground, the scent arising from which was suffocating. The ground allotted to our ninety was near the edge of this plague-spot, and how we were to live through the warm summer weather in the midst of such fearful surroundings, was more than we cared to think of just then.

Andersonville was liberated in May of 1865. Over the next months, news of the hellish conditions at Andersonville would come forward. As news of the death camp reached the newspapers, Northerners were outraged at the South.

Famed American poet Walt Whitman summed up the feelings of all after hearing of the miserable conditions and high death rate in the camp. He wrote, "There are deeds, crimes that may be forgiven, but this is not among them."

Today, the Andersonville National Historic Site, located near Andersonville, Georgia, preserves the former Confederate prisoner-of-war camp. The National Prisoner of War Museum opened in 1998 as a memorial to all American prisoners-of-war. The cemetery there is the final resting place for the Union prisoners who died while being held at Andersonville as POWs. It's said to contain 13,714 graves. Of those, 921 are marked "unknown".

The prisoners' burial ground has been made a National Cemetery. And while I as a Veteran would never think of being interned there, because it is a National Cemetery, it's also used as a burial place for more recent veterans and their dependents. Imagine that.