The Life of Thomas Archer 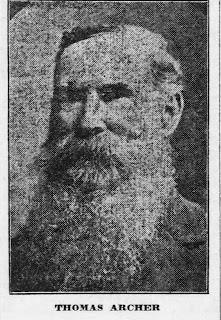 While I've written about people like Wyatt Earp, Doc Holliday, and Wild Bill, here is a story about an American who I believe is a great deal more impressive than the three men I mentioned. His name is Thomas Archer. And since there's a good chance that you have never heard of him, I'm here to tell you about him. I hope you find him as interesting as I do.
Thomas Archer was born near Louisville, Kentucky, on July 18, 1833. He was in Kentucky for less than a year when his parents E. B. and Eliza Allen Archer, moved their family to Missouri in 1834. At the age of 17, Thomas Archer moved out of the family home and left for Pittsfield, Illinois, where he lived for about three years before returning to Missouri. In 1857, Thomas arrived in Topeka, Kansas, and found a job in a brickyard.
During the late 1850s, abolitionist John Brown was operating his part of the "underground railroad" moving escaped slaves to freedom in the North. The town of Topeka was one of the "stations" when the underground railroad was in operation, and Thomas Archer worked with John Brown to make it happen.