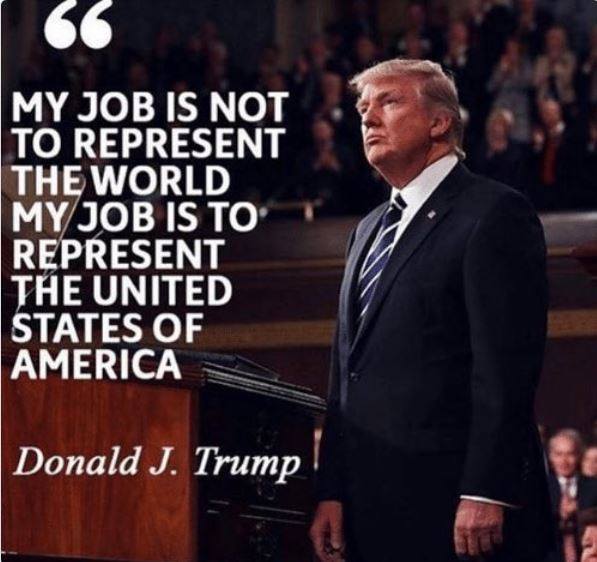 Affordable and high-quality Child Care for American workers and their families.
Advanced apprenticeship career pathways to good-paying jobs.
Advanced women’s economic empowerment.
Ensured American leadership in technology and innovation.
Preserved American jobs for American workers and rejected the importation of cheap foreign labor.
Life-Saving Response to the China Virus
Restricted travel to the United States from infected regions of the world.
Acted early to combat the China Virus in the United States.
Re-purposed domestic manufacturing facilities to ensure frontline workers had critical supplies.
Replenished the depleted Strategic National Stockpile.
Created the largest, most advanced, and most innovative testing system in the world.
Pioneered groundbreaking treatments and therapies that reduced the mortality rate by 85 percent, saving over 2 million lives.
Brought the full power of American medicine and government to produce a safe and effective vaccine in record time.
Prioritized resources for the most vulnerable Americans, including nursing home residents.
Supported Americans as they safely return to school and work.
Rescued the American economy with nearly $3.4 trillion in relief, the largest financial aid package in history.
Great Healthcare for Americans

Empowered American patients by greatly expanding healthcare choice, transparency, and affordability.
Issued unprecedented reforms that dramatically lowered the price of prescription drugs.
Promoted research and innovation in healthcare to ensure that American patients have access to the best treatment in the world.
Protected our Nation’s seniors by safeguarding and strengthening Medicare.
Remaking the Federal Judiciary

Appointed a historic number of Federal judges who will interpret the Constitution as written.
Appointed three Supreme Court justices, expanding its conservative-appointed majority to 6-3.
Achieving a Secure Border

Secured the Southern Border of the United States.
Fully enforced the immigration laws of the United States.
Ended asylum fraud, shut down human smuggling traffickers, and solved the humanitarian crisis across the Western Hemisphere.
Secured our Nation’s immigration system against criminals and terrorists.
Protected American Workers and Taxpayers
Restoring American Leadership Abroad
Restored America’s leadership in the world and successfully negotiated to ensure our allies pay their fair share for our military protection.
Advanced peace through strength
Renewed our cherished friendship and alliance with Israel and took historic action to promote peace in the Middle East.
Stood up against Communism and Socialism in the Western Hemisphere.
Colossal Rebuilding of the Military
Rebuilt the military and created the Sixth Branch, the United States Space Force.
Defeated terrorists, held leaders accountable for malign actions, and bolstered peace around the world.
Addressed gaps in American’s defense-industrial base, providing much-needed updates to improve the safety of our country.
Serving and Protecting Our Veterans
Reformed the Department of Veterans Affairs (VA) to improve care, choice, and employee accountability.
Decreased veteran homelessness, and education benefits, and achieved record-low veteran unemployment.
Making Communities Safer
Signed into law landmark criminal justice reform.
Unprecedented support for law-enforcement.
Implemented strong measures to stem hate crimes, gun violence, and human trafficking.
Cherishing Life and Religious Liberty
Steadfastly supported the sanctity of every human life and worked tirelessly to prevent government funding of abortion.
Stood up for religious liberty in the United States and around the world.
Safeguarding the Environment
Took strong action to protect the environment and ensure clean air and clean water.Secured agreements and signed legislation to protect the environment and preserve our Nation’s abundant national resources.
Expanding Educational Opportunity
Fought tirelessly to give every American access to the best possible education.
Took action to promote technical education.
Drastically reformed and modernized our educational system to restore local control and promote fairness.
Prioritized support for Historically Black Colleges and Universities.
Combatting the Opioid Crisis
Brought unprecedented attention and support to combat the opioid crisis.
Took action to seize illegal drugs and punish those preying on innocent Americans.
In Conclusion
The Trump administration's accomplishments are about putting the interest of all Americans first and foremost. And really, despite all of the Democrats' efforts to stop him from putting the concerns and well being of Americans first, he accomplished a great deal of good for us.
It would be absolutely criminal to reverse what President Trump has done for Americans. But sadly, that's exactly what the Democrats will try to do as quickly as they can. And now, because the government is in the hands of Democrats who want to take vengeance and retribution against anyone standing against them, nothing is stopping them from fulfilling their dreams of creating a Communist America where the government is in total control of our lives.
Of course, the thought of Democrats wanting to make Americans bow conflicts with our desire to be free. When that happens, no one can predict what wrath may be heaped upon those who demand that we kneel. Kneeling in servitude to those in power is not the American way. Democrats may learn that very soon.
Tom Correa
Posted by Tom Correa at 9:58 PM