They Call It Chuck -- Provisions On A Trail Drive 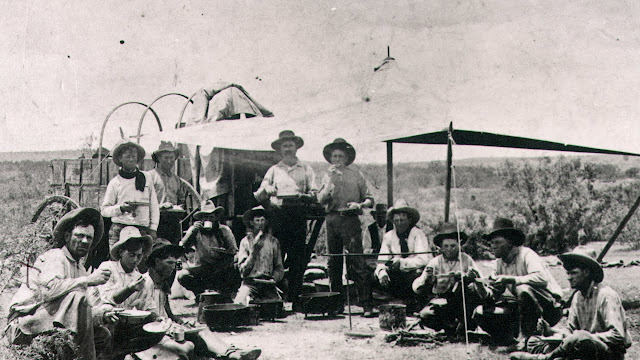 Most of us interested in the Old West know Charles Goodnight and Oliver Loving decided to partner up to drive cattle to livestock markets wanting beef. That was in June 1866. It's said that while cattle were selling for $5 to $10 per head in Texas, they could get five times as much in the North.
The demand for beef was there for a few reasons. The beef was needed to feed hungry settlers and soldiers, and also to meet government contracts to feed hungry Navajo which the U.S. Army had recently placed on reservations. But most of all, the demand made the cattle drive profitable because cattle were needed to ship to hungry Easterners after the Civil War.

There was a reason for that. With the massive influx of thousands of gold-seekers, both miners and merchants, they competed with the Native Indian population for wild game such as deer, bear, and turkey for food. Many Californians working on the ranches did the same as many others did and abandoned their jobs to go get rich in the hills and mountains. Because local cattle production dropped, and wild game was being depleted pretty rapidly, cattle from places like Texas and Southern California were seen as Godsends.
The killing of wild game, the traditional food source for local Indian tribes was so bad, that Indians in the Sierra Nevada Mountains started killing and eating what became known as "Sierra Elk." In response to the lack of wild game caused by the significant number of newcomers, and in retaliation for killing and eating all of the game, Indians started stealing and eating the miners' mules.
Cattle drives to Northern California brought in a lot of profit for those willing to drive cattle North. After the Civil War, the country was in challenging economic times -- especially in the South. The war took a horrible toll on the nation. Food shortages were commonplace after the war, and Eastern meat markets needed cattle to meet the growing demand for beef.
Charles Goodnight and Oliver Loving risk their lives trying to cash in on the need for cattle while making a considerable profit doing it. Goodnight did not use just one wagon for his cattle drive. I've read that he used two wagons. One was as a "Chuck-wagon" and the other as a "calf-wagon."
It is said that Goodnight bought two extremely durable U.S.Army-surplus covered wagons that were used in the Civil War. The wagons were manufactured by Studebaker. Goodnight outfitted the two wagons for different purposes for his drive from Texas to New Mexico.
On one, he bolted a "Chuck box" to the back of the wagon. The box had drawers and shelves for storage space and even a hinged lid that served as a flat work surface. It stored everything the cook and a helper would need to feed an outfit on a trail drive, including pots, pans, dishes, utensils, and more. On the Chuckwagon was also a "wagon-box," or two, which were used to store more cooking supplies and cowboys' personal effects. Bedrolls and arms were also carried on the Chuckwagon.
Here's a bit of trivia for you. As we know, "chuck" is a cowboy term for food. So why is that? Since "Chuck" is short for "Charles," and Goodnight designed of the first "cook-wagon," food is called "chuck" after Charles Goodnight. What started out as "Chuck's Wagon," later became "Chuck-wagon."
While the Chuckwagon was for the cook and the cowboy's personal effects including bedrolls, it's a fact that some cattle drives included a second wagon to carry calves during the day. The calves were released to their mothers to nurse at night. The calves that were born on the trail may not have been strong enough to walk the drive. At least not initially.
Chuckwagons had at least one water barrel attached to it and they used a canvas that hung under the wagons to carry kindly and firewood. Because a lot of the territory was initially uncharted and no one knew where water could be had, the calf-wagons carried an extra water barrel or two. The calf-wagon was also outfitted with canvas slings to carry kindling and firewood. So if you've wondered where their kindling came from when there were obviously no trees around. Besides the firewood that they carried to start a fire, they also used Buffalo chips for fires.
It's a safe bet that about now you're wondering when I'll start talking about the provisions part of this story. Well, here it comes. While it's not much, I'll try to make it interesting.
Besides easy to preserve sacks of flour, salt, sugar, multiple sacks of dried beans, and coffee, they also carried with them meats that were preserved. To preserve food at the time, foods were canned and meats were salted, dried, or smoked. The meat they ate was known to be "greasy cloth-wrapped bacon, salt pork, and beef which were all usually dried, salted, or smoked."
As for dried meats? Dried meats were very important to the cowboy, as well as the overall success of the cattle drives. Though drier and not as heavily seasoned, or tasty, as the jerky we have today, it provided needed protein and energy to the cowboys during their long days on the cattle drive. Besides hardtack, a cowboy always had some small pieces of dried meat in his saddlebag. Today's modern jerky is very similar to the cowboy version of dried meat from back in the day.
Another reason it was prized is that it was so easy to pack into a saddlebag, and like hardtack, a cowboy didn't need a fire or cook it when wanting a piece at any time of day under any weather condition on the drives.
In the case of hardtack, it was baked and then baked again. What's Hardtack? I was once told that hardtack was extremely cheap to make and there was always hardtack in the Chuckwagon, as well as in a saddlebag of almost every cowboy on the trail.
Hardtack is said to date back to Ancient Rome. We know that it's been in America for ages. It's believed Mountain Men carried them, and so did pioneers, miners, soldiers, and cowboys. It's simply a large cracker, what the Brits refer to as a biscuit, made with flour, water, and a bit of salt. They are baked repeatedly to suck as much moisture out of them as possible. They are exactly as they are promoted. They are almost tasteless, endurable, "hardtack." Baking them many times meant that hardtack would not spoil.

How resilient is hardtack? Let's put it this way, it is said that "troops in the Civil War were issued hardtack that was actually made during the Mexican-American War fifteen years earlier." Yes, sort of like the freeze-dried MRE's that our military uses today. They last forever.
Because hardtack is a bone dry large cracker that is extremely tough, and I did say dry, a lot of folks back in the day would soak it in coffee or water before eating it. As for a cowboy riding trail and wanting a "snack." It's wasn't unheard of for a cowboy to bite into hardtack and chase it with a sip of water from his canteen. The water would swell it in his belly.
During the Great Depression of the 1920s and 1930s, hardtack was a staple -- especially for the poor. When I was a kid, my grandparents used to buy saloon crackers (hardtack), break them up in a bowl and let them soak in milk before we ate them. No sugar, not so tasty. Add sugar, very tasty. It was then that I found out that sugar makes anything better.

As for what was served on the cattle drive?
It is believed that food was also gathered on the trail if found, but there were no fresh fruit, vegetables, or eggs. That's why cooks soaked dried beans and served a lot of beans daily. While they had a lot of names, some folks referred to them as "Mexican Strawberries." Sourdough biscuits were with every meal and had a few names including "sourdough bullets." While there is never pleasing everyone, sourdough biscuits were considered a treat.
Of course, cooks did serve beef and meats such as salt pork and bacon. Bacon was served and in some places was fondly referred to as "chuckwagon chicken." But as I said before, meats that they had were not fresh and were either salted, dried, or smoked.
Fresh meats were usually a bison if a bison was found and harvested, or an animal that had to be killed. Fresh meat on the trail may have been one of the herd, that may have become injured and had to be killed.
That leads us into talking about "Son-of-a-bitch Stew." We talked a little bit ago about the newborn calves. The calves that didn't make it even when they were helped by carrying them in the calf-wagon, actually ended up as part of the cattle drive's provisions. It was called "Son-of-a-bitch Stew" and it was made of the brains sweetbreads, and other voice pieces of a freshly killed calf. It's said that a cowboy would refer to it as "Son-of-a-Gun Stew" to be polite around women.
It's said that cooks seeing cowboys walking over to them with hands full of pieces and parts of a calf automatically knew they lost a calf. While "Son-of-a-bitch Stew" was seen as a treat, most meals on the drive didn't vary too much.
As for cowboy coffee on the trail drives, it usually came with every meal and had a bite to it. Cowboy coffee was a must as it was the drink of the day. While canteens were filled with water, I was always told they were sipped with a prayer. Coffee was the go-to drink for breakfast, noon chuck, and supper. It was the go-to drink for the same reason that whiskey and beer was such a big hit in the Old West. The reason is simple, water in the Old West was notorious for giving folks the trots.

Let's keep in mind, Giardia is a microscopic parasite found in the soil, in food, and in water that's been contaminated with feces from infected humans or dung from animals. Cattle and bison caused giardia which caused diarrhea. Dysentery is caused by a parasite or bacteria that infects your intestines that causes bloody diarrhea.

During the Civil War, it's believed over 45,000 Union troops died of dysentery which was often spread through contaminated food or water. Some say as many or more Confederates died from dysentery only. Boiling water stops such water contamination. Coffee, whiskey, and beer are all products that are boiled, and subsequently safer than drinking water. Especially in the Old West. Yes, there are reasons why coffee, whiskey, and beer are good for us.
Tom Correa